The Aman Initiative, launched in September, aims to educate Egyptians about sexual harassment, encourage women to report assault and train women to defend themselves in threatening situations. 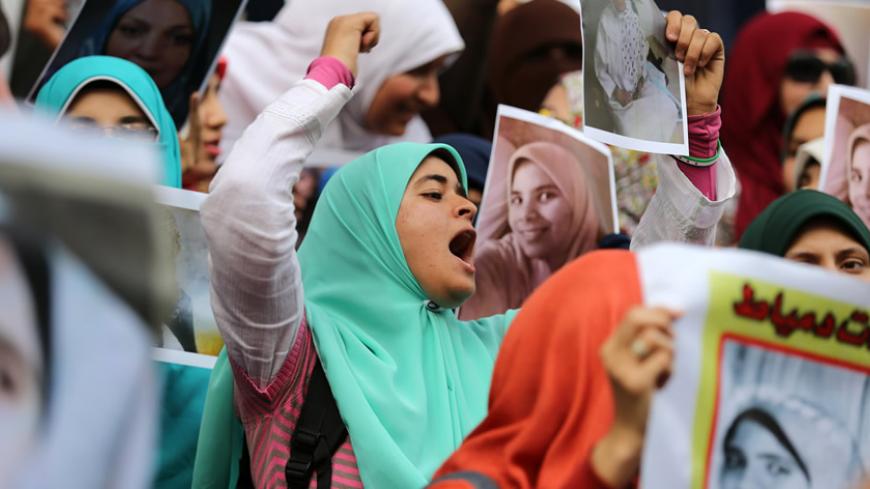 Female relatives of women prisoners shout slogans against the military and the Interior Ministry at an event called "Release Our Girls" during International Women's Day in front of the Press Syndicate in Cairo, March 8, 2016. - REUTERS/Mohamed Abd El Ghany

Sexual harassment is an all-too-real specter that has long haunted the streets of Egypt. It’s a well-known phenomenon, but the fear of its repercussions often silences its victims and obscures the true extent of the problem.

Even those willing to combat sexual harassment often face obstacles set up by the very security officials charged with preventing it. Yet despite the limitations imposed on anti-harassment programs, and the resulting decline in field work that is carried out, new initiatives are being launched.

In September, the Aman (Security) Initiative started under the wing of the Musawah Organization for Training and Counseling. The initiative aims to fight sexual harassment and secure peace and safety for women in Egypt.

It’s not that the issue has been ignored, as several achievements have been made recently after years of efforts by civil societies and the state. Among these achievements are the sexual harassment law — the first of its kind in Egypt, enacted in June 2014 — and the establishment of the first female-only police force in May 2013.

The founder of the Aman Initiative, Fathy Farid, told Al-Monitor about some of the achievements the initiative has been part of so far: helping to break the silence among victims — even helping them in some cases to appear on TV to tell their stories — and launching self-defense programs. But so much remains to be done.

He spoke about the group’s plans to shed light on the complexities related to women’s issues.

“Our goal is to support and encourage women to report any sexual violence or harassment to the police. We also aim to create a different image about women through various media outlets. This will be achieved using a number of tools — for example, organizing awareness campaigns to encourage men to refrain from exercising any sexual violence against women; reproducing anti-sexual harassment educational materials and translating them into colloquial Arabic to make communication with different groups among Egyptians easier; and observing and documenting how the media tackle harassment issues in Egypt.”

There are obstacles, such as a lack of funding. And it doesn’t help that there are conflicting statistics on the prevalence of sexual harassment in Egypt.

“These inconsistencies are found in reports issued by the United Nations, governments and civil societies, while the practices that degrade women and destroy their dignity either socially or politically are still ongoing,” Farid said.

After the January 25 Revolution in 2011, when sexual assaults skyrocketed, Egypt’s police sought to improve their image among a large sector of civil society organizations in Egypt, especially those focused on women’s rights. Therefore, in May 2013, the Ministry of Interior formed a directorate specialized in following the crimes of sexual violence against women to support survivors of sexual violence and facilitate their legal procedures.

“The solution to the sexual harassment issue will be achieved through reconstructing the Ministry of Interior and changing the undisciplined attitude of its individuals,” Farid said. One way of doing that is to increase reporting by women.

“Filing intensive reports of the sexual violence against women will force the Ministry of Interior to work on changing the attitude of its officers toward dealing with sexual harassment reports,” he added.

Farid also wants a system to bring to trial and punish police officers involved in sexual violence or harassment. He is also calling for a female police presence all over Egypt at all times, not only during holidays, when the rise in foot traffic increases the potential for encounters.

During the Eid al-Adha holiday last month, sexual harassment reports reached 174 in Cairo and Giza, compared with 156 reports during the same period in 2012.

Another problem the Aman Initiative and other groups face is police attempts to limit the initiatives. Several civil society groups said security officials kept them from monitoring areas and trying to prevent sexual assaults during the holiday.

Farid said the biggest dilemma such societies currently face is “their inability to work in the field in light of the security complexities that don’t allow them to be present on the ground, especially during holidays.”

Human rights institutions in Egypt have had some success in breaking the silence about sexual harassment, especially in 2008, when a woman openly announced that she had been sexually harassed. She insisted on bringing her attacker to trial and he was sentenced to three years in prison. As a result, more women began to talk about assaults.

In just one night in July 2013, more than 80 women reported they were attacked by mobs who raped or assaulted them during a now-infamous event in Tahrir Square. Seven men were sentenced to life and an additional 20 years in prison as a result of women coming forward.

Yet Reda al-Danbouki, the director of the Women’s Center for Guidance and Legal Awareness, indicated progress against sexual harassment is extremely slow in Egypt. “Girls fear stigma if they report sexual harassment; therefore — according to their own understanding and because of our backward society — they prefer silence over disgrace. In addition, the carelessness of police officers in filing harassment-related reports is another issue,” Danbouki said.

He said the center has received more than 300 reports of sexual violence and harassment against women, most of which were verbal harassment on social media, including 70 cases where the accused were sentenced from one to three years in prison.

The social media harassment is fairly new, according to Danbouki. Though harsh judgments are usually made against these cases for the sake of media propaganda, the cases often end up being dropped by the victim or written off by the police, he said.

After the 2011 revolution and subsequent spike in sexual harassment, the issue became one of the fiercest fights taken up by Egyptian women, to change society’s attitude toward victims and to win the government’s acknowledgment of the extent and seriousness of the crimes. There has been a considerable change in the way victims are being defended and how the offenders are punished. Yet, the long fight continues and many challenges remain to be overcome.