The administration and activist students at Cairo University are making progress against harassment and have started campaigns to encourage victims to speak up and to identify offenders. 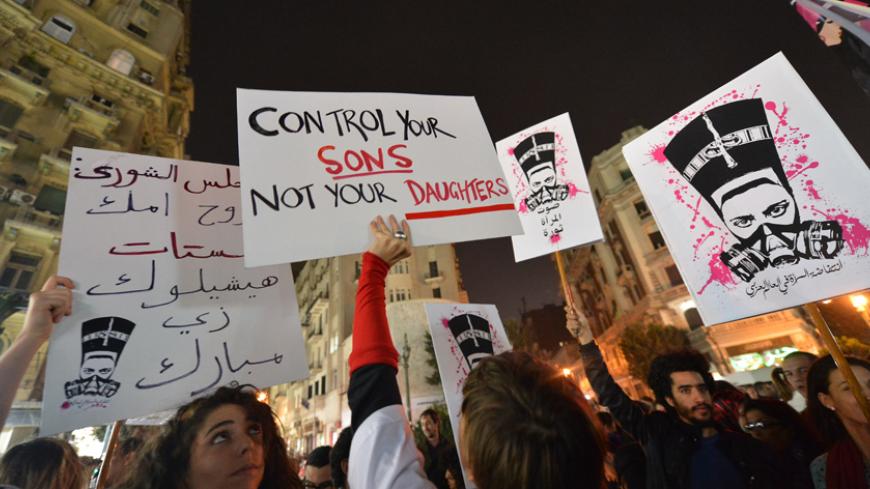 Egyptian protesters hold up placards and shout slogans during a demonstration in Cairo against sexual harassment, Feb. 12, 2013. - KHALED DESOUKI/AFP/Getty Images

CAIRO — A number of students at the faculty of computers and information at Cairo University launched the Speak Up campaign Dec. 24 to fight harassment on campus. Soha Abu Zeid, one of the spokeswomen for the effort, told Al-Monitor, “The campaign started as a project for the media campaigns course, which was being taught during the first semester of the current academic year. However, students decided to carry on with the activities for the second, current semester, although the course had ended.”

She further explained, “At the beginning, a work group chose harassment as a subject for the campaign. We conducted a poll among university students on the issue, as we had noticed an increase in the rate of harassment on campus, and the results of the poll confirmed our observations.”

Abu Zeid also said, “The campaign aims at encouraging female students to speak up about the cases of harassment they have faced on campus, as we have noticed that the main problem in harassment cases is the victims’ reluctance to talk about it. Therefore, we chose the title 'Speak Up' for the campaign. We are using social networking sites for participation and complaints of students who have been harassed on campus. The names of victims remain anonymous to preserve confidentiality.”

She spoke about one of the campaign's successes. “Based on the complaints we received from students who have been harassed, we discovered a recurring complaint against one of the teaching staff at the faculty of economics and political science. We then talked with the victims to persuade them to make a formal complaint against the accused before the Anti-Harassment Supreme Committee at the university. They actually did, and he was suspended from work and is currently being investigated,” said Abu Zeid. The anti-harassment committee was established in June 2014 as part of a university initiative.

Ibtisam Mukhtar, another Speak Up representative, told Al-Monitor that one of the campaign's goals is simply to raise awareness among students that there is an organization to fight harassment on campus, a fact not known to many. “During the first semester, we started communicating with female students only via social networking sites, due to time constraints and because the date of the campaign launch was close to semester finals. However, we are currently seeking to work more effectively among female students during the second semester. We will be organizing events and seminars at Ain Shams University and Helwan University in addition to organizing self-defense training courses,” Mukhtar said.

Mona Magdi, a professor of media campaigns in the information faculty at Cairo University and the campaign’s supervisor, told Al-Monitor, “The Anti-Harassment Supreme Committee has been cooperative with the campaign to a large extent. It had been encouraging the students in the faculty of economics and political science to file complaints against the aforementioned member of the teaching staff, working in utmost confidentiality for the sake of students during investigations.”

Maha Saeed, a professor in the faculty of arts and the chairperson of the executive committee of the Anti-Harassment Supreme Committee, said that she is impressed with the campaign’s performance. She met with the students who organized the campaign to help coordinate activities and is working with the campaign on events taking place during Women’s Week, March 8 (International Women’s Day) through March 15. “I wish that all students in the other faculties at Cairo University would follow suit and organize similar campaigns,” she said.

The campaign has faced some challenges due to the absence of financial support. As Mukhtar noted, during the first semester, the campaign relied solely on social networking sites, which did not require financial resources. Reaching out to students on the ground and organizing events can, however, necessitate funding, which, she thinks, will not be an impediment to the campaign. For now, it is a wait and see situation. “Perhaps the campaign would receive financial support from the university’s anti-harassment committee. There are also ongoing consultations and debates on whether or not to include the campaign in the UNESCO projects for educational development in Egypt, which would provide it with the necessary funding,” said Abu Zeid.

At the moment, according to Magdi, the campaign's members consist of “15 to 20 female students and one male student only, which is due to the high number of females in the information faculty as opposed to males.” The Speak Up campaign Facebook page has tallied some 4,000 likes and posts featuring more than 30 stories from students who have been subjected to harassment on campus. The campaign receives student complaints about harassment via ask.com and are then reposted on Facebook while keeping names concealed.

According to data from Nov. 27 from the I Saw Harassment (Shoft Ta7arosh) initiative, Cairo University’s performance in fighting harassment has been a failure. The initiative, in a “comment” on harassment news reported by news websites, demanded that the university adopt a clearer policy. I Saw Harassment consists of a group of volunteers who, according to their Facebook page, are “a pressure group to monitor, document and combat harassment crimes against women and to provide legal and moral support for victims in public places.”

During the 2013-14 academic year, Cairo University experienced some incidents of harassment that were made public through the media, including the harassment of a female student near the faculty of law in March 2014. This may have been due to the large number of journalists on campus at the time to cover student demonstrations, some of which led to clashes with security forces.

On Jan. 22, the president of Cairo University, Gaber Gad Nassar, announced that the university is investigating numerous incidents of harassment involving students and members of the teaching staff. UNESCO reviewed the Cairo University campaign to fight harassment and recommended its dissemination to universities around the world. According to a Feb. 14 media report, surveillance cameras set up in September 2014 at Cairo and Ain Shams Universities to primarily monitor troublemakers on campus have recorded cases of harassment.

It may be difficult for a university to eliminate harassment on campus, which might explain why students are launching their own campaigns. University administrations should nonetheless continue to deploy resources to eliminate harassment, because the students' campaigns may be transient, ebbing or flowing or possibly disappearing with graduations.