The Egyptian government imposed a lockdown on a village in Giza governorate after discovering several cases of the coronavirus, but it is helping the residents to get through this. 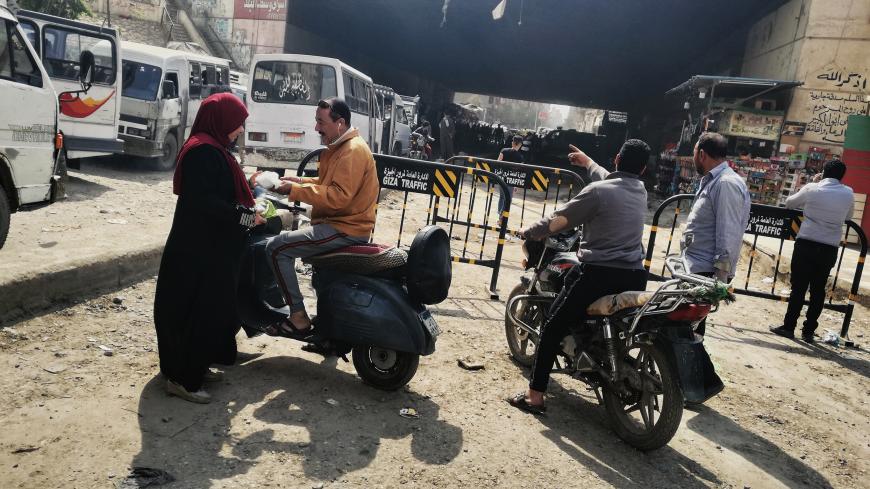 Egypt announced a lockdown on the village of al-Moatamdia after a number of coronavirus cases were recorded there. Here, the village is seen on April 8, 2020. - Mohamed Mostafa/NurPhoto via Getty Images

CAIRO — In an attempt to stem the spread of the novel coronavirus, Giza governorate imposed April 7 a lockdown on al-Moatamdia village, which is affiliated with the governorate’s Kerdasa municipal division, for 14 days and cordoned it off. The decision came after several cases of the virus that causes COVID-19 were detected in the village.

In this context, the governorate, commissioned by the government, took several measures to facilitate the lives of the village residents and delivered infant formula and medicines to those suffering from chronic diseases. It also provided ambulances to transport those critically ill to hospitals. Village residents have volunteered to provide services for the elderly and those suffering from chronic disease.

Alaa Wali, a member of parliament from Kerdasa, said April 8 in a phone call with "Aala Mas’ouliti" ("It Is My Duty") broadcast on Sada Elbalad satellite channel that a full lockdown had been imposed on al-Moatamdia as two people infected with the virus attended a wedding while two others attended a funeral service. He noted that nine people tested positive, while three of these cases had died, saying about 200 people have been in contact with them.

Wali noted that the decision was taken to protect the 100,000 residents of the village and to avoid having them infect people outside the village. He added that the village residents have been provided with basic necessities; some 1,000 meals and 500 boxes of food commodities have been distributed to people in need and to irregular workers, and cars carrying ATMs have been roaming the village to provide banking services to residents, as part of the government initiative.

A number of village residents have also been tested to determine the exact number of people who have been infected. Meanwhile, Giza governorate deployed several cars with PA systems in the streets to raise awareness of the coronavirus.

Ahmed Nabil, a village resident, told Al-Monitor that he learned that village residents had contracted COVID-19 through a video broadcast posted by the mayor on Facebook, and ever since local police has been enforcing the curfew imposed across Egypt.

He said that as soon as the lockdown was announced, security forces cordoned off the village. He noted that a large number of residents, especially the elderly, have been stuck at home, adding that some people have obtained permits to leave their homes to go to work, while others are sneaking to work through side streets.

Ahmed Amer, who volunteers to support the village residents, said that ever since the village was under lockdown, the residents have to stay in their houses as there is no reason to leave given that they have been provided with the necessary goods and supplies. He said the only obstacle is the local clinic that lacks some medicines and that they have contacted the Giza deputy governor in this regard.

Amer explained that he, along with 35 other young men, carried out disinfection campaigns in the village and distributed food with the help of several nongovernmental organizations.

Wali told Al-Monitor over the phone that the number of cases has not yet increased and that some suspected cases tested negative for COVID-19.

Despite the lack of commitment to stay at home on the part of some residents, the vast majority is abiding by the preventive measures, he added.

Al-Monitor tried to contact the undersecretary of the Ministry of Health in Giza governorate, Mohamed Mansour, but he said he was not authorized to talk about the coronavirus cases in al-Moatamdia village.

The Ministry of Environment has taken several measures to deal with the waste coming from al-Moatamdia by allocating April 8 a landfill area for the village's waste and a car for the disinfection of any equipment used within the village. It is also treating the village waste as hazardous and covering it with quicklime.

In addition, the ministry has set up a mechanism to get rid of insects and rodents that the waste could attract in order to limit the spread of the infection and has obliged waste workers to wear protective equipment while working.

Governor of Giza Ahmed Rashid said in a April 10 phone call to "Aala Mas’ouliti" that the governorate is fully ready to provide assistance to village residents during the lockdown. He added that mobile retail outlets are out on the streets to sell vegetables, meat and poultry, and those who had been in contact with the infected individuals are under close observation.

The isolation of al-Moatamdia comes in conjunction with the precautionary measures taken by the Egyptian government to halt the spread of the coronavirus, including the decision to impose a partial curfew on citizens on March 24 from 7 p.m. until 6 a.m., and the decision March 21 to close places of worship such as mosques and churches.

On March 19, Egypt shut down all restaurants, coffee shops, cafeterias, casinos, nightclubs, bars and shopping centers, and it suspended school and university classes on March 14.