Egyptian authorities isolated three villages to contain the spread of the coronavirus, as hospitals outside the capital struggle to keep up with the increasing number of infections. 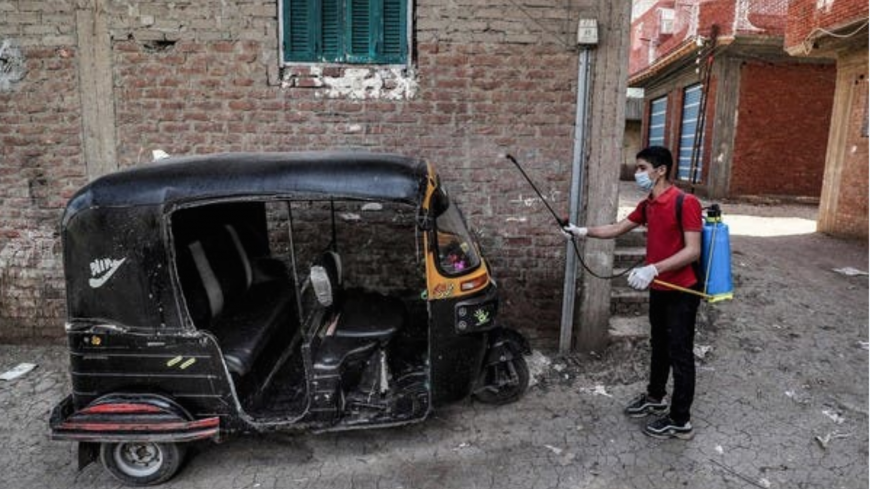 A volunteer wearing a face mask disinfects a tuk-tuk (motorized rickshaw) as a measure against the COVID-19 pandemic, in the village of Shamma in Egypt's northern Nile Delta province of Monufia on April 1, 2020. - MOHAMED EL-SHAHED/AFP via Getty Images

Shanshur, a small village in Monufia governorate, north of Cairo, was under full lockdown May 11-22 after 15 of its inhabitants tested positive for the novel coronavirus and three others died of the disease.

The lockdown was first imposed for a week and then renewed for another week in the village along with other two nearby villages: Brasim and Kom Ayad.

All shops in the villages were closed except for pharmacies, grocery stores and butchers. The authorities granted a week's pay to all workers in the public and private sectors and blocked travel to and from the village to everyone except for workers in the food and health sectors.

Security posts were erected at the entrances to the villages, on the main streets and on the streets where affected cases have been identified.

Shanshur resident Mohamed Magdi said, “The full lockdown was expected for the village, especially with the number of infected people rising in a short period to 15 cases and three deaths.”

Magdi told Al-Monitor, “It was necessary to stop activities decisively so that the epidemic would not spread among the villagers, especially since the village has many workers in a number of factories in different places.”

Osama Ahmed, another villager, said, “Despite the efforts of the village's young people in sanitization, residents were not following social distancing procedures and were thronging markets despite several attempts by volunteers and the local authorities to disperse them. There has been a lack of commitment to precautionary measures and wearing masks, leading to an increase in the numbers of infected people.”

“The first death took place on May 2 and within three days, two others died of the coronavirus,” Ahmed told Al-Monitor.

Ahmed Shadi, a resident of the nearby village of Shoushai, said that awareness of the anti-coronavirus measures in surrounding villages has increased. “People have started to be cautious of social distancing and disinfection after they saw people dying of the virus,” he told Al-Monitor.

Shadi added that young people have begun to take the initiative and sanitize the streets, raise awareness among villagers about the virus and sometimes distribute face masks for free for people who cannot afford to wear them.

Villages in Egypt suffer from poverty and lack of services and lack many basic requirements of life, including water, sanitation, health care and education, while unemployment and illiteracy rates are high.

Ahmed al-Qazzaz, head of the Ashmoun City Department in Monufia governorate, told the local press that Shanshur alone has a population of more than 15,000 people.

In April, the Egyptian authorities had cordoned off 11 villages across the country for two weeks due to the increase in infections.

Egypt has reported a significant hike in coronavirus cases over the past few days. On May 31, the Egyptian Ministry of Health acknowledged 1,536 new cases and 46 new deaths, with the total infections at about 25,000 and deaths reaching 959.

A doctor said on condition of anonymity that conditions at quarantine hospitals in governorates outside the capital are dangerous because of the large number of infected people and the lack of resources.

“Hospitals in these areas are not equipped at all. That is why precautionary measures should be intensified in those governorates in order to avoid a health disaster,” he told Al-Monitor.

In order to step up testing in the Arab world’s most populous country, on May 21 the Egyptian Health Ministry asked all public non-specialist hospitals to offer testing for suspected cases.

From the beginning of May, the Health Ministry has also been housing coronavirus cases in hostels and hotels in order to lower the pressure on hospitals.

Pressure has increased on state agencies as Egyptians stranded abroad have started to return. Egypt has been operating flights in recent weeks to return Egyptians stranded abroad but with tens of thousands of citizens, accommodating all of them has become a challenge. On May 19, Egypt reduced the quarantine period from 14 to seven days for Egyptians returning from abroad in an attempt to reduce quarantine costs.