As Egypt fights the spread of COVID-19, misinformation and conspiracy theories are making it difficult for Egyptians to distinguish fact from fiction. 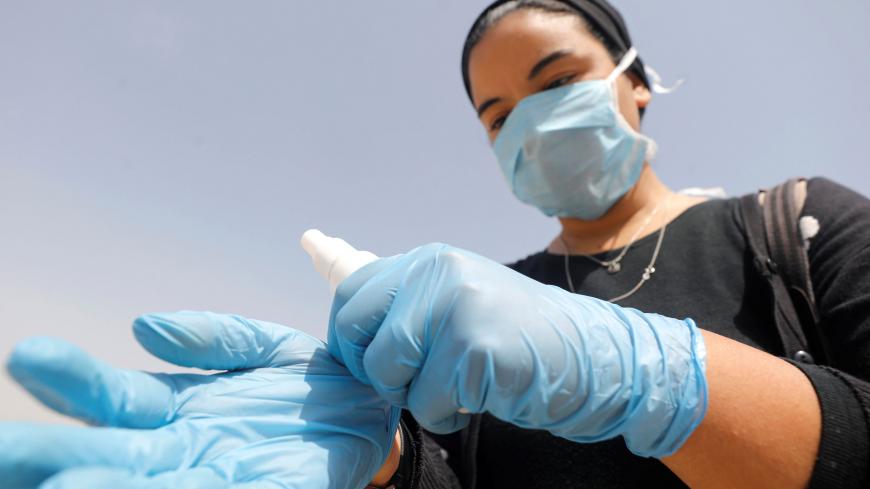 A woman wears a protective face mask and gloves while working as Egypt ramps up its efforts to slow down the spread of the coronavirus, Cairo, Egypt, March 25, 2020. - REUTERS/Mohamed Abd El Ghany

When initial reports of the new coronavirus surfaced in Egypt in February, Egyptians responded with denial. The Egyptian media, many internet users and a handful of celebrities dismissed COVID-19 as a hoax and even joked about it.

Asked about the threat from COVID-19, Egyptian film stars attending the opening ceremony of the Luxor African Film Festival mocked the pandemic.

"We eat salted fish and onions, are you joking? What coronavirus are you talking about? The coronavirus will fall ill if it comes to Egypt," joked actress Zena.

"We are Egyptians, nothing scares us," comedian Badria Tolba told reporters. "We are being asked to avoid large gatherings, but we continue to gather; they advise us not to kiss, but we kiss each other all the time."

"I actually like Corona with milk and Turkish delight," she added, referencing the Egyptian chocolate brand that shares the virus' name. A video clip of her remarks spread quickly, sparking controversy on social media.

In the early weeks, after news of the pandemic broke, the media promoted the narrative that Egypt is "untouchable" and that Egyptians "are immune" to coronavirus.

Talk show hosts across Egyptian TV promoted the message that "Egypt is protected by God. No harm can befall us." Clerics propagated a similar message on social media. In one video, a preacher tells worshippers in his Friday sermon: "Muslims shouldn't fear coronavirus. They perform ablution five times a day, which makes it impossible for them to get infected." In another online video, a Coptic Orthodox priest in Assiut asks his congregation to repeat after him, "If we pray from the bottom of our hearts, coronavirus won't come anywhere near us."

Veteran TV presenter Sanaa Mansour said on her show on the DMC satellite channel, "We drink our water and don't get sick so it seems we [Egyptians] have developed a natural immunity to viruses that kill people elsewhere." Her comment was a reference to the poor quality of Egypt's drinking water, generally considered unsafe.

Said Sadek, a political sociologist at Nile University, attributed such misconceptions to Egyptians' perception of themselves as resistant to external factors. "We have a saying, 'Egyptians eat pebbles,' which basically means we can overcome practically anything," Sadek told Al-Monitor. “This is the result of a media narrative that persistently inflates our self-image. It also stems from the fact that many poor Egyptians struggle on a daily basis and yet miraculously manage to survive. They are inclined to underestimate the threat of the virus because the way they see it is: How does a virus that causes flu-like symptoms compare to the hardships we face every day?"

After the suspension of international flights to and from Egypt in mid-March, initial skepticism gave way to anxiety and fear, which, in turn, prompted even more misinformation about COVID-19. Fake news flooded Egyptian TV, including a host of alleged COVID-19 cures and prevention methods. TV anchor Amany El Khayat suggested on her show on Extra News that "drinking tea is a sure way of killing the virus in the throat before it reaches one's chest."

In a live TV interview on al-Nahar satellite channel, former TV presenter Moufid Fawzy claimed that India was the only other country besides Egypt that was coronavirus-free "because spices that are high in chromium are widely consumed in the Indian diet." While chromium has indeed been found to help metabolize fats and control blood sugar, spices are by no means the only source of this essential mineral, also found in whole grains, cereals, mushrooms and a variety of other foods. More importantly, no medical evidence supports Fawzy's claim that chromium helps prevent the spread of coronavirus.

Egyptian social media is also rife with fake coronavirus cures. In an audio file making the rounds on Facebook and Twitter, a woman shares what she claims to be "a magical cure for the new virus: gargling with warm salty water three times a day."

“I tried it myself after coming down with what I'm pretty sure was coronavirus disease. It cured my cough instantly and relieved the pain in my throat," she says.

Scores of Egyptians defied the government's calls to stay home and flocked to the beaches in Alexandria the weekend of March 27. The move prompted Alexandria Gov. Mohamed El Sherif to order the closure of all Alexandria beaches, effective March 29.

Some traders, meanwhile, are exploiting fear of the pandemic by promoting their products online as cures to prevent or treat the coronavirus. One herbalist reportedly put up a sign in his store reading "anti-coronavirus anise seeds sold here," according to the news portal El Balad. He also published a picture of the product on social media, evoking interest among some internet users who asked where they could buy the anise seeds, El Balad reported.

The spice, used to enhance flavor in food or consumed as an herbal tea, is known for its therapeutic benefits, including the improvement of digestion.

Another online rumor advocates consuming onions and garlic to protect against coronavirus. In a sarcastic tweet, comedian Mohamed Henedy argued that this would be a good way to help people self-isolate.

Conspiracy theories also abound. A popular theory among Egyptian internet users claims that Chinese bat soup is the origin of the virus. The belief gained ground after false claims circulated online that the Egyptian Ministry of Health was checking Chinese restaurants for the new coronavirus. It led to an apparent spike in xenophobia against the Chinese in Egypt. A shocking online video shows a Chinese man running back and forth on a busy Cairo street, trying to get a lift. Drivers ignore his signal for them to stop and a car nearly runs him over. This is after the driver he had been riding with abandons him — and the car — for fear of becoming infected. The driver is earlier advised by another driver to dump his Chinese passenger on the road. The Chinese man who seems bewildered by the disappearance of the driver is also mocked by Egyptians shouting "corona, corona!"

Egypt's pro-government media, meanwhile, are pushing the idea that coronavirus is a lab-manufactured biological weapon to destroy the Chinese economy. Advocates of this conspiracy theory made no mention of where the virus may have originated. TV presenter Basma Wahba devoted an episode of her daily show on the ONE channel to biological warfare in early February. "Machine guns and cannons are no longer the weapons used in today's wars. Some countries resort to bio-weapons to target the economies of other states," she said.

Other talk show hosts like Ahmed Moussa attempted to politically exploit the pandemic. He accused the outlawed Muslim Brotherhood of spreading coronavirus. "Malaysia is among the countries hardest hit by the new virus because it has given refuge to exiled members of the group," Moussa said on his show on Sada al-Balad TV channel. "Wherever the Muslim Brotherhood goes, crises emerge!"

But perhaps the weirdest — and most chilling — phenomenon to arise from the pandemic is the spread of apocalyptic prophecies. An online video published March 23, shows a man standing in front of a mosque and claiming to be "the awaited Mahdi," or savior. According to the sayings of Prophet Muhammad, or hadiths, the Mahdi is a descendant of the prophet who will appear before Judgement Day to rid the world of injustice, oppression and other evils. "I am the Mahdi sent by Prophet Muhammad to spread his message across the world, there is no prophet after me, for I am here to redeem you," the man shouts.

Sadek is not surprised. "In uncertain times, it is not uncommon to find some power-hungry people who make tantalizing promises to change the world," he said. "Very often, those are cult leaders or attention seekers from poor backgrounds. They appear in marginalized areas where the residents are also poor and uneducated and so are more likely to be influenced."