The new Egyptian-Chinese Entrepreneurs Association will foster the growing economic relations between Cairo and Beijing as China intensifies its political activities with Washington’s allies in the Middle East. 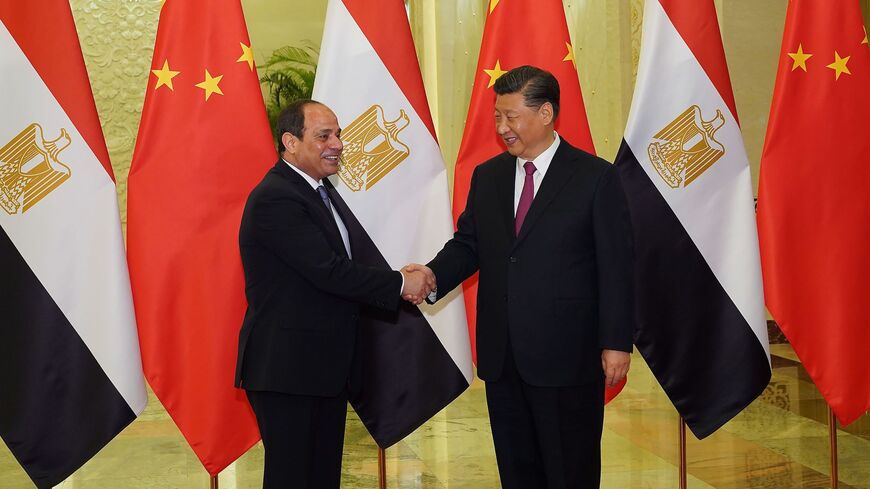 Egypt President Abdel Fattah al-Sisi (L) shakes hands with President of the People's Republic of China Xi Jinping (R) as they meet at the Great Hall of People in Beijing on April 25, 2019. - ANDREA VERDELLI/AFP via Getty Images

CAIRO — Egypt and China have created the Egyptian-Chinese Entrepreneurs Association to encourage Chinese investments in Cairo. The new association was formally established in a ceremony held in Egypt’s Administrative Capital Nov. 28 in the presence of Egyptian and Chinese officials and businesspeople including Egyptian Finance Minister Mohamed Maait.

Majd al-Din al-Manzalawi, chair of the new association's board of trustees, told Al-Monitor that this is the first association of its kind. Under the Ministry of Social Solidarity, the new civil society organization will be concerned with developing investments between the two countries, with the encouragement of the Egyptian government in cooperation with the Chinese Embassy in Egypt.

During the inauguration ceremony, Maait said that the Egyptian government and the Chinese Embassy are keen to establish the association with the aim of deepening strategic partnership relations and building bridges of economic, commercial and cultural cooperation between the two countries.

He explained that the association is a new platform for dialogue between the two business communities and said, “We look forward to removing any obstacles that may face efforts to maximize investments, given the good reputation enjoyed by Chinese companies operating in Egypt.”

“Egypt opens its doors to Chinese investments, which have increased significantly over the past 10 years,” Maait said, adding that Egypt recently acquired the largest proportion of Chinese investments in the Arab region, which amounted to about $28.5 billion from 2018 to 2019. This gain contributed to providing 24,000 job opportunities in Egypt, he added.

“We [also] aim to issue Chinese yuan (Panda) bonds at a value of $500 million in the Chinese market,” Mait continued.

The Egyptian minister stressed the pivotal role played by the Suez Canal Economic Zone in promoting China's Belt and Road Initiative, particularly through the China-Egypt TEDA Suez Economic and Trade Cooperation Zone. About 140 Chinese companies operate in the Egyptian market, including 102 in the TEDA zone, which includes 102 companies and investments amounting to $1 billion, according to Maait.

The two leaders had signed an Egyptian-Chinese strategic partnership agreement in 2014, and Egypt has participated in the Silk Belt Road initiative since its inception in 2017.

According to data from the Egyptian Finance Ministry, the volume of Egyptian imports from China amounted to $12.1 billion during the first 10 months of 2022, with Egyptian exports to China worth $385 million during the same period.

“We aim to exploit these strong relations to increase economic and cultural cooperation between Egypt and China, and the governments of both countries support our goals,” Manzalawi said.

The newly founded association will serve as a launching pad for Chinese investors in the Middle East and Africa within the framework of the Belt and Road Initiative, according Manzlawi.

Economic analyst Ahmed Amin told Al-Monitor that China seeks to benefit from the great advantages of the massive Egyptian market, which includes more than 100 million consumers, as well as Egypt’s position as a hub for trade in the Middle East and Africa.

“At the same time, Egypt wants to be a link between China and other countries,” Amin said, adding, “That is why the two governments sought to establish this association to remove obstacles facing Chinese companies.” Amin expects an increase in Chinese investments in Egypt in the coming period.

Egypt's former foreign minister and secretary-general of the League of Arab States, Amr Moussa, will chair the ECEA's board of trustees. “The economic Belt and Road project between China and the Arab countries has transformed the idea of cooperation from colonial to cooperative economic thinking, and can support the Egyptian-Chinese movement forward,” Moussa said during the ceremony, stating the need to direct Chinese investments to develop the Suez Canal, establish joint industries and export products to the African market.

Nadia Helmy, a political science professor at Beni Suef University, told Al-Monitor that China sees Egypt as a cornerstone of the Belt and Road Initiative. “That is why Beijing provides great political and economic support to Cairo, granting it huge financial loans and directing its companies to invest in Egypt during the past years,” Helmy said.

The Chinese Embassy in Cairo has recently intensified its political activities following the 20th National Congress of the Communist Party of China in October that granted the president a historic third term at the helm of the party.

On Nov. 3, Chinese ambassador to Cairo Liao Liqiang held a conference with representatives of 14 Egyptian political parties and organizations and another symposium was organized on Nov. 10 to share the outcomes of the party conference.

Another conference with Arab diplomats in Cairo to prepare for the Chinese-Arab summit that will take place during the visit of the Chinese president to Riyadh later this month.

Liqiang told Egyptian politicians that Chinese-Egyptian relations have evolved into a comprehensive strategic partnership and have continued to develop under the personal leadership of Xi and Sisi.

A poll conducted by the Washington Institute in September showed that more than half of the Egyptian population attaches significant importance to their country’s relations with China, surpassing the United States, as 47% of Egyptians agreed with the statement, “We cannot rely on the US these days, so we have to turn to Russia or China as partners.”

Helmy said that the Egyptian rapprochement with China will give Cairo the opportunity to join and benefit from the BRICS summit. Egypt's president arrived on Thursday in Riyadh to participate in the summit and met with Xi Jinping, according to his office.

Mohammed Soliman, director of the Center for Strategy and Emerging Technology at the Middle East Institute in Washington, told Almonitor, “Egypt is a pillar of China’s Middle East policy, which also includes Saudi Arabia, the UAE and Israel.” He added, “The summit is an important milestone for Chinese-Arab relations, but not transformative or pivotal.”

He explained, “Washington is laser focused on China’s activities in the Middle East and how this could impact American bilateral relations with regional powers,” but “The Arab states prioritize their own interest in this era of great power competition, and the China-Middle East summit should not be seen as Arab capitals choosing China over the US.”