China is growing its ties to Egypt with a deal with the government for Egyptian schools to offer the Chinese language. 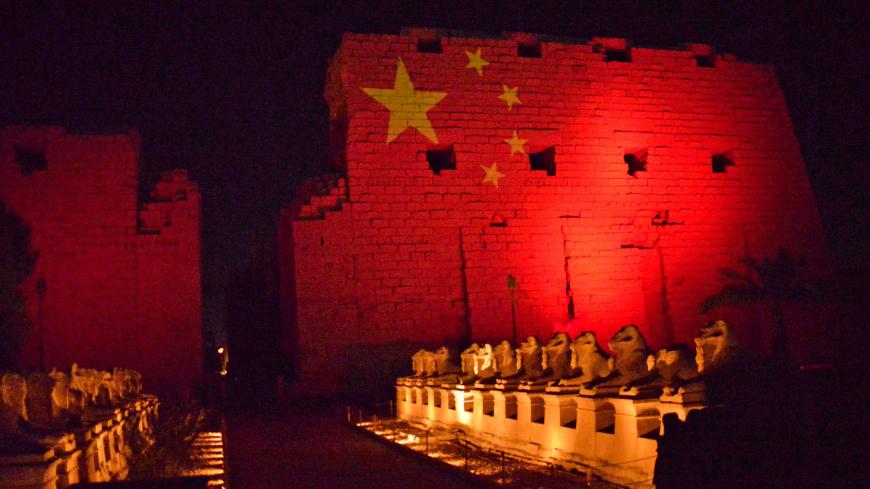 The Karnak Temple in Upper Egypt's ancient city of Luxor is pictured on March 1, 2020, with the Chinese flag in solidarity with the Chinese people amid a global outbreak of COVID-19, which originated in China. - AFP via Getty Images

CAIRO — Egypt’s Minister of Education Tarek Shawki signed a cooperation protocol with China’s Ambassador to Egypt Liao Liqiang to include Mandarin Chinese as an elective foreign language in Egyptian schools.

The agreement, signed Sept. 7, is part of growing Egyptian-Chinese relations as China seeks to expand its presence in one of the Middle East and North Africa's largest countries. But an Egyptian-Chinese partnership does run the risk of displeasing the United States in light of its trade war with China.

In an interview with Al-Monitor, Deputy Minister of Education Mohamed Mujahid said that under the agreement, Chinese specialists and volunteers with the Confucius Institute, a center for exchange and cooperation affiliated with the Chinese Ministry of Education, will be sent to train Egyptian teachers who speak the language on teaching it to middle, high school and technical school students.

Mujahid said Egyptian students are taught English as a first foreign language and they get to choose a second language to study among French, German, Italian and Spanish. Following the agreement, Chinese will be added to the list.

He said that the agreement “is a step in the right direction and an asset to Egyptian students," explaining, "China has common interests and trade partnerships with Egypt, and we must keep pace with this development.”

Mujahid noted, “The protocol involves mechanisms to encourage and motivate students to learn Chinese, such as offering outstanding students grants to study in China. Also, the protocol offers a chance for technical school students to obtain training in Chinese companies.”

He went on, “The agreement will not be implemented this year since the academic year in Egypt begins this month. There are arrangements that need to be made by the Chinese side and teachers need to be trained first. It may come into play with the next school year.”

In a speech at the signing ceremony of the cooperation protocol on Sept. 7, Egypt’s Minister of International Cooperation Rania al-Mashat said Chinese grants and low interest loans to Egypt amount to $1.835 billion, which includes $1.5 billion for the transportation and housing sectors, and grants of $335 million in higher education, scientific research, technical education and space technology.

China’s embassy to Egypt wrote in a Sept. 7 Facebook post, “Together we will witness history being written. … We hope that learning Chinese serves to build the Egyptian people’s livelihood and economic prosperity.”

Nada Mogheeth, an Egyptian researcher at the Chinese Xiamen University, called the agreement a major breakthrough in Egyptian education, but said that societal and cultural challenges may impede its implementation.

She told Al-Monitor that a similar agreement for Chinese to be taught in Egyptian schools was signed in 2004, but problems such as a lack of demand and a shortage of teachers have hindered its implementation, she added.

Cairo-Beijing relations have strengthened since President Abdel Fattah al-Sisi took office in 2014. Sisi visited Beijing six times in five years and met his Chinese counterpart Xi Jinping. Egypt and China signed a strategic partnership agreement in 2014 and Egypt has also participated in China's Belt and Road Initiative since it was launched in 2017.

Mogheeth said, “The demand for the Chinese language continued to grow slowly until 2014, when Cairo-Beijing relations began to warm. The Chinese language is now taught in 25 Egyptian colleges graduating nearly 2,000 students with degrees in Chinese per year. In addition, the Confucius Institute opened centers in two universities [Cairo and Suez Canal] in addition to classes in four other universities.”

She said explained China perceives Egypt as a hub for cultural expansion in the Arab region and Africa, noting, “There is swift Chinese expansion that includes promoting the language in the Egyptian education sector, and it seems that there is a strong Chinese desire to implement this agreement now.” Yet its implementation remains dependent on having a sufficient number of Chinese language teachers in Egypt and curriculum development, she added.

In a Sept. 9 press conference, Ambassador Liqiang said, “The agreement is a reflection of the bright image of the two countries’ friendly relations.” He said that Egyptian-Chinese cooperation is back on track after a dip due to the pandemic, as the two countries' trade volume hit $6.67 billion in the first half of this year.

Amid the coronavirus crisis that began in China, Egyptian Health Minister Hala Zayed flew to China in late February, and Beijing sent Cairo medical supplies in April and May.

Nadia Helmy, a professor of political science and specialist on Chinese affairs at Beni Suef University, said the agreement points shows how close political and economic relations between Cairo and Beijing have become. Helmy told Al-Monitor, “China is a superpower that has veto rights in the international community [in reference to the United Nations]. It has a large market that Egypt must benefit from through cooperation and learning the language.”

She said, “The agreement reflects Egypt's strategy to diversify relations instead of limiting itself to teaching Western languages to students. Meanwhile, Beijing's interest is clear in its plans to strengthen its presence in Egypt.”

Nevertheless, the growing closeness “may stir US concerns amid the competition between Washington and Beijing,” according to Helmy.

In August 2019, the Washington Institute reported that Beijing seeks to benefit from Egypt's position in the Arab world and Africa at a time when Egypt seeks to diversify its foreign relations and military options.

Imad al-Azraq, the head of the independent Tahir Center for Studies and Research and a specialist on Chinese affairs, said that Egypt considers relations with China key to achieving balance between East and West and is careful not to antagonize Washington in its outreach to Beijing.

China in the Mideast
Education