After Egypt suspended its flights with China, concerns emerged about the supply of Chinese products and raw material, as well as price hikes. 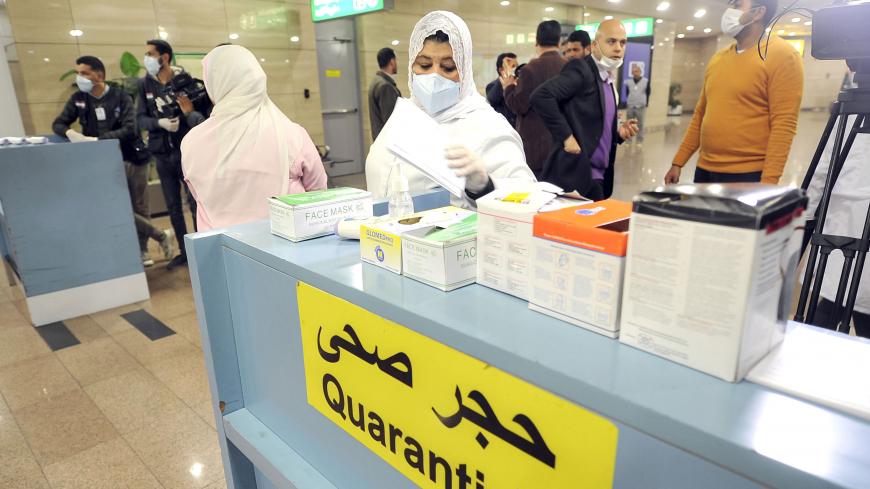 The coronavirus might change the old saying, “When America sneezes, the world catches a cold.” With rising global concerns about the fatal virus, America has been replaced with China, which topped the world’s merchandise traders in 2018, according to World Trade Statistical Review 2019.

As for Egypt, the impact will trigger price hikes if the crisis gets out of control, economists and traders said, citing possible declines in cheap imports from China.

On Jan. 28, in an immediate response to the crisis, the Importers Division at the Federation of Egyptian Chambers of Commerce warned Egyptian importers, estimated at around 60,000, against traveling to China.

The country’s national carrier, EgyptAir, said Jan. 30 it would suspend its flights from and to mainland China until Feb. 29. The suspension began on Feb. 1.

“Hangzhou flights will be suspended starting from Feb. 1 and then Beijing and Guangzhou starting from Feb. 4, until the situation stabilizes. This decision is to keep EgyptAir’s customers and cabin crew safe and to avoid the coronavirus [that is spreading rapidly] recently in mainland China and other countries,” the company said in a statement on its website.

“There has been no impact on Egypt yet. The picture will be clearer soon,” Ahmed Shiha, former head of the Importers Division, told Al-Monitor.

“There are two scenarios for this crisis. In case of escalation, there will be a direct impact on all countries, including Egypt, because China is the world’s top exporter. So far we have seen South Korea's Hyundai shutting down five plants [in South Korea] due to lack of automotive parts imported from China,” Shiha noted.

“As for Egypt, in that prolonged scenario, the impact will affect both the industrialists and consumers as China accounts for around 25% of Egypt’s total imports. Closure of Chinese seaports will stop supplies of merchandise to Egyptian manufacturers and merchants. That will hike up prices on the local market,” Shiha said, adding that China is Egypt’s top supplier of electronic devices, electrical appliances and textiles.

Shiha said many Egyptian industries — namely electronics, textiles and automotive — depend heavily on China, which exports most of manufacturing inputs to Egypt.

In a bid to soothe public worries, the Vegetables and Fruits Division of the Cairo Chamber of Commerce said Feb. 9 that Egypt’s food imports from China are garlic, carrots and green ginger. “Imports of these items have been suspended [since the outbreak of the virus],” it said in a statement.

“In the second scenario, the impact will be very limited if the Chinese authorities contain the crisis fast. Egypt’s imports from China stand at around $14.5 billion to $16 billion [annually] of which roughly 85% are raw materials and manufacturing inputs,” Shiha said.

“I believe there would be an impact if this crisis continues. The longer the coronavirus persists in China, the more serious the impact will be on global trade and the world economy in general. In this case, Egypt will be affected by a decline in Chinese exports,” Rashad Abdo, head of the Egyptian Forum for Economic and Strategic Studies, told Al-Monitor.

“However, if the Chinese put an end to the coronavirus fast, there would be no impact whatsoever on trade and world tourism,” Abdo said, pointing out that the spread of the virus would also consequently impact Chinese tourist arrivals in Egypt.

Following the flight suspension to and from China, tourist arrivals are expected to decline. Mohamed Othman, head of the Cultural Tourism Marketing Committee in Luxor, told Al-Masry Al-Youm news portal on Feb. 2 that companies operating in the Chinese tourism market were directly affected.

“The outbreak of the coronavirus started during the Chinese public holidays. The Egyptian merchants have a large stock of Chinese-made merchandise. The local market is still intact. With the crisis exacerbating, the consumers in Egypt will be affected as prices of electronics, for instance, will shoot up,” Abdo explained, referring to China's spring festival between Jan. 24 and Feb. 2.

From the global perspective, the world economy would be highly affected if the coronavirus turns epidemic, Abdo said.

“A slowdown in China would inevitably usher in a decline in global demand for fuel and raw materials. China is the world’s top importer of oil and natural gas. Moreover, American manufacturers rely heavily on cheap Chinese-made inputs,” Abdo said, noting that the sooner the crisis ends the better for China and the world economy as a whole.

However, some Chinese companies may be gainers if the coronavirus is well contained, Abdo said, pointing out that a number of European firms operating in China may exit.

“The Chinese investors would take over these firms cheaply,” he concluded.