Turkey’s clothing and textile sector, a vital source of employment and revenues, has become the worst-hit industrial branch in the coronavirus crisis, taking both domestic and external blows. 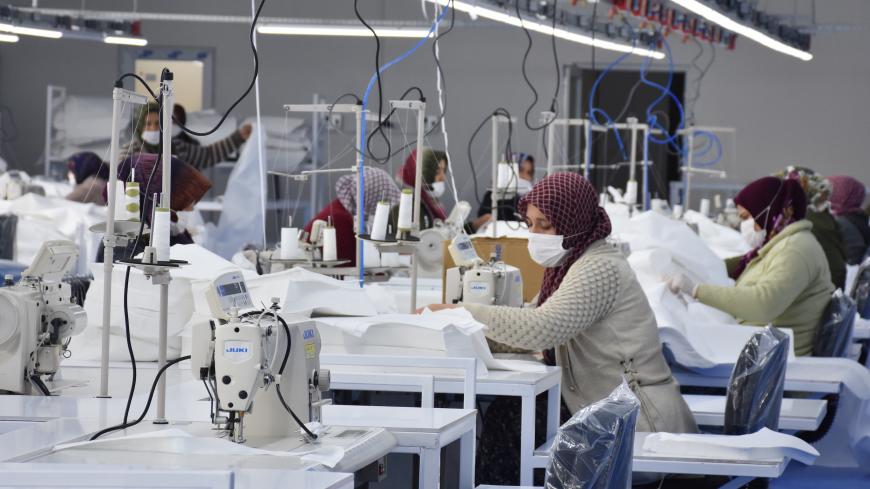 Turkey’s clothing and textile industry — the most crucial branch of the country’s economy in terms of production, exports and employment — has emerged as the worst-hit industrial sector in the coronavirus pandemic, with no apparent prospects of a quick recovery.

Industrial production data, released by the Turkish Statistical Institute last week, shows that clothing and textile production in March, when the coronavirus officially reached Turkey, shrank respectively 20% and 14% from February, while the overall decline in the manufacturing industry stood at 7.5%. The downtick has apparently continued since then and the outlook reportedly remains far from promising for June.

Clothing and textiles have been among the first items that households forego during the pandemic, resulting in some of the sharpest slumps in consumer demand globally and raising the specter of unemployment for hundreds of thousands of workers in the sector, especially in Asia. The entire global chain, from cotton and fiber suppliers to retail shops, has been affected.

Turkey’s clothing and textile industry — one of the country’s most deep-rooted manufacturing branches — has drawn both on domestic demand from an 83-million population and foreign demand, mainly from Europe, to thrive and grow into a heavyweight in the Turkish economy. For years, Turkey has ranked among leading producers in the global apparel and textile sector, where manufacturing has concentrated in emerging economies, mostly in Asia, while wealthy developed nations are the main consumers. China, India, Pakistan, Indonesia and Bangladesh are the top producers today. Turkey is the world’s sixth-largest exporter of textiles and the eighth-largest exporter of ready-to-wear. In the European Union market, Turkey ranks third in terms of ready-to-wear sales after China and Bangladesh, and second in terms of textiles after China.

The pandemic-induced decline in Turkey’s clothing and textile sector is of concern to a population much larger than it might seem at first glance. The industry employs some 1.3 million people, including unregistered workers, in the manufacturing field, but an equally large labor force works in distribution and marketing. Also, cotton growers represent a significant part of the agrarian population, though their numbers have decreased in recent years.

Central bank figures show that credit card spending on clothing in the eight weeks since March 11, when Turkey confirmed its first coronavirus case, decreased 64% from the eight weeks prior to the outbreak. Overall credit card spending was 30% down in the same period. Accordingly, the share of clothing spending fell to 3.5% of total spending from 7.5% before the pandemic, as consumer demand focused mostly on food and health and cleaning products.

The shrinkage in the domestic market has been mirrored by a decline in exports, a vital source of hard currency for the Turkish economy, which was still reeling from a severe currency shock in 2018 when the pandemic hit.

Clothing and textile producers contribute up to 15% of Turkey’s exports, almost on par with the leading automotive sector. While the automotive industry accounts for 8% of imports, the share of the clothing and textile sector is 3%, making it one of Turkey’s few sectors that are net exporters, along with, most notably, the food sector. Imports of cotton, the main raw material of the industry, have grown in recent years, but local cotton producers continue to partially supply the sector. So, the clothing and textile industry could be termed as one “rooted” at home. For all those reasons, the turmoil in the sector has far-reaching repercussions.

In January and February, Turkey’s apparel exporters sold goods worth $3 billion to foreign markets, helped also by the depreciation of the Turkish lira. With the spread of the pandemic, especially in Europe, the principal market of Turkish-made apparel, exports fell by a staggering 40% to $1.8 billion in March and April.

Restrictions to contain the pandemic, coupled with sagging demand, have forced leading international brands such as Nike, Adidas, GAP, H&M and Macy’s to temporarily close their shores in an array of countries. The shares of many big apparel companies lost up to nearly 50% of their stock market value from late February to mid-March, and the downtick has yet to reverse.

On May 11, shopping malls reopened across Turkey in a controversial move that, many fear, could inflame the outbreak. Though the decision has pleased mall owners, tenants selling apparel have had few reasons for optimism as domestic demand remains dormant and foreign tourists have yet to return. Shop tenants are now pressing for new rent arrangements, demanding that rents be pegged to turnovers.

Istanbul, Turkey’s economic powerhouse and the main hub of the clothing industry, has become the epicenter of the pandemic in the country, accounting for about 60% of cases, according to limited geographical data released by the Health Ministry. The apparel sector in the city has been the worst hit after businesses in the services sector.

Istanbul contributes 31% of Turkey’s gross domestic product and the clothing sector is the backbone of both industry and commerce in the city. Istanbul is home to 68% of Turkey’s apparel businesses and 49% of workers in the apparel industry. In the textile sector, 39% of businesses and 16% of workers are located in Istanbul. In both sectors, Istanbul is the center of wholesale and retail trade, with hundreds of thousands of employees.

In sum, shrinking production and marketing in the clothing sector has severely hit employment in the city. Among those left jobless are many unregistered workers, including refugees and illegal migrants who live off very low wages.

Besides the decline in domestic demand and exports, Turkey’s clothing sector has lost customers also from the abrupt halt in the tourism industry, which brought nearly 52 million foreign visitors to the country last year.

With the impact of the pandemic so complex and far-reaching, the sector’s return to “the old normal” is likely to be slow and arduous.