Declining production in key industrial sectors is seen as an omen that the worst of Turkey’s economic crisis might still be to come. 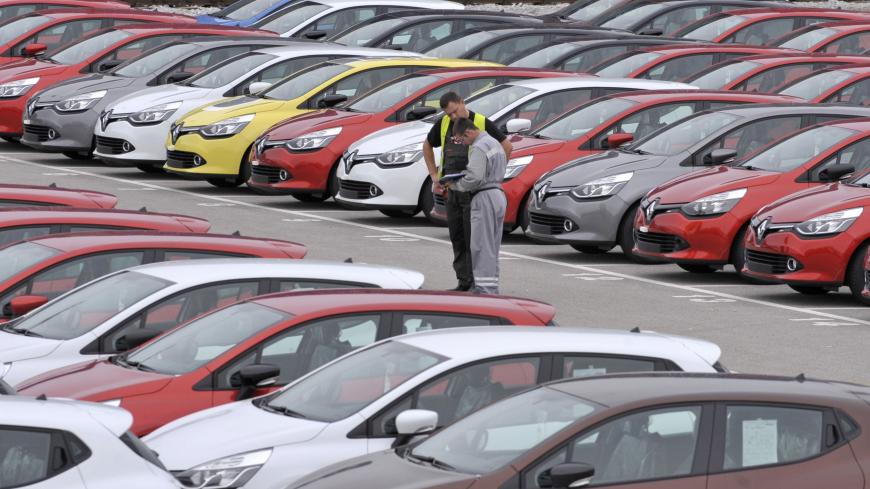 Renault cars produced in Turkey and awaiting export throughout Europe are checked by workers in the port of Koper, Oct. 14, 2013. Picture taken October 14. - REUTERS/Srdjan Zivulovic

Production in Turkey’s crisis-hit industrial sector — the backbone of the economy — is in general decline, with some major sub-branches hit even harder, auguring deeper economic turmoil and mass layoffs down the road.

Figures by the Turkish Statistical Institute and the Istanbul Industry Chamber point to sharp declines in the automotive, white appliances and electronics industries amid a fast-shrinking domestic demand and climbing prices under the impact of last year’s currency shock.

The turmoil in the construction sector, which was the first to plunge into crisis, has spilled over to suppliers in sub-sectors such as ceramics, cement, iron and steel, where sharp declines are similarly observed. And while the lira’s depreciation has given some impetus to exports, its impact on industrial production has been limited.

Various sectors are trying to stay afloat with tax reductions introduced by the government, but once such incentives come to an end after the March 31 local elections, these sectors are expected to face even harder times and possibly mass layoffs.

Recession became palpable in the Turkish economy in the second half of 2018. Soon, it devolved into a crisis, with the economic growth rate falling to 1.6% in the third quarter. The available data from the industrial sector is now the harbinger of sharp contraction in the fourth quarter.

Official figures on the gross domestic product (GDP) in the fourth quarter are scheduled to be released March 11, but a growing number of pundits forecast a contraction of about 5%. This would put the annual growth rate at some 2%, well below even the 3.8% the government projected as part of revised targets in September after the turbulence began. For Turkey, a growth rate of 2% means a steep slowdown, given that the country’s GDP grew 7.4% in 2017. Obviously, the economy will remain in crisis through 2019, with some forecasts suggesting a contraction of up to 4%.

The crisis is widely expected to flare up in April in the wake of the municipal elections. Scrambling to rein in popular anger ahead of the polls, Ankara has mobilized treasury funds and other public means to cushion the impact of the crisis and keep the dirt under the rug until April.

The crisis had hit the construction sector first, and now it has become palpable in the industry sector as well. Contraction in the industrial sector, which contributes 20-21% of the country’s GDP, has an immediate impact on trade and service sectors such as transport. Industrial output shrank nearly 6% year-on-year in the fourth quarter. This steep decline is the basis on which pundits predict a GDP contraction of some 5% in the fourth quarter.

A closer look at industrial output data shows that the decline in the manufacturing industry last year was worse than the overall decline, standing at more than 7%. Industries supplying materials to the construction sector, which had shrunk nearly 6% as early as in the third quarter, stand out as the worst hit. They include the ceramics, cement, glass and brick manufacturing industries, where production fell by more than 21%. In two other sectors linked to construction — woodworking and the base metal industry, which comprises the iron and steel sector — production shrank by 16% and more than 12% respectively.

Similarly, the automotive sector — another major sub-branch of the manufacturing industry — took blows from the sharp increase in foreign-exchange prices, which made imported inputs more expensive and pushed up producer and consumer prices. Amid the shrinking domestic demand, production in the sector decreased by more than 18%.

The decline stood at 13% in the metal industry, which comprises white appliances, and 12% in the computer manufacturing industry.

Others hit by the increased cost of imported inputs include the paper, plastics and rubber, and machinery and electric devices sectors, where productions shrank respectively by 12%, 11.5% and 11%. In the leather, chemicals, food and clothing industries, the annual drops in production ranged from 2.5% to 8%.

Oil refining, the pharmaceutical industry and furniture manufacturing stood out as sectors where the output did not shrink and even grew to some extent.

Another data set reflecting the industrial downturn is the Purchasing Managers’ Index (PMI) drawn up by the Istanbul Industry Chamber and IHS Markit, a London-based financial information company. The PMI is a composite index tracking the performance of the manufacturing industry, based on five individual indexes, including new orders, output, employment, suppliers’ delivery times and stock of items purchased. An index reading below 50 indicates an overall decline in the sector. In December, the PMI dropped to 44.2 from 44.7 in November, confirming that the industry has plunged into crisis.

The contraction in the economy could be observed also in sales data. Retail sales indices and turnover indices point to a steady downtick in sales, similar to the trend in production.

In sum, all those indicators signal that the Turkish economy shrank by an estimated 5-6% in the last quarter of 2018. In the industrial sector, sub-branches linked to construction have suffered major declines in production, along with the automotive and white appliances sectors that cater to domestic demand.

As a result, the government is widely expected to fall short of its annual growth target of 3.8% for 2018, with the rate likely to reach only about 2%. The economy is expected to continue shrinking through 2019, with contraction rate estimates ranging from 2% to 4%.

Since September, Ankara has in fact slowed the industrial decline through a number of tax cuts. With the elections in mind, tax incentives on the sales of cars, domestic appliances and furniture have been extended until March 31. In addition, many companies have slashed prices — a measure that helped to keep car sales unscathed but could not stop a 17% drop in white appliances sales. The sharp increase in foreign-exchange prices and the ensuing rise in interest rates on bank loans also bore on this outcome.

The steep declines in industrial output are expected to result in mass layoffs, especially after March. The number of employees was already down by 170,000 in the construction sector and 40,000 in the industrial sector in October, just several months after the turbulence began in the summer. The downtick in employment is estimated to have continued in the ensuing months, and with further job losses looming in 2019, the turmoil in the industrial and construction sectors — the two driving forces of the economy — is bound to aggravate the social cost of the crisis, which could hardly go without political consequences.