Turkey’s automotive sector, which holds a 1.5% share in global automotive production, is struggling on an uphill track, hit by domestic economic woes and unfavorable external factors. 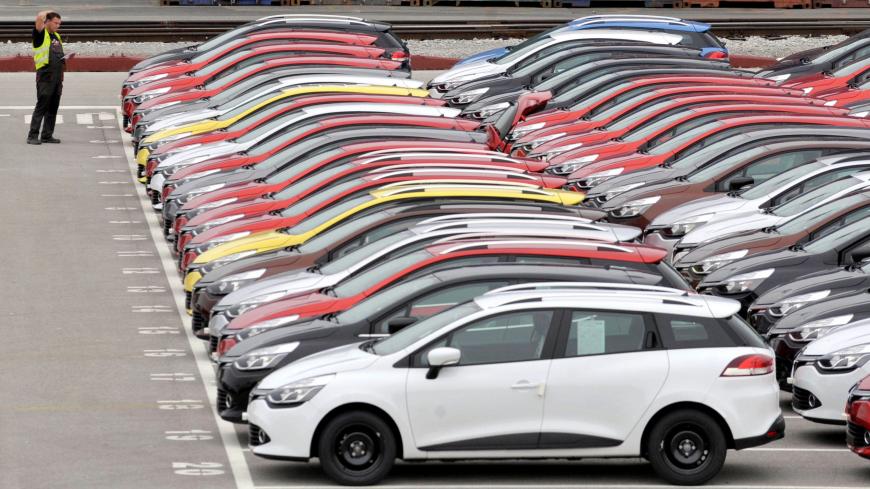 Renault cars produced in Turkey and awaiting export throughout Europe are checked by a worker in the port of Koper, Slovenia, Oct. 14, 2013. - REUTERS/Srdjan Zivulovic

The automotive industry has been a major leg in the economic growth model of Turkey’s ruling Justice and Development Party (AKP), which has relied heavily on foreign funds, while encouraging production focused on the domestic market and consumption. Now that this growth model is stumbling, the automotive sector has begun to struggle as well, with production on the decline, coupled with setbacks in foreign trade.

In 2018, Turkey was the world’s 14th largest producer of motor vehicles. Its output of 1.5 million vehicles, including roughly 1 million cars and 500,000 commercial vehicles, accounted for about 1.5% of the global production of 95 million vehicles. China was the leader with 30%, or 28 million motor vehicles, manufactured last year. The United States was second, yet with less than half of China’s production figure.

In 2012, Oyak Renault dominated automotive production in Turkey, boasting a 54% share. By 2017, it saw its share shrink to 32% as competitors such as Hyundai Assan, Toyota and Tofas stepped up their investments in the country. Toyota’s average share of 15% rose to 24% at the end of 2017 after the company launched a plant in the northwestern province of Sakarya to produce its popular CH-R model for the global market.

In terms of commercial vehicles, Koc Holding is Turkey’s dominant manufacturer. Its subsidiaries Ford Otosan and Tofas hold market shares of 57% and 35% respectively.

Seven global brands — Volkswagen, Renault, Ford, Fiat, Opel, Toyota and Hyundai — hold a combined share of 63% in Turkey’s automotive market. Volkswagen is the leader, with a 13% market share, followed by Renault with 12% and Ford and Fiat with just below 12% each.

The AKP has encouraged road transport and automotive industry growth through various infrastructure investments, production incentives and loans. As a result, the number of automobiles in use rose to 12.5 million in 2018 from 6 million in 2006, increasing by about 6% on average per year. However, the automotive industry's growth trend now appears to have stalled.

Despite government efforts to stabilize matters through tax interventions, the sector appears exhausted in terms of production and importation amid ups and downs since 2014. According to the most recent data, covering the first five months of the year, sales declined by 50% from the same period in 2018. Some 152,500 cars and light commercial vehicles were sold from January to May, down from about 302,300 in the same period last year. Reflecting the impact of the economic crisis gripping the country, sales of light commercial vehicles saw a sharper drop of 62.1%, totaling 5,890 vehicles.

The Automotive Distributors Association has revised its market forecast for the year-end to 400,000 sales at best, down from 450,000 sales in its original estimation. The sales of the automotive sector had totaled about 642,000 in 2018, including heavy commercial vehicles.

A similar downtick is observed in exports. According to figures from the Uludag Exporters Union in the northwestern city of Bursa, a major automotive hub, the sector’s exports stood at $11.7 billion in the first five months, falling 7% from the same period last year under the impact of shrinking demand in the European Union.

The weakest aspect of Turkey’s automotive industry stems from its unabating reliance on imports. Low foreign exchange rates until several years ago had increased the appeal of imported inputs, deepening the sector’s dependence on foreign sources. But once the Turkish lira tumbled and hard currency became more expensive, this resulted in sharp cost increases, leading to inevitable price hikes, curbing domestic demand.

In another important downside, local industries lag behind in the design of engine and powertrain technologies, relying again on foreign sources.

Last but not least, the domestic automotive market is saddled with hefty taxes. In addition to indirect taxes, comprising the special consumption and value-added taxes, the government collects a yearly motor vehicles tax from consumers. The value-added tax is fixed at 18%, while the special consumption tax varies from 45% to 160%, depending on engine volumes and pretax prices. The motor vehicles tax, meanwhile, is calculated on the basis of the vehicle’s age, emission rate and number of seats. Apart from the hefty tax burden, the frequent changes in tax regulations represent an additional drawback, creating uncertainty.