The limited scope of Turkey’s electric car project points to political motives by a government under strain rather than economic goals to help transition the automotive industry. 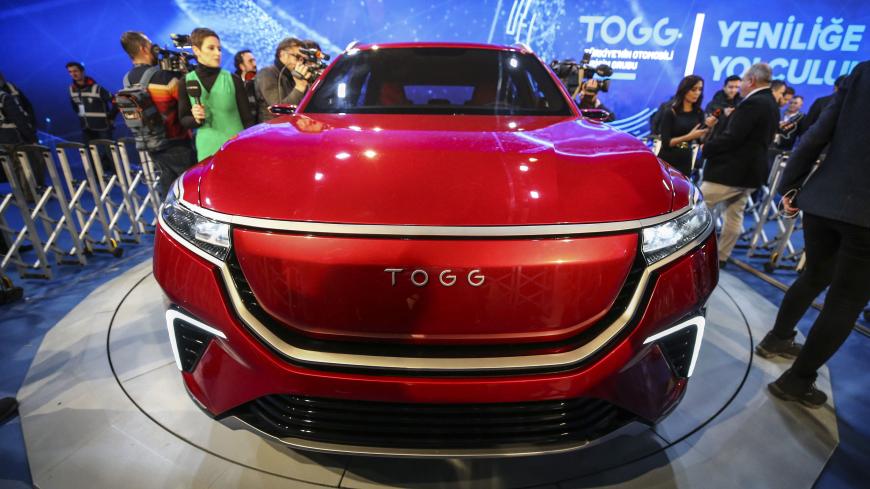 A much-hyped project for a Turkish-brand electric car has dominated Turkey’s agenda in recent days, along with a similarly sensational plan for an artificial waterway as an alternative to the Bosphorus. The viability of the car project remains dubious despite the global automotive trend toward electrification, with many convinced that the ruling Justice and Development Party (AKP), under growing strain since electoral losses last year, is merely seeking political gain.

Helped by its geographic advantage, Turkey in recent decades has grown into a production hub for automotive giants, among them Ford, Mercedes, Renault, Toyota, Hyundai and Fiat. Turkey's production capacity has reached about 1.3 million cars per year, up from 300,000 in the 1990s, in particular attracting production destined for the European Union. The automotive industry stands today as the country’s top exporter, accounting for 18% of all exports, having outstripped the textiles and apparel sector, Turkey's traditional leader. Its export revenues amount to roughly $30 billion per year, including the contributions from side industries.

Given this outlook, the AKP’s insistence on a Turkish-brand car appears driven by political and ideological motives rather than economic considerations. The project, which aims at producing only 175,000 electric cars per year, is widely seen as inefficient and even nonsensical in terms of boosting Turkey’s competitiveness on the global automotive market, securing technological gains and creating external economies. Critics believe it will boil down to a squandering of public funds for the sake of hype and grandstanding.

The AKP government has been struggling to contain major economic crises since the second half of 2018 amid growing concerns over the disenchantment of voters, who have been losing jobs and purchasing power in the turmoil. In last year’s local elections, the AKP suffered major losses, including in Istanbul, the country’s biggest city, and the capital Ankara. The debacle gave impetus to splinter movements led by former Premier Ahmet Davutoglu and Ali Babacan, the AKP’s former economy tsar. Foreign military ventures, in Syria and most recently in Libya, have also failed to produce the tailwind in domestic politics that Ankara had hoped for. Thus the government has come to pin its hopes on big projects to resolve its problem of voter consolidation. This appears to be the main purpose of the indigenous car project as well.

The domestic car has been imagined as a symbol of the “new Turkey” that the AKP projects itself as building, driven by neo-Ottoman ambitions. President Recep Tayyip Erdogan had floated the idea in 2011 when he was prime minister. At a gathering of TUSIAD, Turkey’s leading business association, Erdogan challenged entrepreneurs, prodding them, “Isn’t there a brave fellow in this country to make a 100% indigenous car?” The idea popped up time and again over the ensuing years. Finally, in November 2017, Erdogan announced the creation of Turkey’s Automobile Joint Venture Group (TOGG), an enterprise to realize the project and consisting of major companies, including the Anadolu Group, BMC, Kiraca Holding, Turkcell and Zorlu Holding. The semi-official Union of Chambers and Commodity Exchanges of Turkey also joined the group with a 5% stake.

Though the project seemed to sink into oblivion at times, it returned to the spotlight at the end of last year. It turned out, however, that the “indigenous” car had been designed by the Italian company Pininfarina and previously showcased at an exposition in Beijing, where it apparently did not make much of an impression.

According to project data presented at a Dec. 27 unveiling ceremony attended by Erdogan, TOGG will invest 22 billion Turkish liras ($3.7 billion) to build an electric car plant in the northwestern province of Bursa, a major automotive hub, that will become operational in 2022. The government would offer the consortium an array of project-based incentives, including exemption from custom duties and value added tax in addition to other tax reductions, 10 years of support to meet employees’ social security payments and land. It would also offer to guarantee the purchase of 30,000 cars for the public sector by 2035.

Electrification has emerged as a major global trend in the automotive industry in recent years, driven by environmental concerns to reduce carbon dioxide emissions, about 16% of which derives from road transport. To achieve the goals set by the 2016 Paris climate accord, the number of electric cars will need to reach 600 million by 2040. The global electric car park has more than 2 million vehicles at present. The International Energy Agency estimates that figure will reach 56 million by 2030.

China has emerged as the leading electric car maker, manufacturing more than 30,000 vehicles per year, or 30% of global production. It is also the world’s largest market for electric cars, with sales exceeding 350,000 in 2016. Starting in 2019, Beijing obliged carmakers in the country to allocate at least 10% of their output to electric cars. Obviously, this will drive major global manufacturers to pursue more aggressive strategies in the electric car industry.

In Europe, Turkey’s main export market, many countries have set targets to ban the sale of all petrol and diesel cars under deadlines ranging from 2025 to 2040. They have also imposed tight emission controls and restrictions on access to city centers for such vehicles, while introducing new tax and fee policies for electric cars.

Some 70% of Turkey’s petrol and diesel car production capacity goes toward exports. Turkish consumers prefer imported vehicles, which account for up to 70% of domestic demand. To preserve its standing in the global chain in the future, Turkey has to preserve its existing export markets, secure a share of the domestic market and get ready for and accomplish the shift to electric car production, including adjustments to the side industries that complement the sector.

All told, what the automotive industry needs is an all-encompassing incentive policy to help companies adapt to the global trend and speed the transition as part of a well-planned and efficient new vision for the sector. What Ankara has been promoting, however, is a showcase project that has a production target of only 175,000 cars per year, is aimed at the domestic market and will enjoy government incentives unavailable to others in the sector. In other words, any objective, coolheaded observer could easily discern that the government is not trying to address the needs of the industry, but is instead seeking to excite and impress voters.