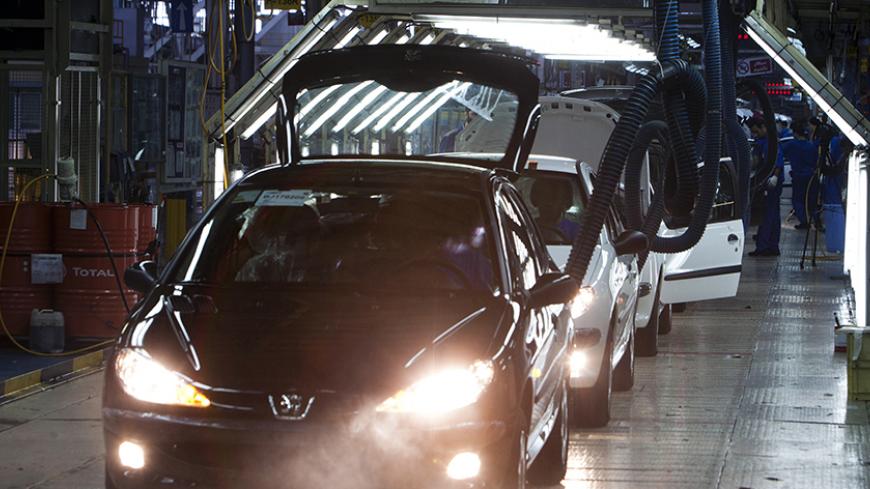 TEHRAN, Iran — In his first trip abroad following the Jan. 16 implementation day of the Joint Comprehensive Plan of Action, Iran’s President Hassan Rouhani toured Italy and France, where he signed major deals with Airbus SAS as well as PSA Peugeot Citroen and Renault SA. The Airbus deal, which has yet to be finalized, will create a new market for the European passenger jet consortium as Tehran is moving to procure 118 aircraft. The Airbus deal will help Iran renew its aging air fleet, as the decades-long embargo on its aviation industry has officially come to an end. The auto agreements are aimed at reviving Iran’s embattled vehicle manufacturers. Indeed, the resumption of Iran’s partnership with the French automakers is geared toward stimulating domestic demand and improving employment prospects within Iran in the short and medium term.

Of note, the auto industry is the biggest economic sector in Iran, after oil and gas, accounting for 10% of gross domestic product. It has been in decline in recent years after being hit with a double whammy of sanctions and currency depreciation, both of which drove up prices for imported parts. A 2015 World Bank report shows that the annual production of cars in Iran sharply declined to 700,000 in 2012, down from 1.6 million prior to the intensification of sanctions. The collapse of vehicle production led to layoffs in the sector, which accounts for 4% of the workforce, according to the report. The World Bank has forecast that car production will climb to around pre-sanction levels “within the next two years” if industry officials manage to persuade global manufacturers to immediately resume operations in Iran. The Rouhani administration appears to have taken note of the latter point, as it is moving to reconnect with French partners to aid economic growth.

Indeed, boosting the automotive sector could simultaneously address several problems. Masoud Nili, top economic advisor to the president, believes that sustainable demand is a prerequisite for sustainable growth, thereby urging economic authorities to consider reviving the auto industry as a prompt solution to Iran’s economic woes. In a speech at a management conference in Tehran late last year, Nili called on the government to start investing in technology that addresses the high consumption of energy in the country — an undertaking that is attractive for international investors and would eventually help cut air pollution, given that vehicles are blamed for 80% of the pollution in Tehran and other major Iranian cities. Nili’s remarks, which were published in a recent issue of the leading Iranian economic magazine, Tejarat-e Farda, opened a door for the administration to hit several birds with one stone as Iran enters the post-sanctions era.

The new technology, if obtained within a reasonable timespan, can be used in new cars, enabling the government to address air pollution concerns while creating thousands of jobs. To this end, the government first needs to further slash energy and fuel subsidies, Nili insists, adding that the second step is to forge a partnership with a global auto manufacturing group that can boost production and replace the large number of aging and nonstandard vehicles on Iranian roads.

However, the idea of replacing old cars seems to be misunderstood by some officials. On Jan. 23, Management and Planning Organization chief Mohammad Bagher Nobakht unveiled a plan to replace 90,000 aging taxis across the country in the coming Iranian fiscal year (beginning March 20) with new Samand and Peugeot 405 cars — two outdated products of Iran Khodro, the biggest domestic carmaker. Although the plan is defensible at first glance, it appears to completely ignore the vehicles’ high fuel consumption.

Hamid Azarmand, an economic researcher and former deputy head of the Iranian Productivity Organization, said in a recent interview with Tejarat-e Farda that the selection of Samand and Peugeot 405 vehicles, with their “outdated technology,” shows that policymakers seek to protect domestic carmakers rather than optimize fuel consumption or address air pollution. Azarmand argues that a competitive market could offer more advantages, while he also encourages lower duties on car imports and a stronger presence of global car manufacturers in the country as measures that will result in the domestic production of high-quality cars that consume less fuel.

The administration is well-informed and aware of these discussions. Indeed, it noted in its discussions with PSA Peugeot Citroen and Renault SA that the French carmakers will have to transfer technology to their Iranian partners if they want a fair share of the Iranian market. However, many in Tehran are still doubtful that Peugeot and Renault will become reliable partners. The conservative newspaper Vatan-e Emrooz has called the two French automakers “betrayers” who turned their backs on Iran when sanctions intensified. Another conservative media outlet, Raja News, questioned the technology transfer process in the Peugeot contract, saying the process will be complete in 13 years, when the produced models will be too outdated to be exported to regional countries.

Of note, Peugeot has agreed to invest $439 million in Iran Khodro over five years to upgrade a factory near Tehran. The site will produce 100,000 Peugeot 208, 301 and 2008 vehicles a year starting in late 2017. Reports say output will eventually be doubled. The deal with Renault has not yet been finalized, but it will probably follow the same pattern.

Despite the criticism, administration officials have focused on development of Iran’s auto industry as a central strategy to achieve economic growth and boost employment. They hope that future joint ventures with other carmakers from Italy, Japan, Germany and Austria will develop the industry and create more jobs compared to other sectors, if given the same chance. Some reports even claim that a partnership with European carmakers representing US manufacturers such as General Motors — an old partner of Iran that left the country a few years after the 1979 Islamic Revolution — is already under consideration. Indeed, Germany’s Opel AG and Italy’s Fiat SPA are currently representing General Motors and Chrysler, respectively. This is perhaps why Rouhani’s team began negotiating on likely cooperation with Fiat executives during their recent visit to Italy. Nonetheless, even if US carmakers won’t be represented in Iran, the administration’s approach is geared toward developing ties with the West, especially when it comes to technology. Hence, as there will be more Iranian visits to Europe in the coming months, it can be anticipated that economic cooperation will continue to be focused on reviving Iran’s automotive industry.