Iranian hard-liners are targeting automotive sector policies in their latest attack on the administration of President Hassan Rouhani. 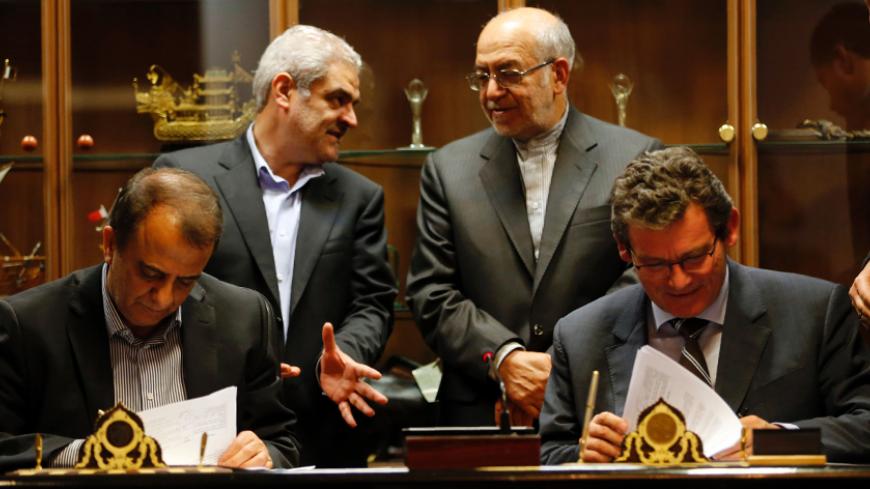 TEHRAN, Iran — Iranian hard-liners have launched a new attack on the administration of President Hassan Rouhani, this time focusing on the country’s automotive industry. At an Oct. 25 parliamentary hearing, the Industries and Mines Committee grilled Industry, Mines and Trade Minister Mohammad Reza Nematzadeh over a deal he made last month with the French automaker Renault. Nematzadeh also came under fire over a controversial decision that critics say led to the import of 400 BMW, Toyota, Volvo and Honda vehicles manufactured in the United States, in contravention of guidelines barring the import of American-made cars.

Citing member of parliament Mohsen Kouhkan, the Young Journalists Club — an affiliate of conservative-controlled Islamic Republic of Iran Broadcasting — reported that the responses by Nematzadeh and the CEOs of two leading carmakers, Iran Khodro Company (IKCO) and SAIPA — who appeared with Nematzadeh — will now be reviewed by the parliament’s presiding board.

On Oct. 26, the Student News Network (SNN) published a report criticizing the import of US-made cars but did not refer to the hearing. Citing a number of pundits, SNN argued that the import had been unwise, because Washington’s “hostile” policies have for decades been damaging for Iranian consumers. “Cars that are made in the US, irrespective of whether their brand origin is American, European or Asian, create value added for American companies and boost employment in the US. We should not use Iranian money to create jobs for Americans,” Hassan Karimi Sanjari, an automotive expert, said in an interview with SNN.

Neither media outlets nor parliament members revealed what Nematzadeh had said in response to the concerns raised about the import of the US-made cars. A day before the hearing, Donya-e Eqtesad, Iran's leading economic daily, had reported that authorities had banned the import of European cars produced in the United States. The Industry, Mines and Trade Ministry, however, has not yet officially announced such a ban.

Another concern among parliament members was the direct involvement of Nematzadeh's ministry in the car market. The Industrial Development and Renovation Organization (IDRO), under the ministry's purview, had struck a deal with Renault on Oct. 9. On the sidelines of the signing ceremony, Nematzadeh tried to justify the deal, saying that his ministry seeks to attract foreign investment in the automotive sector to upgrade manufacturing technology and provide Iranians with high-quality cars at competitive prices. He called Renault an “appropriate partner” that could can help Iran finish a key automotive development project given the company’s 12-year presence in Iran.

Some parliament members appear not to have been persuaded, however, as they argued that the private sector, not IDRO, should have partnered with Renault. Parliamentary committee spokesman Saeed Bastani told the Fars News Agency on Oct. 26 that in response to this assertion, Nematzadeh had apparently said that private manufacturers had refused to cooperate with the French company. Members of parliament called on Nematzadeh to obtain a guarantee from French automakers, including Renault, Peugeot and Citroen, that they will not repeat their “wrong behavior” of the past, Bastani said, referring to how Renault and Peugeot had pulled out of Iran in 2012 when economic sanctions intensified.

A German business consultant who counsels a number of European and Asian carmakers operating in Iran told Al-Monitor that such guarantees are difficult to come by. “It doesn’t matter what type of contract you sign with a foreign company. If Iran comes under the same serious sanctions as before in the future, none of the European automakers will stay in the market,” the consultant said on condition of anonymity during a business trip to Tehran. “Stability is super important,” he stressed, while criticizing how numerous actors have a finger in Iranian market policy although such decisions need to be made by the Rouhani administration alone.

Of note, in the last few months IKCO and SAIPA have resumed cooperating with Peugeot and Citroen. That three major partners in Iran’s automotive industry are French has raised concerns among some lawmakers about the future of the industry in the event of renewed external pressure. In an attempt to minimize the negative consequences of “bad contracts,” some parliament members have become involved in agreements with foreign investors in ways that pro-administration pundits say is excessive. Farbod Zaveh, a car market expert, told Donya-e Eqtesad on Oct. 22, however, “In the case of the Iranian side of the contract being a state-run body, which is the case now, the parliament absolutely has the right to directly get involved in the matter.” According to Zaveh, the lawmakers have a legal right to oversee all foreign contracts.

Under the IDRO-Renault contract, Renault is committed to producing 75,000 cars at Bon Roo, the manufacturing site previously owned by SAIPA before IDRO seized it as part of a debt settlement. The French company is also committed to investing in the site to double annual production in the next phase and eventually achieve an output of 300,000 vehicles a year in five years.

Although Nematzadeh faced a tough grilling at the parliamentary hearing, no questions were apparently raised about the excessive government-imposed costs on domestic manufacturers that has made their car prices highly uncompetitive. In the fiscal year ending March 19, 2016, 31.5% of the consumer price of domestically produced cars went straight into the government’s coffer in the form of a variety of taxes, according to Donya-e Eqtesad, citing a survey conducted by an unidentified domestic carmaker. Domestic automakers also complain that under current regulations, manufacturing vehicles whose technology is not yet fully localized is not economical, pointing out that producing such low-quality cars as the Tiba, Samand and outdated Peugeot 405 and Pride models makes much more sense than manufacturing the more advanced Logan (Tondar 90), which requires foreign parts.