Ethiopian representatives did not attend the recent round of US-mediated talks on the Grand Ethiopian Renaissance Dam -- talks that were supposed to wrap up with a signed final agreement among Cairo, Addis Ababa and Khartoum. 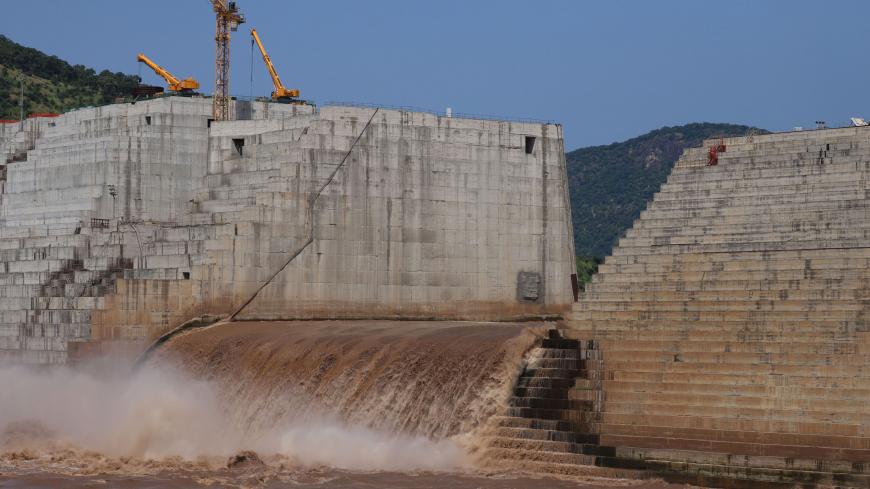 CAIRO — Ethiopia did not attend the Feb. 27–28 round of US-mediated talks in Washington intended to produce a final agreement with Egypt and Sudan on the controversial, $4.8 billion Grand Ethiopian Renaissance Dam (GERD).

In the Ethiopian capital of Addis Ababa, officials said they needed more time to consider their position on the agreement, which was the product of meetings attended by the foreign ministers of Egypt and Sudan and by US Treasury Secretary Steven Mnuchin.

“Consistent with the ... [2015 Declaration of Principles], and in particular the principles of not causing significant harm to downstream countries, final testing and filling should not take place without an agreement," the Treasury Department said in a Feb. 28 statement. "We also note the concern of downstream populations in Sudan and Egypt due to unfinished work on the safe operation of the GERD, and the need to implement all necessary dam safety measures in accordance with international standards before filling begins.”

The Ethiopian Ministry of Water, Irrigation and Energy had announced Feb. 26 on Twitter that it had informed the US Treasury that it would not be able to participate in tripartite discussions until it concluded talks with local authorities about the agreement.

After the meeting, Cairo said, “Egyptian state institutions will assume their national responsibility to defend the interests, capabilities and future of the Egyptian people by all available means.”

Ethiopia replied to the Feb. 28 US statement with a statement published Feb. 29 by the Ethiopian Foreign Ministry. The statement said the Foreign Ministry and Water Ministry were disappointed by the US statement and will fill the dam despite American recommendations to the contrary. The Ethiopian statement said, "Ethiopia as the owner of the GERD will commence first filling of the GERD in parallel with the construction of the Dam in accordance with the principles of equitable and reasonable utilization."

Egypt, in a March 1 statement issued by its Foreign Ministry and Water Resources Ministry, said Ethiopia's absence from the Washington meeting was hampering the course of negotiations. The statement also said that Ethiopia's latest remarks "included many fallacies, distortion of facts and even clear disclaimer of Ethiopia's obligations under the rules of international law, in particular the provisions of the 2015 Declaration of Principles agreement."

Egyptian Foreign Minister Sameh Shoukry, in a phone call with the TV show “Al-Kahera al-Aan” (Cairo Now) on March 1, said, "Ethiopia cannot, under any circumstances, start filling the GERD until an agreement is reached with Egypt and Sudan."

Washington in November began sponsoring talks to finalize a comprehensive agreement based on a road map all parties had approved.

“Egypt’s main objective is to commit Ethiopia not to initiate any procedures related to the filling and final testing until it signs the agreement,” an Egyptian government official who attended the talks told Al-Monitor.

“Cairo has been calling for this throughout the negotiations, which have been ongoing with the Ethiopian side since 2012. Addis Ababa, however, failed to commit to this condition, considering the filling of the dam a matter of national sovereignty, since the dam is built on Ethiopian land. This is inconsistent with international laws for riparian states and common rivers,” the source said on condition of anonymity.

"The final version of the agreement that we concluded under the auspices of Washington and the World Bank fulfilled all the Ethiopian demands. The Ethiopian delegation had no justified argument to try to amend or change the agreement’s items," the source said. “Cairo is intent on signing, after agreeing on some amendments formulated by the US in consultation with the World Bank.”

Some opponents in Ethiopia say the agreement favors Egypt. But the source said, “The US acts as a neutral party that has been present in all talks and negotiations [since November] between the technical, legal and political delegations of Egypt, Sudan and Ethiopia. No party’s interests are being advanced at the expense of the others. ... Should Ethiopians have any objections, they should go back to the negotiating table. Egypt is satisfied with the draft agreement, but we still have some concerns about Ethiopia’s commitment to the deal in such a way as not to affect Egypt’s share of the Nile water."

A technical official with the Egyptian delegation, who also spoke with Al-Monitor on condition of anonymity, said, “I don't believe that the technical issues would be raised in any future talks with Addis Ababa. After long negotiations, we have reached an understanding of the technical issues. It all boils down to politics now.”

The agreement covers filling the reservoir and operating the dam. The reservoir would be filled in stages using specific procedures to deal with droughts, prolonged droughts and years of water scarcity during the lengthy filling process, which is expected to take anywhere from five to 15 years. Cairo prefers an even longer filling period, to minimize reduction of water flowing downstream.

The agreement also addresses coordination between Egypt, Sudan and Ethiopia and binding procedures to resolve any disputes.

Ethiopia is set to start filling the reservoir at the beginning of July. This means turbines would begin operating at the end of 2020 to generate energy. Addis Ababa expects the dam to produce 6,000 megawatts of electricity.

Rawia Tawfiq, a political science professor at Cairo University, told Al-Monitor, “It was not very surprising to see Ethiopia pull out of the negotiations, as Ethiopian opponents believe that the US-mediated deal favors Egypt. Also, Egypt requested the US mediation at the beginning of the negotiations, while Ethiopia wanted an African mediator.”

He added, “According to [the Declaration of Principles], which Ethiopia signed in March 2015, final testing and filling should not take place until the agreement is signed."

Ahmad al-Mufti, an expert in Sudanese international law and water resources, told Al-Monitor, “Ethiopia’s absence at the recent talks signals its unwillingness to sign the agreement, as it believes that filling and operating the GERD is a matter of national sovereignty, since it is built on Ethiopian territories.”

He continued, “Should Ethiopia refuse to stop the procedures of filling the dam until the signing of the agreement, Egypt and Sudan will have no other option but to refer to the UN Security Council, on the grounds that such a move would threaten security and peace and create anger at home in Sudan and Egypt."

Meanwhile in Ethiopia, opponents and politicians in and outside the government launched campaigns on social media, with the trending hashtag #itsmydam, against the results of the last round of talks and the US Treasury statement about suspending the filling until an agreement is reached.

Some Ethiopian activists have even gone so far as to warn of the country's ferocity in defending its interests by evoking the Battle of Adwa of 1869, when Ethiopian forces defeated an invading Italian force trying to expand Italy’s colonial empire in the Horn of Africa.