The Islamic State claimed responsibility for an attack against a pipeline in North Sinai that carries gas from Israel to Egypt. 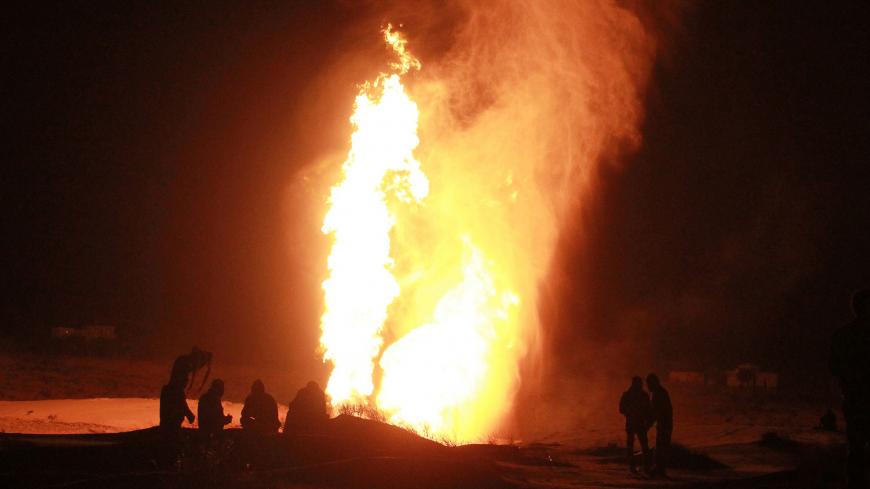 A fire burns on a gas pipeline in the Massaeed area west of the Mediterranean coastal town of al-Arish, North Sinai, Feb. 5, 2012. - REUTERS

A huge blast rocked the gas pipeline between Egypt and Israel on the morning of Feb. 2 in the Sinai Peninsula, alarming residents there and causing a massive fire at the explosion location. The pipeline was completely out of order and an alternative pipeline is currently being used until the damage is fixed.

The Islamic State claimed in a statement that it had planted bombs in various locations along the pipeline.

Since the January 25 Revolution of 2011, there have been around 30 reported blasts targeting the same pipeline until the Egyptian army sent military reinforcements to Sinai to ensure security on pipeline tracks in 2015.

Osama el-Ghandour, head of the North Sinai governorate, downplayed the impact of the blast on gas supplies in the province. He told Al-Monitor over the phone that while the damage is still being assessed, it “will not affect houses, factories and companies operating in North Sinai because they shifted to an alternative pipeline until repairs are done.”

When asked about the blast's affects on gas supplies to and from Israel, Ghandour said only, “We are trying to control the situation as much as possible.”

Several residents of North Sinai told Al-Monitor on condition of anonymity that security forces are being deployed in cities and villages in the area. According to the residents, the army is conducting raids in North Sinai to catch the culprits and other militants affiliated with al-Qaeda.

In mid-January, the Egyptian Ministry of Petroleum announced the beginning of operations in a $19.5 billion deal under which Israeli companies will export gas to Egypt from the Israeli Leviathan and Tamar fields.

The ministry said in a Jan. 15 statement that pumping gas from Israel to Egypt “marks a major milestone serving the economic interests of the two countries, as it allows Israel to transport quantities of natural gas to Europe through Egyptian liquefied natural gas plants, in the framework of Egypt’s growing role as a regional gas hub.”

Mahmoud Bayoumi, a researcher of Islamist groups in Istanbul Aydin University, said he expects “more operations of the kind.” He told Al-Monitor, “Armed groups in Sinai are bombing gas pipelines once again as a possible reaction to the Egyptian government’s decision to import gas from Israel or due to the army clampdown on militants in Sinai, which forced them to change their attacks.”

He added, “IS’ dwindling control in Syria and the military advances of Gen. Khalifa Hifter’s forces in Libya in addition to the Egyptian army’s tightened grip on the Sinai Peninsula are pushing armed organizations in Sinai toward ramping up operations to prove they're still around and able to strike.”