Egypt-Turkey tensions continue to rise in wake of newsroom raid

In a move that risks further threatening the already strained relations between Cairo and Ankara, Egyptian security forces raided the news office of the Turkish Anadolu Agency in Cairo and arrested several workers there, accusing them of being affiliated with the Muslim Brotherhood. 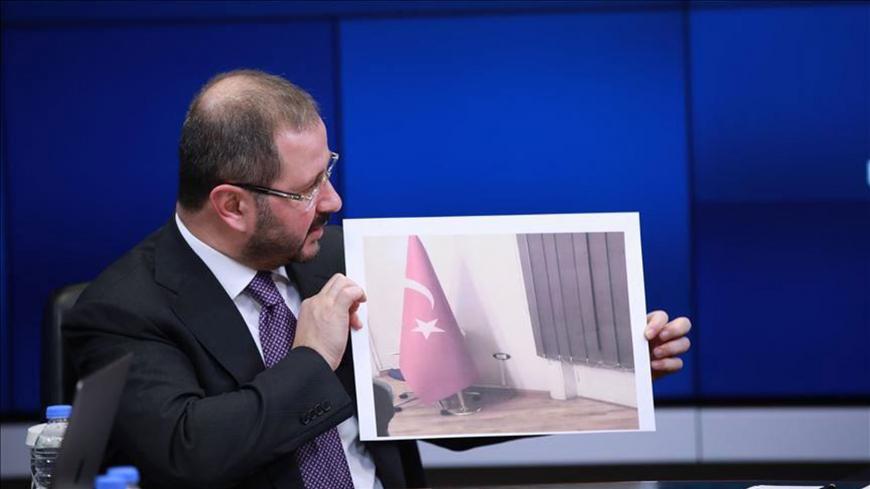 Tensions between Egypt and Turkey have escalated with dueling statements coming from both sides after Egyptian security officials arrested four employees of Turkey’s official news agency earlier this month in Cairo.

Egyptian security forces stormed the office of the Turkish Anadolu Agency Jan. 14 and arrested four employees, including a Turkish national, then referred them to state security prosecution on the grounds of terrorism accusations.

According to a statement issued Jan. 16 by the Egyptian Commission for Rights and Freedoms, a rights organization operating in Egypt since 2014, security forces detained journalists and employees at the agency for more than seven hours. Security forces then referred them to the state security prosecution for investigation, which accused four staff members at the agency, including a Turkish citizen, of aiding a terrorist group to achieve its goals, spreading false news and funding terrorism.

While the journalists have now been released, the Egyptian government has apparently not dropped charges and seems intent to see the case through.

Fatima Sarraj, a defense attorney for the Anadolu Agency staff, said the state security prosecution issued a decision to release the journalists after long hours of questioning them, with bail set at 10,000 Egyptian pounds (about $633) pending further proceedings.

Fatima told Al-Monitor the decision to release them “does not mean the charges have been dropped. The case is ongoing, and the accusations still stand. However, incarceration is not necessary at the moment. The staff members are also banned from traveling until the case is settled.”

Police released the Turkish citizen shortly after his arrest. But for more than three days since the decision to release all of them was issued, the Egyptian journalists were nowhere to be seen and did not communicate with their lawyers or families before they were released.

The accused journalists included Hussein al-Kabbani, brother of current detainee Hassan al-Kabbani who is being held on terrorism charges and who was the editor-in-chief of Ikhwan Online, the official website of the Muslim Brotherhood in Egypt.

In an official statement released Jan. 15, the Egyptian Ministry of Interior claimed the agency “is involved in a Muslim Brotherhood plot funded and supported by Turkey against Egypt.”

The statement added, “The cell is planning to prepare negative reports including false and fabricated information on the economic, security, political and rights situation in Egypt, and to send them to the agency’s premises in Turkey to tarnish the image of the country at home and abroad.”

The Turkish presidency condemned the raid on the agency, considering it “a clear violation of the law.”

Ibrahim Gulen, official spokesperson for the Turkish presidency, tweeted Jan. 15 that “the Egyptian authorities’ raid of Anadolu Agency’s offices in Cairo and their unjustified arrest of employees constitute a clear violation of the law and of human rights. We strongly condemn this act.”

Hafez told Al-Monitor over the phone, “All the security measures that were taken against Anadolu Agency are legal, and Turkey’s allegations are not true.”

He added, “The security investigations show the headquarters that were raided are being used by a media cell affiliated with the Muslim Brotherhood to prepare false reports about Egypt and ruin its foreign reputation. Therefore, a country’s preservation of its national security and reputation is not a breach.”

A security source revealed to Al-Monitor on condition of anonymity that “security forces received lists of the names of all journalists, photographers and administrative staff collaborating with Anadolu Agency after raiding its premises. The names are currently being checked to verify that they are not implicated in any acts targeting Egypt’s national security and reputation.”

For years, relations between Egypt and Turkey have been tense because of Ankara’s support for the Muslim Brotherhood and its objection to President Abdel Fattah al-Sisi’s regime.

Mahmoud Bayoumi, a political researcher at the Istanbul Aydin University who lives in Turkey, said the raid constitutes “dangerous Egyptian escalation against the Turkish administration.”

He added, “The Egyptian authorities’ decision to arrest employees in the agency seems like a declaration from Cairo of refusing any reconciliation with Turkey and proceeding with the escalation, after Yasin Aktay, chief adviser to the Turkish president, had called on Egypt to negotiate to solve the crises between them.”

On Jan. 13, Aktay called on the Egyptian government to negotiate to solve the crises and stated that cooperation with Egypt is “inescapable.”

Bayoumi noted, “Egyptian-Turkish relations will worsen after this raid, and Turkey might respond.”

Egyptian security forces have raided news agencies’ premises and detained staff on several occasions. On Nov. 24, security officers stormed the pro-opposition Mada Masr website headquarters, detained the staff for hours and confiscated their mobile phones for more than four hours. They then arrested three journalists, including the editor-in-chief, and referred them to the police, who released them immediately with no charges.