Is Turkey going to crack down Muslim Brotherhood aligned TV in gesture to Egypt? 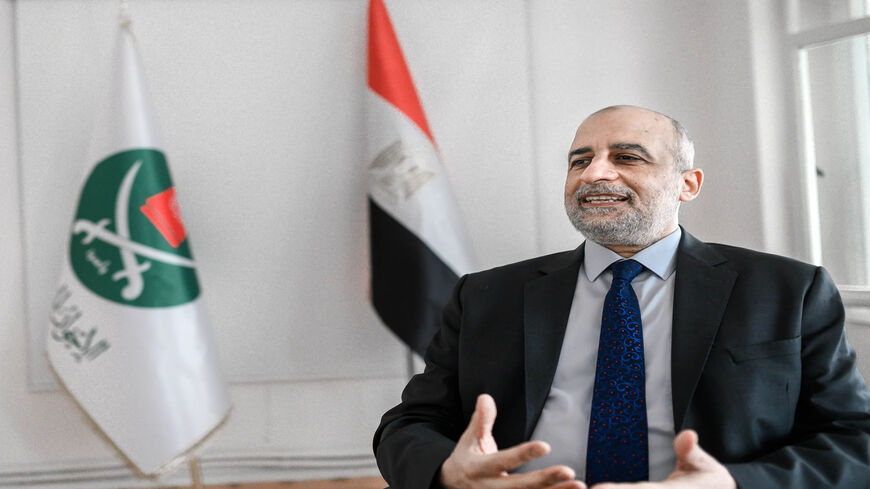 CAIRO — Reports March 19 suggested that the Turkish authorities are requesting the Muslim Brotherhood-affiliated channels based in Istanbul to tone down their rhetoric against Egyptian President Abdel Fattah al-Sisi. These reports raised concerns as to how the Turkish authorities would deal with the organization’s members on its territories, should a reconciliation be achieved between Turkey and the Egyptian government.

Al-Monitor contacted several employees at the Egyptian TV channels based in Turkey — including Mekameleen, El-Sharq and Watan — which are known to have a large number of media figures and professionals who are opposed to the Egyptian government and have been persecuted in Egypt for years for political issues. However, they left for Istanbul following the ouster in 2013 of former Egyptian President Mohammed Morsi, who was affiliated with the Muslim Brotherhood.

A source at El-Sharq TV, who preferred not to be named since he is not allowed to make media statements, told Al-Monitor, “Until noon on March 19, we have been preparing for programs with the same editorial policy and same issues we had been working on. There was no problem at all — until 6 p.m. that day.”

The Egyptian journalist said he was surprised when the channel's director requested a meeting for all employees and senior anchors. The director, he said, claimed a "high-level Turkish party" requested that the day's episode be canceled and that the channel stop targeting and criticizing the government in Cairo and Sisi himself.

The source added, “And this was indeed what happened. We announced the postponement of the programs that were scheduled for that day, including the show of Egyptian actor-turned-TV presenter Hisham Abdullah, whose program was canceled just 40 minutes before going live."

This move comes a few days after the statements of Egyptian Foreign Minister Sameh Shoukry in parliament regarding Egyptian-Turkish relations. Shoukry told the parliamentary Foreign Affairs Committee, “Talk alone is not enough to prove Turkey’s intention to restore ties between the two countries.”

Turkish officials had revealed in mid-March ongoing diplomatic and political contacts between Ankara and Cairo. In statements carried by the official Turkish Anadolu News Agency, President Recep Tayyib Erdogan stressed the importance of relations between the Egyptian and Turkish peoples, hinting at the resumption of relations between the two countries after years of hiatus.

Since the removal of Morsi in June 2013 and the escape of the Muslim Brotherhood and the opposition leaders to Turkey — and other countries such as Qatar and England — for fear of reprisal at home, the organization established three TV channels in Istanbul to replace the Egyptian media platforms that had been heavily censored in the past.

On March 18, Al-Arabiya TV reported that when the Turkish authorities demanded to stop the targeting of the Egyptian government in the media, they also decided to place several Muslim Brotherhood leaders in Turkey under house arrest — something that was categorically denied by a high-level Brotherhood official who said, “This is completely unfounded.”

He noted, “The Turkish authorities only asked us to commit to the media standards and not to insult figures in the Egyptian regime. We support the need to adhere to morals and media standards in general.”

He denied that authorities in Ankara had asked "in any way" that the Brotherhood channels be closed or the group's leaders expelled. "They only asked us to reduce the number of political programs and broadcast more diverse social programs. [The Turkish authorities] said their request was because of a current understanding between the two Egyptian and Turkish sides, and we completely understand this,” he added.

Murad Ghorab, a Brotherhood leader who fled to Turkey in 2014, told Al-Monitor, “The talk about placing Brotherhood leaders in Turkey under house arrest is not true, as all leaderships continue to communicate and work with no restrictions whatsoever.”

He said, “The Turkish authorities just gave us remarks on our work at the Brotherhood-affiliated TV channels, nothing more. There were no threats to close the channels or dismiss any staff or even suspend the programs. The channels were just requested to review their editorial policies and programs. Muslim Brotherhood leaderships continue to meet in a bid to calm their members and the pro-opposition members who fled Egypt and to address their fear of being extradited to Egypt or deported to other countries."

Ghorab accused the Egyptian government of trying to “blow this issue out of proportion and to raise fears among the Muslim Brotherhood in Turkey. We are now trying to control and calm the situation.”

In a phone interview with Al Jazeera March 19, Yasin Aktay, an adviser to Erdogan said, “The Turkish authorities did not order the closure of the Muslim Brotherhood-affiliated TV channels in Ankara. The issue of repatriation of opposition figures was not raised in the first place.”

Moreover, Aktay said, “News about repatriating [Egyptian] opponents is fabricated. Turkey [refuses] to extradite any person to Egypt or any other country that carries out the death penalty.”