Amid heightened tensions between Cairo and Ankara, culture is emerging as the new battlefront as each party offers its own version of the Ottoman era. 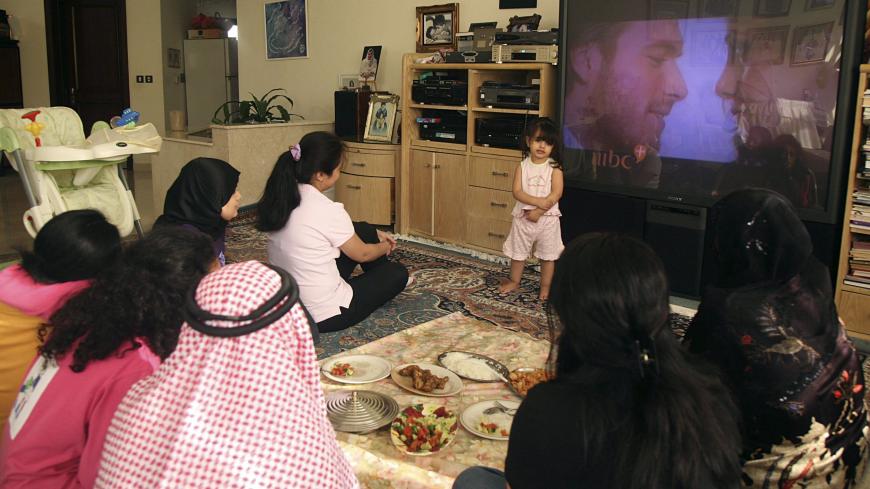 Turkish TV dramas have been banned from Egypt's pro-government TV channels since 2013 and also have been taken off Saudi channels. Here, a family watches the Turkish soap opera "Noor" in Jeddah, Saudi Arabia, July 26, 2008. - REUTERS/Susan Baaghil

Dar al-Ifta, the Egyptian authority responsible for issuing religious edicts, is warning Egyptians against watching Turkish TV drama series, which have been banned from Egypt's pro-government television channels since 2013. The warning, which comes at a time of strained relations between Egypt and Turkey, has raised eyebrows on social media; activists are baffled as to why the cautionary advice had come from a religious rather than a political institution.

"Dar al-Ifta is a state institution and protection of national security is one of its primary tasks,” Kamal Amer, head of parliament's Security Committee, told Al-Monitor.

"The Turkish television series are distorting historical facts and spreading misinformation. Turkey is clearly biased in favor of the outlawed Muslim Brotherhood and is protecting its own interests. Our institutions, religious or otherwise, must look out for our best interests," he said.

In a statement published on its Global Fatwa Index on Feb. 3, Dar al-Ifta cited the popular Turkish television series "Dirilis Ertugrul" ("Resurrection Ertugrul") and "Valley of the Wolves" as examples of Turkey's attempts to use its soft power "to create an area of influence in the Middle East."

It also accused Turkish President Recep Tayyip Erdogan of trying to revive the Ottoman Empire and impose hegemony over the Arab countries that were previously ruled by Turkey.

The award-winning "Resurrection Ertugrul," an adventure series that debuted in Turkey in December 2014, is based on stories of heroism featuring the13th century warrior Ertugrul Ghazi, the father of Osman or Othman, who founded the Ottoman Empire. He is depicted fighting against a host of adversaries, including Crusaders and Byzantines for the cause of Islam.

"Valley of the Wolves," meanwhile, tells the story of a Turkish intelligence agent who hides his identity to infiltrate the Turkish mafia and carry out operations in Turkey and in neighboring countries.

"They [the Turks] export to the people and nations the notion that they are the leaders of the [Islamic] caliphate, responsible for supporting Muslims worldwide and are their salvation from oppression and injustice while also seeking to implement Islamic law," the statement said in reference to Erdogan and his supporters.

"The Turkish president and his followers are not immune from using religious discourse in general, and fatwas in particular, as a cover for their military operations," it added, drawing similarities between Erdogan and terrorist groups and organizations.

Amr Koura, a media expert, dismissed the warning as "an attempt by Dar al-Ifta to appease the Egyptian authorities" at a time of rising tensions between Egypt and Turkey.

Relations between Egypt and Turkey soured after Ankara offered refuge to Muslim Brotherhood leaders and supporters in the wake of the ouster of President Mohamed Morsi in mid-2013. The Islamic group, which rose to power after the 2011 uprising, was outlawed by Egypt and branded as a terrorist organization in September 2013.

But Turkish support for the Muslim Brotherhood is just the tip of the iceberg. Erdogan has on several occasions lashed out at Egyptian President Abdel Fattah al-Sisi, slamming him as an "illegitimate tyrant" and more recently, as "the totalitarian Sisi" over mass executions in Egypt.

"I refuse to talk to someone like him," Erdogan said in reference to Sisi after nine men sentenced to death for their alleged involvement in the murder of Egypt's prosecutor general in 2015 were executed early last year. Erdogan has also pointed the finger at the Egyptian government for what he termed Morsi's "suspicious" death, vowing to have the alleged perpetrators of the crime tried in international courts. Egyptian Foreign Ministry spokesman Ahmed Hafez, responding to the allegations, criticized Turkey as a "sponsor of terrorism in the region.”

He argued that Erdogan's "ironic remarks" about Morsi's death were "a desperate attempt to divert attention from his dwindling popularity and recent domestic and international defeats."

Tensions with Turkey have escalated in recent weeks after the Turkish parliament passed a bill in January to send troops to Libya to support the UN-backed government of Prime Minister Fayez al-Sarraj. Egypt backs Sarraj's rival, Gen. Khalifa Haftar, and insists the rebel commander "is the only bulwark against extremism in Libya." Egypt is vehemently opposed to a potential "Turkish military intervention in Libya” and has warned that any such troop deployment to Libya could "negatively affect the stability of the Mediterranean region."

The Dar al-Ifta warning against Turkish soap operas is the latest in a series of tit-for-tat measures that have included downgrading diplomatic relations between the two countries, calls from Egyptian legislators to boycott Turkish products and a defamation campaign against the Egyptian government by Ankara-based Muslim Brotherhood channels. On Jan. 14, Egyptian security forces stormed the office of the Turkish Anadolu Agency and arrested four employees, including a Turkish national, then referred them to state security on allegations of having supported terrorism.

"Turkish television series spread blatant propaganda and are used by the Turkish regime to rewrite history, often with the Turks in the role of heroes," Koura told Al-Monitor.

"They [the soap operas] may succeed in winning the hearts and minds of the illiterate masses who are often unable to distinguish between reality and fiction but they cannot fool educated viewers," he said.

He also hinted that jealousy could be a factor at play. "The Turkish series with their oft-breathtaking scenery of stunning landscapes and majestic palaces, attract visitors from Arab countries to Turkey, rendering the latter a fierce competitor of Egypt as a tourist destination."

Turkish television series, including the two above-mentioned action dramas airing on Netflix, are immensely popular with Egyptian viewers. Analysts attribute their popularity in Egypt and the rest of the Arab World to a number of factors, including cultural similarities, especially shared family values. In Muslim-majority Turkey as well as in the Arab countries (which are also predominantly Muslim), families are close-knit and the father, who is usually the breadwinner, is traditionally the respected figure of authority in the family. The extended families depicted in Turkish dramas are also representative of the multigenerational households in Arab countries. Besides, millions of female viewers in the Arab world can easily identify with — and are likely empowered by — the women they see in the Turkish soap operas. Often tackling such sensitive subjects as forced marriages, rape, divorce and extramarital affairs, Turkish soap operas such as “Noor” and “Forbidden Love” have inspired women across the Arab world to make their own choices in life on whom they marry, whether or not to work and whether to have children.

For some years after the Egyptian channels' ban on Turkish shows, Egyptian viewers watched the Turkish soap operas on some of the other Arab satellite channels such as the Saudi-funded broadcaster MBC. But in what some analysts described as "a blow to Turkey's soft power,” Saudi Arabia — previously a voracious consumer of the Turkish productions — decided to replace Turkish TV series with Arab and Latin American dramas. The March 2018 decision was prompted by a marked deterioration in relations between Saudi Arabia and Turkey over the latter's support for the banned Muslim Brotherhood. Turkey has also sided with Qatar in its rift with Saudi Arabia, the United Arab Emirates and Egypt; Turkey sent several food shipments to beleaguered Qatar after it was accused by neighboring Gulf states of "sponsoring terror.”

Last year, Turkey continued to be one of the world's top exporters of TV series, yielding a handsome revenue of $350 million from its television series. The majority of the viewers are Middle Easterners who watch Arabic-dubbed versions of the shows specifically targeting Arab audiences.

As an alternative to the Dar al-Ifta ban, Koura suggests countering the "Turkish on-screen interpretation of the Ottoman era with high-quality Egyptian productions that tell our version of historical events."

"So far, the $40 million 'Kingdoms of Fire' is the only Arab production challenging the Turkish narrative about the Ottoman era. And even that is a Gulf-funded initiative, not an Egyptian one," lamented Koura.

The new historical TV drama series launched on MBC in November is intended to "expose Ottoman tyranny," according to the Saudi Gazette. The series about life in the Arab lands under Ottoman rule 500 years ago has been dismissed by Turkish analysts as Saudi propaganda that seeks "to counter the good impression of Turkey" made by “Resurrection Ertugrul.” According to Turkish national broadcaster TRT, the series is "part of a broader effort by Gulf autocrats to recast the Ottomans in a negative light."

With each party offering its alternative version of history, the one thing that is clear is that culture is the new battlefront in the ongoing spat between Turkey and Egypt.