Why this TV series causes high drama between Cairo, Ankara

After a decade of Ottoman splendors shown in popular Turkish soap operas, "Kingdoms of Fire" casts Selim, the Grim as the villain. 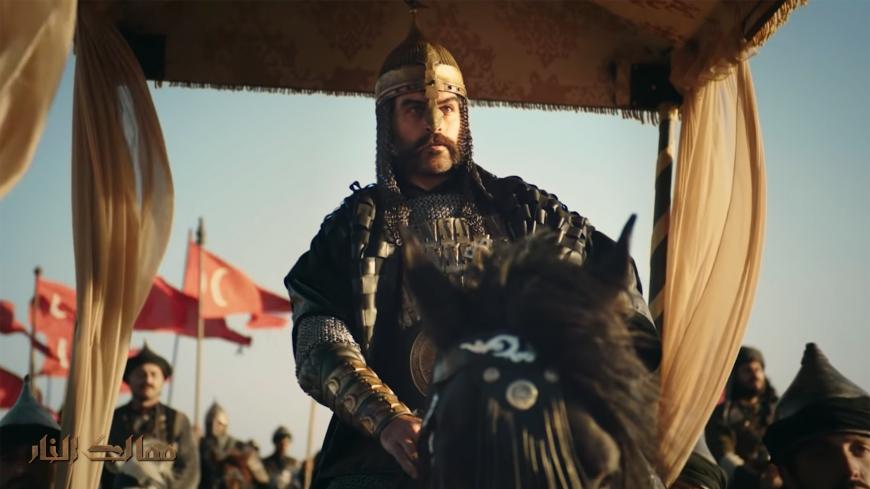 Turkish series, including shows about Ottoman sagas, have enticed audiences in the Middle East and beyond for the last decade. Particularly “The Magnificent Century,” a hundred-episode series of love and intrigue at the Palace of Suleiman the Magnificent, created a strong audience in the first half of the 2010s. However, a new series, “Kingdoms of Fire,” shows the dark side of the empire that ruled Egypt after 1517.

“Kingdoms of Fire” ("Mamlakaat al-Nar") tackles the struggle between the Mamluks and the Ottomans over the control of the Middle East, particularly in Syria and Egypt. Produced by the Emirati production company Genomedia, it is shown both on Saudi channel MBC and Netflix. However, it is not being streamed in Turkey.

The 15-episode series, directed by Peter Webber, brings together a group of Egyptian, Syrian, Moroccan and Tunisian actors. Webber made “The Emperor” in 2012 and “Hannibal Rising” in 2007 — both of which did well in the Middle East.

The historical drama revolves around two central figures: Sultan Selim I, the Ottoman ruler (r. 1512-1520) known as Selim the Grim, who is played by young Syrian actor Mahmoud Nasr. Toman Bay, the Mamluk sultan, is played by Khaled Nabawy, an Egyptian actor known for his leads in historical drama ever since his discovery by award-winning director Youssef Chahine in 1994.

The series revolves around how Selim I, who is trying to extend the empire he forcefully took from his father, is faced with the opposition of the people of Cairo led by the fighter-turned-leader Toman Bay as he fights to conquer Egypt.

The protagonist of the story, Toman Bay, takes over leadership after the assassination of Mamluk Sultan Qansuh El Ghuri by Selim I during the 1517 Battle of Marj Dabiq near the city of Aleppo. In the end, however, Toman Bay is betrayed by a Mamluk henchman and delivered to Selim I. Selim I orders him hung on Cairo's Bab Zuweila Gate, where his body remains hanging for three days before burial.

The $40 million series caused still another tension in Turkey’s strained relations with Egypt, due to Ankara's support of the banned Muslim Brotherhood and late President Mohammed Morsi. Ankara’s ties are also tense with Saudi Arabia — whose channel broadcasts the series — over the murder of dissident journalist Jamal Khashoggi at the Saudi Consulate in Istanbul. Moreover, the launch of the series is also believed to be strategically timed, to precede another Turkish production on the Ottoman Empire and the life and times of Osman, who gave the empire his name.

Given the political background, it came as no surprise when the fugitive Muslim Brotherhood leader Asim Abdel Maged signaled that his support was for the Ottomans, not the Mamluks. "What made me happy and more optimistic was that the hero of their series [Toman Bay] was defeated by the Ottomans who killed and hung him on Bab Zuweila in Cairo,” he wrote on Facebook Nov. 4.

But for Yasser Hareb, the series Emirati producer, it was very clear who the bad guys in his scenario were. “We are proud to announce the series … which we hope will open a new chapter in Arab drama,” he tweeted, saying that the series was about “Mamluk Sultan Toman Bay facing the Ottoman occupier Selim I in Cairo.”

The post got 1,500 likes but some challenged his description of the Ottomans as “occupiers” and the Mamluks as the locals, whereas the Mamluks were also an occupying force in Egypt. Faisal bin Fahad bin Jasim Al Thani, chairman of one of Qatar’s biggest conglomerates, tweeted that this sentence was “ignorance” coupled with hate. “Toman Bay and the Mamluks are Turks [not Egyptians], and the Ottomans are also Turks. So, if you consider the Ottomans to be an occupier, you need to concede that the Mamluks were, too,” he tweeted.

Mohamed Solaiman Abdul Malek, writer of “Kingdoms of Fire,” told Al-Monitor that he had anticipated that there would be controversy and criticism once the series came out, but that they had researched the history thoroughly to create an accurate narrative.

“The series is based on dozens of historical books on Ottomans and Mamluks. The series presents real historic facts 100%,” he said, underlining that the series was written in six months and shooting took eight. He also pointed out that one of the books that provided the basis of the series was “Badaʼiʻ az-zuhur fī waqaʼiʻ ad-duhur” (“History of Egypt”), written by Mohamed ibn Ilyas (1448-1522) who lived during the Ottoman conquest of Egypt.

“It is important to help people learn through the series the reality of the Ottoman rule in Egypt,” Abdul Malek said, explaining that there was a major difference between the Mamluks and the Ottomans. "The Mamluks were [soldiers] brought to Egypt when they were young during the Ayyubid caliphate to serve as soldiers to defend the country.”

The Mamluks, whose name literally means “owned” or “slave,” ruled Egypt as the soldiers and generals of the Abbasid caliphate between the 13th and 16th centuries. They were not native to Egypt but were slave soldiers.

“The Ottoman forces, on the other hand, occupied Egypt and killed Egyptians who tried to defend their country," Abdul Malek added. “Unfortunately, this picture is not clear in the Turkish historical soap operas. For many years we have undergone brainwashing on history with the Turkish series. New generations have seen those works from only their point of view that falsify history.”

Nelly Hanna, a professor in the Department of Arab and Islamic Civilizations at the American University in Cairo, told El-Watan that the series did not seek to defame the Ottomans, but show practices that really existed.

"The series shows that some of the Ottoman sultans killed their brothers. This is not political propaganda — this is a historical fact,” she said. “This was indeed the policy that started with Mehmed II, commonly known as Mehmed the Conqueror [due to his conquest of Istanbul in 1453], as he felt that it was necessary to maintain his power and prevent civil war. These historical facts are acknowledged by the Ottoman historians in Turkey as well.”

Historically, Selim acceded to the throne against the wishes of his father, who was killed after his son’s ascension to power. He also killed his younger brothers and eight of his cousins and nephews, fearing they would claim the throne.

In recent years, there have been requests in Egypt to remove the name of this violent sultan from streets and squares in the country. The first attempt was in February 2018 when the Egyptian authorities decided to remove Selim’s name from a street in the Zeitoun neighborhood in the east of Cairo.

Ironically, the proposal had come from Mohamed Sabri al-Dali, professor of History at the University of Helwan in Cairo and one of the history consultants for the series. He stressed that it is not right to remain naming the street after an occupant to the country who committed crimes against Egyptians.

Earlier this month, Tariq Mahmoud, a lawyer specialized in constitutional law, sent an official warning to Minister of Local Development Mahmoud Sahrawi calling for an immediate decision to remove the names of all Turkish sultans from the streets and squares of Egypt, and to be replaced by the names of martyrs of the army and police.

"Turkey's President [Recep Tayyip] Erdogan is still practicing the same policy toward the Egyptian state by supporting terrorism and providing the fugitive Muslim Brotherhood leaders with a safe haven," he said.

For some viewers, however, “Kingdoms of Fire” is simply a successful series — irrespective of the political controversy surrounding it.

Mohamed Mansour, an engineer, told Al-Monitor that he is proud that Arabs produced a successful series of international standards. "In the end, this is fiction, not a documentary,” he said.

Manar Saeed, a housewife, told Al-Monitor that she had no idea about that period before watching the series. "The series made me think and search on the internet to know more about Egypt at that time. It is really worth watching. I hope the producers provide more works on our history like this,” she said.