A new multimillion-dollar series on a Saudi TV channel broadcast across the Middle East depicts Ottomans as tyrants who ravaged the Arab world. 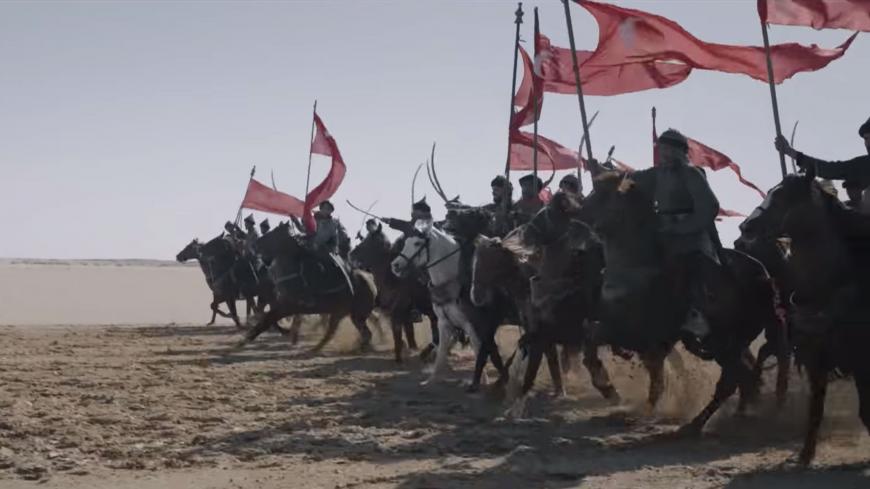 Relations between Ankara and Riyadh — already strained due to a number of factors, including the murder of Saudi journalist Jamal Khashoggi — are set to take another turn for the worse over a television series that launched Nov. 17.

The 15-episode-long “Kingdoms of Fire” ("Mamlakaat Al-Nar"), which began airing on the Saudi-owned, United Arab Emirate-based MBC channel, is a $40 million production that vilifies Ottomans as “tyrannical occupiers who ravaged the Arab world for centuries.”

Peter Webber, whose films include the much-celebrated “Girl with a Pearl Earring,” directs the historical drama. Egyptian writer Mohamed Solaiman Abdul Malek wrote the screenplay, and its cast includes many well-known Arab actors. The series claims to provide a dramatic but factual rendition of the defeat of the Mamluks by the Ottoman Sultan Selim the Grim in 1517, and the advent of Ottoman rule.

Supporters of the series in the Arab press claim that it “puts historical facts in perspective” and reveals the true face of Ottoman rule over the Arabs.

“The drama, one of the most recent big works of art, highlights the bloody history of the Ottomans and their aggression against the Arabs, such as their tyranny, entrenchment, criminality and theft of Arab history,” the Saudi Gazette wrote.

“The series reveals the fact that the Turks now eagerly attempt to hide their history that is full of blood and evil conspiracies,” wrote Mustafa Marie in Egypt Today.

These views are diametrically opposite of the narrative President Recep Tayyip Erdogan’s Islamist administration has been trying to promote since coming to power in 2002.

Even before Erdogan and his Justice and Development Party, the official Turkish line held it that Ottoman rule had benefited the Arabs and the Middle East fell into turmoil after the Ottomans were expelled.

The demise of Islamic Ottoman rule in the region is traditionally blamed on the “betrayal of backstabbing Arabs who sided with Great Britain during WWI.”

After coming to power, Erdogan reached out to the Arab world in the name of Islamic solidarity and tried to dispel this notion. He blamed the alienation between Turks and Arabs on the mistakes of the secular Turkish elite.

In 2010, he cited the poem “I am Albanian" by Turkey’s national poet, Mehmet Akif Ersoy — composer of Turkey's national anthem — in which he says “a Turk cannot live without an Arab.”

Ersoy's poem reads: “Whosoever says he can is mad because the Turk is the right eye and right hand of the Arab."

Although he underestimated the abiding force of Arab nationalism, Erdogan nevertheless appeared to be making headway with the Arab masses.

This becomes more apparent after he championed Hamas and delivered a public roasting to Israeli President Shimon Peres in 2009 at Davos, during which he accused Israel of being an adept killer of Palestinian children.

Erdogan turned into the darling of Arab streets overnight after that, but Arab regimes — always wary of Turkish interferences in the region — were less than pleased to see a non-Arab Turkey trying to grab their thunder.

Nevertheless, Arab regimes — unlike most Balkan countries — were mostly reticent about their Ottoman past until recently. That seems to be changing now.

“Kingdoms of Fire” appears to be an answer to major Turkish productions like “Resurrection: Ertugrul” or “The Magnificent Century,” which glorify the Ottoman Empire and continue to be widely watched on Netflix in the Middle East.

Meanwhile, soaps depicting modern-day Turkey and especially relations between men and women are also highly popular in the Arab world, much to the annoyance of Saudi Arabia’s ultra-conservative Wahhabi establishment.

Although “Kingdoms of Fire” has received much praise across the MENA region, some Arab voices have spoken out against it, accusing it of distorting history. Not surprisingly, these voices are mostly in Qatar, which is the only Arab country Turkey has solid ties with today.

“Kingdoms of Fire,” which is listed as the largest Arab production of 2019, has all the trappings of the modern film industry. It includes lavish costumes and well-choreographed war scenes. As such, it appears to be an answer to equally lavish Turkish productions that glorify Ottomans.

This series can also be taken as a sign of the growing political, cultural and military threat that Arab regimes perceive from Turkey since the failed Arab Spring.

MBC network, which is listed as the “largest private free-to-air satellite broadcasting company in the Middle East and North Africa region,” announced in March 2018 it had been instructed to ax Turkish programming from its channels.

Turkey’s unqualified support of the Muslim Brotherhood and its castigation of the 2013 Saudi-backed coup in Egypt that toppled Erdogan’s close friend and fellow-Islamist Mohammed Morsi were the initial catalysts of the animus between Ankara and Arab capitals.

Erdogan continues to bemoan the fate of Morsi, who died while in custody in Cairo last June. He brought the topic up angrily at the United Nations General Assembly last September. Erdogan also continues to champion justice for Khashoggi at every opportunity that presents itself.

The most recent sign of Turkey’s tensions with the Arab world came after Ankara launched Operation Peace Spring in northeastern Syria, prompting Egypt to convene an emergency session of the Arab League.

Following the session, Arab League Secretary-General Ahmed Aboul Gheit called on the United Nations to act against Turkey’s “invasion” and “aggression” against an Arab state.

Given this backdrop, the timing of the release of “Kingdoms of Fire” is not a “coincidence” for Turkish commentators. Many are arguing this is part of an anti-Turkish plot hatched by Saudi Arabia, the UAE and Egypt.

“It was obvious from day one that a joint Saudi-UAE production, with the scenario written by an Egyptian and directed by a Brit, had to be far from being a work of art alone,” wrote Zekeriya Kursun in the pro-government Yeni Safak.

“The main objective is to portray the Ottomans as invaders in the Arab region and, with a subtle message, lead on that Turkey’s current regional policies serve the same aim,” Kursun wrote.

He argued, “The timing of the series’ launch coinciding right after [Operation] Peace Spring is also a clear indication of the goal it seeks to serve.”

Ibrahim Karagul, Yeni Safak's firebrand editor-in-chief, did not mince words. Addressing the rulers of Saudi Arabia and the UAE, Karagul wrote, “If you carry on in this way, another Selim [the Grim] will appear and you will live 1517 all over again. Your position today is worse than that of the Abbasids.”

According to Miriam Berg from Northwestern University in Qatar, Turkish cultural products have played a key role in transforming negative images of Turkey and its Ottoman past into more positive ones among Arabs.

“By producing a series that disputes this, they are trying to re-create an age-old Arab narrative of the terrible Turk,” Berg told the government-controlled Turkish TRT World international news channel when asked to comment on “Kingdoms of Fire.”

The fact that this series purports to depict their historical past is another factor that will increase the Arab audience’s interest in this period drama, while at the same time contributing to negative feelings about Turkey.