Egypt’s Dar al-Ifta described the Ottoman conquest of Constantinople as an invasion, raising controversy in Turkey and among critics who believe religious authorities should not get involved in politics. 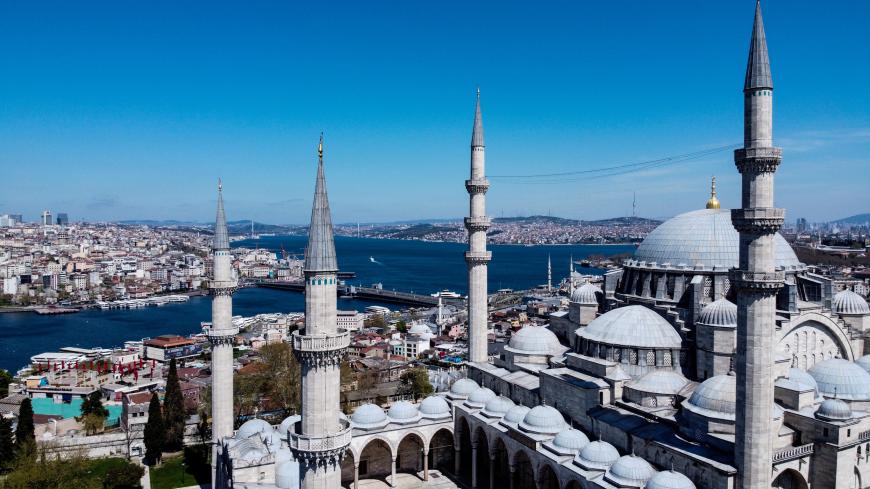 An aerial view of the Suleymaniye Mosque on the first day of the holy month of Ramadan, during a four-day curfew that was imposed to prevent the spread of the coronavirus, Istanbul, Turkey, April 24, 2020. - REUTERS/Umit Bektas

Dar al-Ifta, Egypt’s top institution for fatwas or religious edicts, has sparked widespread controversy when it described the Ottoman control of the city of Constantinople — Turkey's capital until 1923 when it was renamed Istanbul — as an occupation before it retracted and described it as a “great Islamic conquest.”

On June 7, the media center of Dar al-Ifta published a statement, titled, “Erdogan continues to use fatwa weapons to cement his tyranny at home and justify his colonial ambitions abroad.”

The statement criticized Turkey's internal politics and suppression of dissent, and said that Turkish President Recep Tayyib Erdogan is taking advantage of religious rhetoric “to achieve internal stability and victory over his political opponents.”

But what made Dar al-Ifta the subject of much criticism is its description in that statement of the fall of Constantinople, or the conquest of what is now called Istanbul, as an “Ottoman invasion,” in a paragraph devoted to condemning calls to convert the Hagia Sophia Museum into a mosque again.

“Hagia Sophia was built as a church during the Byzantine period in A.D. 537, and it remained [a church] for 916 years until the Ottomans occupied Istanbul in 1453; then they turned the building into a mosque,” the statement read.

The Egyptian religious authority’s stance was lashed out at, as it has described one of the most important Islamic conquests as an invasion in order to take a political stance in line with Egypt's policies against Turkey.

On May 29, Erdogan celebrated the 567th anniversary of the conquest of Constantinople, standing on one of the balconies of the presidential Huber Palace overlooking the Bosporus. Thirty boats, decorated with Turkish flags and banners, passed in front of Erdogan’s palace to greet him.

In his speech, Erdogan considered the conquest of Constantinople as a symbol of “reconstruction, advancement, justice and love,” and asked God to grant the Turkish people “more conquests, victories and successes.”

According to the online encyclopedia Britannica, the conquest of Constantinople was carried out by Sultan Mehmed II of the Ottoman Empire. “[The Byzantine Empire] came to an end when the Ottomans breached Constantinople’s ancient land wall after besieging the city for 55 days,” it states, continuing, “[Mehmed II] surrounded Constantinople from land and sea while employing cannon to maintain a constant barrage of the city’s formidable walls.”

“The fall of the city removed what was once a powerful defense for Christian Europe against Muslim invasion, allowing for uninterrupted Ottoman expansion into Eastern Europe,” the online encyclopedia adds.

On June 8, Dar al-Ifta published a post on Facebook, confirming its position on Erdogan and “using the fatwa weapon to confirm his tyranny.”

However, it retracted from the description of the conquest of Constantinople as an invasion, and the post stated that it was "a great Islamic conquest and it was done by the great Ottoman Sultan Mehmed II. Erdogan has no connection with Mehmed.”

Mohamed Abu Hamed, a member of Egypt’s parliament, said that the attack by the Muslim Brotherhood and Turkish media comes after Dar al-Ifta revealed the use of the fatwas weapon by Erdogan to move ahead with his tyranny at home in the name of religion and justify his ambitions abroad in the name of the alleged caliphate.

“The conquest of Constantinople was carried out by Sultan Mehmed II and is an important Islamic conquest. But at the same time, the Turkish president had nothing to do with Mehmed II,” he told Al-Monitor.

He added that Erdogan is using religion to justify his political actions and interference in regional countries, as well as his ambitions to restore the Ottoman Empire.

But critics say that Dar al-Ifta is mixing religion with politics and this may ignite more tensions in the region based on this approach.

Amr Hashem Rabie, deputy head of Al-Ahram Center for Political and Strategic Studies, said that Dar al-Ifta is only concerned with issuing religious edicts and not with commenting on the political policies of presidents and state leaders.

“This kind of attitude politicizes religion and this is the same approach that is usually criticized by the state,” Rabie told Al-Monitor.

The Egyptian Dar al-Ifta remains the subject of much political controversy. Less than a month ago, it sparked a similar controversy because of a leaflet calling on Egyptians to watch a TV series called “Al Ikhtiyar” (“The Choice”), which portrays the biography of Egyptian army Col. Ahmed al-Mansi.

Dar al-Ifta wrote in an April 29 post on Facebook, "Islam did not prohibit purposeful art that transcends the soul and elevates feelings unlike the arts that address the instincts and lust."