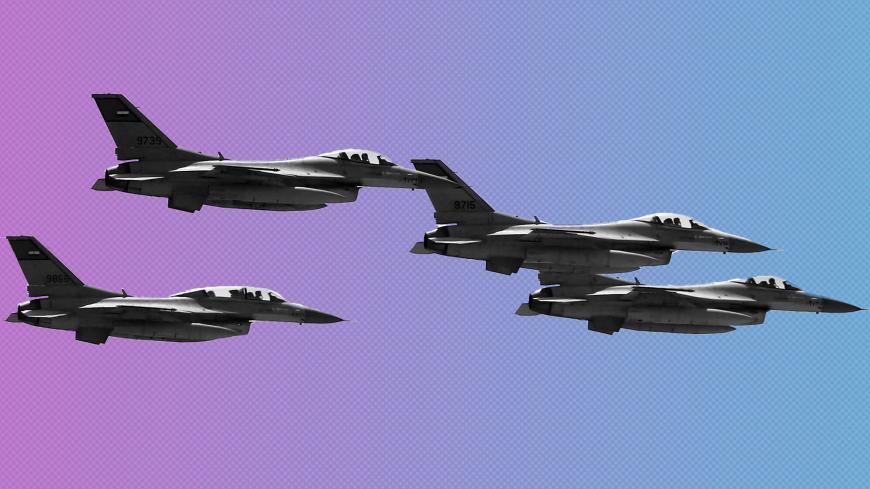 Military spokesman Col. Tamer al-Rifai published an official statement Jan. 13 on his official Facebook page, stating that “the Egyptian air force has done this redeployment with the help of the Egyptian navy while carrying out their tasks to secure economic interests in the Red Sea and the Mediterranean Sea operations.”

In the same statement, Rifai said the Western Military Region Command affiliated with the army carried out a number of exercises and training along the Libyan land and coastal borders in cooperation with the main branches of the armed and border guard forces as part of Qadir 2020. It also carried out many tactical projects with live ammunition in order to secure the coasts, he noted, adding that paratroopers conducted a number of training activities to increase preparedness.

Maj. Gen. Mohamed al-Shahawy, adviser to the army's Command and Staff College, told Al-Monitor over the phone that the army carried out the Qadir 2020 maneuver because the state is exposed for the first time to a very special type of threat very close to its western borders in light of the ongoing war and instability in neighboring Libya.

Shahawy said this comes after the Turkish parliament approved the deployment of military forces to Libya to support the Government of National Accord (GNA) headed by Fayez al-Sarraj in its war against Field Marshal Khalifa Hifter, who is backed by Egypt.

The Turkish parliament had approved a law Jan. 2 allowing the deployment of Turkish military forces to Libya after Turkish President Recep Tayyip Erdogan issued a memo to support the GNA in its war against Hifter, whose forces control eastern Libya.

After that, the Egyptian Ministry of Foreign Affairs issued an urgent statement on the same day, Jan. 2, in which it strongly condemned Turkey's interference in Libyan internal affairs. It also called on the international community to address these dangerous developments. Meanwhile, the National Security Council headed by Egyptian President Abdel Fattah al-Sisi met on the same day to discuss the Turkish military intervention in Libya and the threat of Egyptian interests on the western border, according to a presidential statement issued Jan. 2.

The National Security Council is made up of the president, the prime minister, head of General Intelligence, the parliament speaker, and the ministers of defense, interior and foreign affairs, along with other ministers. It specializes in facing disaster and crisis situations and identifying the sources of dangers to Egyptian national security and the necessary measures to address them.

Shahawy said the Qadir 2020 maneuver is a “war training” project and includes wide-ranging military exercises carried out by the armed forces in a number of axes, mainly at the Berenice Military Base south of the Red Sea, to send clear and unequivocal messages to the Turkish side, which intervened in Libya without having the right to do so, thus violating the rules of international law in this regard.

“Redeploying Egyptian aircraft across various air bases in coordination with the Egyptian air defense forces is primarily aimed at knowing the Egyptian army's operational ability on the ground. It also aims to raise full preparedness in the event of a war or a military strike in some areas, especially after the tension with Turkey and the complex security situation in Libya, as well as other terrorist acts that come from the Libyan surrounding and extremist groups on the western borders of Egypt,” Shahawy noted.

He stressed that this maneuver also aims to secure the northern Egyptian border overlooking the Mediterranean Sea, especially the Zohr gas field and various other gas and oil sources.

Shahawy pointed out the special importance of Sisi’s participation in the Qadir 2020 opening ceremony and the clear indications of his presence as the highest-ranking official in Egypt to oversee these huge maneuvers, in which the Mistral helicopter carrier and a number of combat ships, submarines and attack helicopters in the air force are taking part.

During the opening ceremony, Sisi also watched “Protecting a Homeland,” a documentary on the training activities carried out by the army during the Qadir 2020 maneuver.

On Jan. 18, Sisi saluted all the commanders and members of the Egyptian armed forces for their great performance during the opening of the Berenice Military Base, noting that “the opening reflected the professional capabilities of the armed forces and their efficiency and advanced combat preparedness.”

The Berenice base is located southeast of Aswan, on an area of 150,000 acres, and includes a naval base, an air base, a military hospital, and a number of administrative and combat units.

Berenice is the second military base Sisi has inaugurated; he opened the southern Mohamed Naguib Military Base in July 2017, which was also attended by Crown Prince Zayed Al Nayhan.

“The importance of this maneuver lies in thwarting off the threats on the western borders of Egypt after the Turkish parliament's decision to send military forces to Libya, which constitutes a threat to Egyptian national security,” Okasha said.

In addition, Okasha noted, the advanced fourth-generation fighter Rafale and a number of naval frigates also took part in the maneuver, “whose main objective is to protect Egypt's national interests and send a direct message to Turkey that Egypt can protect itself well in times of crisis.”