The recent terrorist attack that killed 26 Copts in southern Egypt pushed the army to launch airstrikes against militant camps inside Libyan territory. 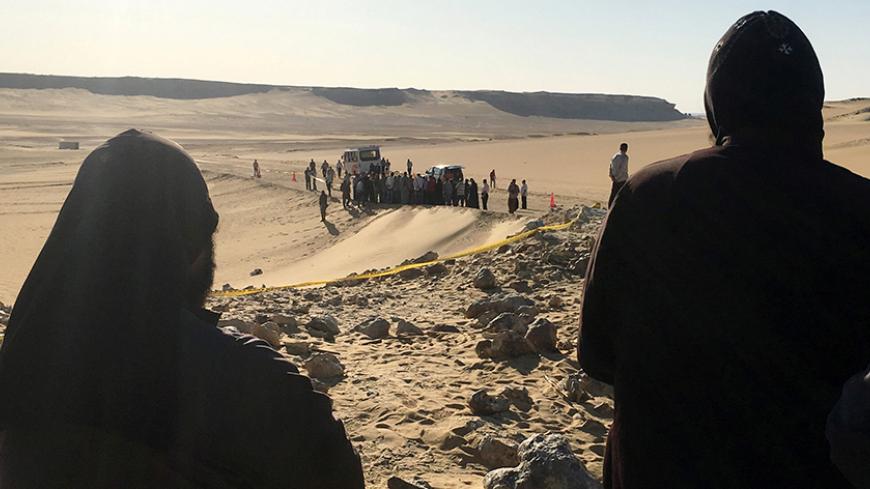 Monks look at the scene following an attack by gunmen on a group of Coptic Christians traveling by bus to a monastery in Minya, Egypt, May 26, 2017. - REUTERS/Mohamed Abd El Ghany

CAIRO — The Egyptian policy toward the Libyan crisis took a new turn following the attack on a bus carrying Copts in Minya province, in southern Egypt, on May 26 that killed 28 people, most of whom were children, and wounded 25 others.

Egyptian President Abdel Fattah al-Sisi responded on the same day by ordering airstrikes against camps within the Libyan territories where militants responsible for attacks inside Egypt are believed to have been trained.

Sisi promised in a televised speech on the evening of the attack that he would not hesitate to launch strikes against terrorist camps training militants to carry out operations against Egypt. Indeed, Egyptian army spokesman Tamer al-Rifai vowed to renew airstrikes, which took place on May 26-29.

In October 2014, militants in the Libyan city of Derna pledged allegiance to the Islamic State and IS leader Abu Bakr al-Baghdadi accepted their allegiance in an audio recording posted online. However, in April 2016, the IS militants withdrew from Derna following bloody clashes with fighters from Derna’s Shura Council of Mujahideen, which includes Islamic militias, most notably al-Qaeda.

Although Egyptian officials stated that Egypt is standing at the same distance from all political parties in Libya, Cairo publicly supports the Libyan National Army (LNA) commander, Gen. Khalifa Hifter, who visited Cairo on several occasions. Most recently, on May 13, Hifter headed to Egypt to discuss the political and security situation with Sisi. In addition, Egypt sent its Chief of Staff of the Army Gen. Mahmoud Hijazi to participate May 16 in a military parade organized by Hifter.

Speaking at a joint conference with his Russian counterpart, Sergey Lavrov, after the strikes on May 29, Egypt’s Foreign Minister Sameh Shoukry defended his country’s right to strike back, asserting that militant training camps in Libya pose a direct threat to Egypt's national security. “The attack on the Christians proved that Libyan militants were capable of targeting Egypt,” he said.

Egypt has also informed the United States that the perpetrators of the Minya attack were trained in Libya. The Egyptian delegation to the United Nations delivered May 27 a speech at the Security Council saying that the strikes were in self-defense, to avoid any international blame. The UN-backed Libyan reconciliation government objected to Egypt bombing Libyan territory.

In this context, Maj. Gen. Zakaria Hussein, the former chairman of the Nasser Military Academy, told Al-Monitor that the Minya incident is an attack on Egyptian national security. Borders were infiltrated and defenseless citizens were targeted, he said, adding that Egypt had to launch these strikes in retaliation for what had happened.

Hussein said that the strikes only aim to protect Egyptian national security from camps harboring terrorists and planning operations in Egypt. He noted that the strikes were based on accurate information and were strategically planned.

In a press statement May 27, the Libyan air force, led by Hifter, a close ally of Egypt, announced that it took part in the Egyptian strikes that targeted the previously determined positions of militants in Derna, in eastern Libya. The air force said the operation was successful and that the targeted al-Qaeda terrorists lost many of their militants and munitions.

The statement further said that the operation paved the way for the LNA’s entry into the town of Derna, to liberate it from terrorists.

Speaking on On Live channel May 29, the director of the National Center for Security and Strategic Studies in Egypt, Brig. Gen. Khaled Okasha, said that the strikes carried out by the Egyptian forces inside Libyan territory were legal according to international standards. These constitute a form of self-defense under Article 51 of the international law and were carried out in coordination with the LNA.

Okasha also expected Egyptians to show more coordination with the Libyan side in order to tighten border control and eliminate terrorist organizations in Libya. He noted that Egypt will try to convince the international community that Libya poses a threat to the entire world by proving that the perpetrators of the Manchester bombing and the Minya attack were all trained there.

He added that when Sisi announced launching the strikes, he made it clear to US President Donald Trump that terrorist groups are no longer a threat to Libya alone, but also affect the countries of the region as a whole, and therefore must be annihilated to keep Libya from turning into a haven for terrorism. With this, Sisi is calling on its US ally to provide international cover and political support to Egypt, giving it the freedom to carry out operations in Libya, according to Okasha.

Abdel Sattar al-Hatita, a researcher specializing in Libyan affairs, told Al-Monitor that Egypt is playing a dual role in the Libyan crisis. “It seeks to find a political solution and bring together the conflicting Libyan parties, while at the same time it supports the LNA, represented by Hifter,” he said.

Hatita pointed out that Sisi has called for lifting the arms embargo as “the cornerstone for eliminating the terrorist threat in Libya,” as expressed by Sisi on several occasions.

The UN has imposed a ban on the export of arms to Libya since the Libyan revolution in 2011. However, US special envoy to Libya Jonathan Winer accused Egypt on Jan. 10 of sending weapons to Libya, which Egyptian Foreign Ministry spokesman Ahmed Abu Zeid denied.

Hatita added that the Egyptian strikes were in favor of Hifter’s army, since they were not only limited to eastern Libya but also included areas in the south and the west such as Jufra, Hun and the Libyan Jabel Akhdar. He also expected the operations to expand to other areas where the armed groups are present.

He said that Egyptian jihadis who have recently returned from Syria and fled from the Sinai Peninsula to Libya, are now trying to return to Egypt through the border to carry out operations inside.

On May 29, Al-Hayat newspaper cited an Egyptian source as saying that the Egyptian army is determined to secure the western border through intelligence cooperation and coordination with the LNA.

Speaking to Al-Monitor, political science professor at Cairo University Hassan Nafaa said the political leadership in Egypt only launched the strikes after it felt trapped. From the east, Wilayat Sinai, IS’ branch in Egypt, is highly active, and from the west, Libya continues to fail as a state in light of the increasing activity of extremist groups, namely IS, looking for a safe haven after suffering several defeats in Iraq and Syria.

He said that Libya is of great importance to Egypt, since terrorist groups in Libya pose a direct threat to Egyptian national security. He noted, “Cairo does not trust any political Islam movement and thus could not find a party to rely on in eliminating extremist groups except for Hifter. Egypt is keen on bringing together Libyan parties under one government and a single political leadership.”

Nafaa said that after the Arab-Islamic-American Summit in Riyadh May 21, Egypt might have felt that the United States gave the green light to act freely in the Middle East in light of Trump’s stringent policy toward terrorist organizations. “The [Egyptian] political leadership might have sensed that the UN Security Council will not discourage Egypt from targeting Libya,” he said.

He concluded, “I think the current international and regional communities hit by terrorist attacks have become more convinced of Egypt’s strikes.”