Will Egypt launch its own official digital currency? 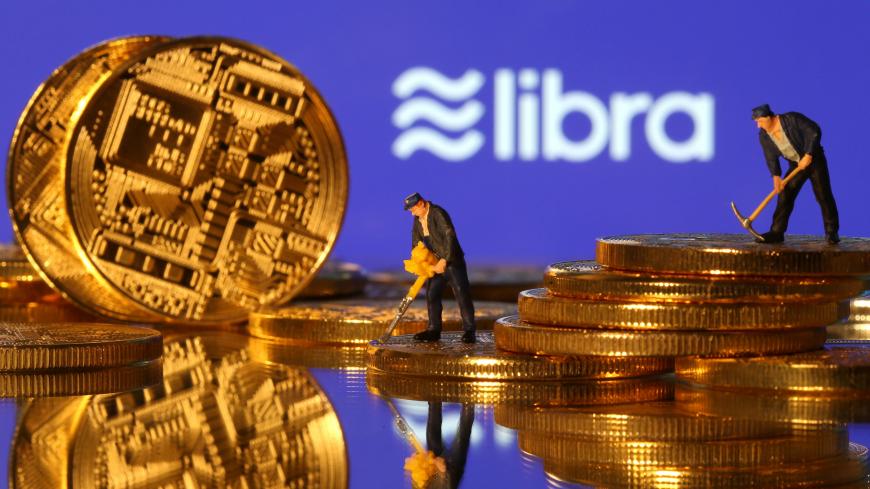 Small toy figures are seen on representations of virtual currency in front of the Libra logo in this illustration picture, June 21, 2019. - REUTERS/Dado Ruvic/Illustration

CAIRO — As Facebook said July 31 that major difficulties are impeding the launch of its digital currency known as Libra, several countries, including Egypt, felt the urge to find a way to deal with cryptocurrencies.

In its statement, Facebook said that although it still intends to launch its cryptocurrency system by 2020, a number of factors could scupper that timeline or even impede the currency’s launch entirely. Facebook said the digital currency would make the social media giant subject to governmental scrutiny in many countries, and this could negatively affect Facebook’s business, reputation and financial results.

In May 2018, Facebook announced that it was seeking to launch its own cryptocurrency in dozens of countries, but the July 31 statement said that the initiative faces a great deal of criticism from regulators and lawmakers around the world.

These concerns were echoed by the Group of Seven. French Finance Minister Bruno Le Maire told the French Senate in July, “My determination to make sure that Facebook’s Libra project does not become a sovereign currency that could compete with the currency of states is absolute,” and added, “because I will never accept that corporations could become private states.”

Some European Central Bank reports also voiced concerns over the negative effect that Libra could have on the financial and economic stability of countries it could be launched in due to its possible exploitation for money laundering and terrorism financing.

The currency would be traded through Facebook accounts; as some of these users resort to fake names, this could make it impossible to track them down.

A well-informed source in the Central Bank of Egypt told Al-Monitor on condition of anonymity that the bank had not taken any precautionary measures against Libra in Egypt as Facebook had yet to announce whether or not Egypt was among the countries where the currency was going to be launched and because many veteran policymakers in many central banks around the world were confident that the currency was not going to see the light of day. Otherwise, Facebook would have come under strict scrutiny.

He said no final decision has been taken about developing an Egyptian cryptocurrency due to many question marks and suspicions regarding digital currencies.

“Why is there a need for such currencies that are traded and transferred from an account to another under pseudonyms away from any scrutiny?” he asked.

Ahmed Adam, former head of research at the National Bank of Egypt, told Al-Monitor that the only reason people resort to secret accounts and names is that a large part of them are involved in money laundering and terrorism financing activities.

“There was a time when there was an increased demand for some of these currencies, as was the case with bitcoin, whose price increased between 2016 and 2018 as many speculators bought the currency to turn a quick profit,” he added.

In 2017, the Central Bank of Egypt warned citizens against trading in digital currencies, especially bitcoin, after the Egyptian security forces arrested many individuals on charges of committing fraud by using the currency.

However, Mohamed Hashem, who worked as a banking expoert at the Suez Canal Bank, told Al-Monitor that as digital currency can be used to finance terrorism and money laundering and "its devaluation can harm citizens, similarly to what happened with many bitcoin speculators in 2018, digital currency needs to be regulated.”

But Hosny Hassan, a professor of finance and economics at the University of Benha, told Al-Monitor, “Digital currency users take advantage of the secret character of trading to escape government oversight. They believe, wrongly so, that they can turn a quicker profit since the exchange rate is not determined by the government but is based on the law of supply and demand. This makes official digital currency, whose price is determined by the government, unattractive.”

He said many capitalists are now well aware that traditional currency derives stability from official supervision techniques and cash reserves. Digital currency, however, can squander the wealth of individuals if the cybercurrency loses a great part of its value and businesses trading in digital currency go bankrupt, similarly to what happened with thousands of bitcoin users with the 2018 currency price collapse.

Some businesses trading in cybercurrency closed due to the heavy losses they incurred in the wake of a drop in bitcoin prices. When a traditional bank goes bankrupt, it can still return people's deposits and cover their balances through cash and gold reserves, among other means. This, however, is not the case with businesses that hold digital currency accounts due to a lack of reserves.

He said that while there is a huge institution behind Libra, this is the very reason preventing its launch.