The Central Bank of Egypt has warned against dealing with cryptocurrencies, particularly bitcoins, arguing that investing Egyptian capital in such a volatile pursuit could negatively impact the nation's economy. 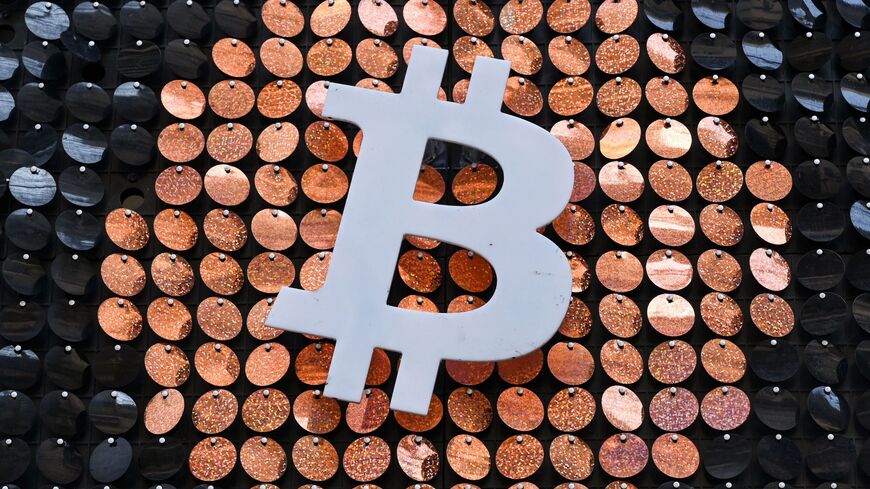 The logo of the Bitcoin digital currency is pictured on the front door of an ATM in Marseille, southern France, on Jan. 8, 2021. - NICOLAS TUCAT/AFP via Getty Images

CAIRO — The bitcoin price has shot up to unprecedented levels.

In a March 28 statement, the Central Bank of Egypt warned Egyptians against dealing in cryptocurrencies, stressing that Egypt works only with official currencies approved by the bank. The statement explained that cryptocurrencies are subject to extreme fluctuation in value since they are not issued by central issuing authorities in any country and not backed by tangible assets such as gold reserves.

Ahmad Shawqi Soliman, an economic researcher at the Faculty of Commerce of Al-Azhar University in Cairo, said in televised statements on April 4 that cryptocurrencies like Bitcoin may attract many Egyptian investors with potentially lightning profits. He warned that such investments could negatively affect interest in other types like direct investments, stocks or real estate and threaten the stability of the Egyptian economy.

There are no statistics available about the impact of Egyptians’ demand on cryptocurrencies, namely bitcoins, on direct investments or investments in real estate. The rise in the bitcoin, however, coincided with severe drops in the Egyptian Stock Exchange, which saw historical losses during the month of March. The market lost about 54 billion Egyptian pounds ($3.4 billion), declining by 7% from 785 billion Egyptian pounds ($48.4 billion) to 704 billion pounds ($45 billion).

Lawyer Ahmad Mizar said in a televised interview back in February that the Central Bank’s repeated warnings to citizens to avoid cryptocurrencies are an effort to enforce the law, which prohibits dealing in such currency without a license.

According to Article 206 of the Central Bank and Banking System Law, which entered into force in September 2020, it is prohibited to issue, trade in and promote cryptocurrencies, to establish or operate platforms for its circulation without a license from the Central Bank’s board of directors. Those who violate the provisions of Article 206 are punishable by prison or fines from one to 10 million Egyptian pounds ($63,569-$635,694).

A bitcoin miner who preferred not to be named told Al-Monitor that the Central Bank is unlikely to issue such licenses.

“The Central Bank’s recent statement confirms that the authorities reject cryptocurrencies. They stopped a project to issue an Egyptian digital currency under consideration,” the source said.

Back in 2019, the Central Bank began to explore creating an Egyptian digital currency. The bank’s team was expected to complete the study by 2020, but no such achievement has been announced.

The miner criticized world governments' policies on digital and cryptocurrencies.

“Governments are fighting these currencies because they want to maintain control over bank transfers, traditional currencies, cash and banks' customer data. They want to keep controlling the exchange rate by [increasing or decreasing] the printing of bills while keeping the reserves the same,” he said.

“Cryptocurrencies are designed using blockchain technology, which does not allow even its designers to track their transfers, identify their owners or to issue more currency, or even to modify the algorithms that control their prices. For instance, there are only 21 million bitcoins available in the world and this number cannot be increased. Therefore, supply and demand control the currency’s value without any interference from its makers or governments,” the source explained.

He went on, “The cryptocurrency price does not reflect its true value. In fact, over the past two months, the bitcoin price boomed when American businessman Elon Musk, one of the wealthiest men in the world, promoted bitcoins, which increased the currency price. This propaganda was what caused a surge in the bitcoin price, something that could backfire if Musk [sold off or] stopped investing in bitcoins,” he said.

The professor added that the “digital currencies the Central Bank was considering are designed to protect customer data. These currencies will be managed through e-wallets that will be an alternative to traditional banks. Establishing e-wallets for such currencies may require identity verification, but the details of the transactions and the value of balances will only be known to the holder of the account/wallet, unlike traditional bank accounts, whose balances and transactions are accessible to the banks’ staff.”

“Transactions will be done through encrypted communications between users and such wallets, such as PayPal or Payoneer,” he noted.

The professor stressed that digital wallets may be vulnerable to piracy, unlike cryptocurrency platforms that are designed with blockchain technology. However, he believes that non-crypto digital currencies are more secure because piracy is a limited threat, protection systems are constantly improving and because digital currencies will be backed by cash reserves at the Central Bank of Egypt, which will regulate its trading policies to avoid manipulation of demand and ensure that its price reflects its true value.