Turkish citizens are increasingly investing in cryptocurrencies to shelter savings from the volatile Turkish lira and possibly make profits on the side, a trend that has led to both increased risks and increased government regulations. 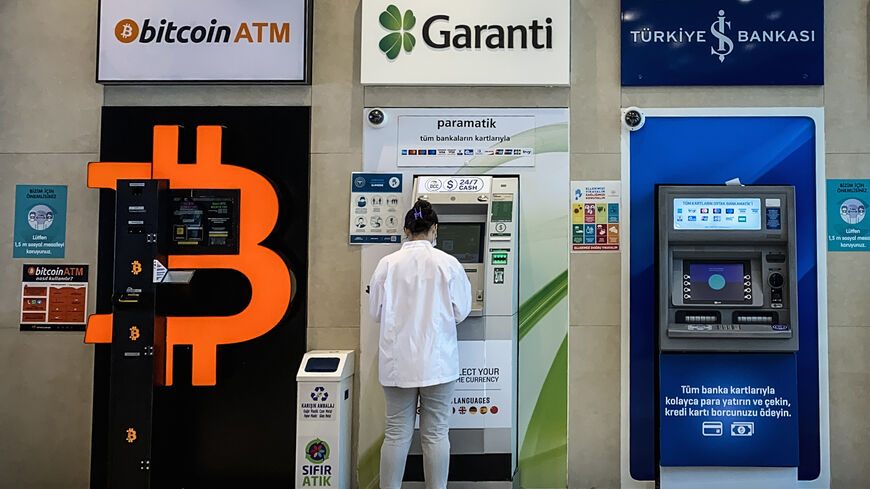 A woman uses a bank ATM next to a Bitcoin ATM at a shopping mall on April 16, 2021, in Istanbul, Turkey. - Chris McGrath/Getty Images

ISTANBUL — Once ridiculed for his enthusiasm for cryptocurrencies, Cihan Azboy, a shopkeeper in Turkey’s southeastern province of Batman, says everyone is now asking him how to invest in fast-growing and sometimes risky crypto exchanges.

The queries reflect a rising national interest in digital currencies, best visualized by a recent spike in crypto-related Google searches, particularly in Azboy’s region, where job prospects and income levels are lower than in western Turkish provinces.

After making initial gains in trading, Azboy started mining cryptocurrencies about five months ago, and his profits soon caught the attention of neighbors and family members, most of whom he says have since invested in cryptocurrency exchanges.

“The only people I know that are not investing are religious and say it’s haram,” Azboy told Al-Monitor. “In response, I ask them where it says no cryptocurrencies in the Quran, and they can’t show me.”

Azboy recently convinced his mother to convert her gold savings into cryptocurrencies and said within a month she saw a 4,500-lira ($545) investment rise to 8,500 liras ($1,030). The news encouraged even more family members to embrace the crypto economy.

Yet the gains came amid a broader boom in top cryptocurrencies, which mostly increased in value over the last month, but could just as easily crash, laying waste to the savings of less cautious investors. Asked what he would do if trends turned negative, as they did for Bitcoin on May 13, Azboy said “crashes are normal.”

“What goes down must also come up,” Azboy told Al-Monitor. “Crashes are actually an opportunity to buy more cryptocurrencies. You have to take risks if you want to do this, and cryptocurrencies might be less risky than keeping savings in liras at this point.”

The higher interest in cryptocurrencies has also come with higher risks and new regulations as Turkish institutions seek to prevent illicit activities and protect investors against fraud. Still, due to the decentralized nature of digital currencies, such regulations may fall short of their aims. With more Turkish citizens taking up cryptocurrencies with each passing day, market analysts and participants say the best precaution is for investors to educate themselves until governments get a better grasp on what they readily claim is the future of finance.

Turkey saw a spike in cryptocurrency trading in late March, when the surprise ouster of Central Bank Governor Naci Agbal sent the lira down 13% against the dollar. The move accelerated a local trend toward cryptocurrencies, raising Turkish crypto trading volumes up to 23 billion liras March 20-24, compared to 1 billion liras during the same period in 2020, according to Chainalysis data reviewed by Reuters.

Supporters of the crypto economy told Al-Monitor that digital currencies have gained favor locally because they provide investment opportunities removed from pandemic-hit Turkish markets as well as facilitate instant, low-fee international money transfers not available through traditional avenues. In addition, they said the relative ease of crypto transactions allows access to financial services for “unbanked” individuals, as an estimated 19 million Turkish citizens remained without bank accounts in 2020.

For those with lingering apprehensions, the sudden shift toward crypto gained an extra boost of credibility in mid-April, when Royal Motors, which sells Rolls-Royce and Lotus cars in Turkey, became the first business in the country to accept cryptocurrency payments. Then came a wave of concern.

“It’s a way to compensate for the negative economic consequences of the pandemic, sure, but without questioning what they are, people are rushing to invest in cryptocurrencies, especially in daily trading, and this becomes more and more risky,” Polat told Al-Monitor.

On April 16, Turkey’s Central Bank banned the use of cryptocurrencies and crypto assets for purchases starting April 30, sending Bitcoin shares down more than 4% that day. Turkish citizens are still allowed to hold and trade cryptocurrencies, but the bank stated that using them in transactions could mean “non-recoverable losses” for the parties involved.

The move weighed on other major cryptocurrency values, which have since relatively recovered, but underlined the highly speculative nature of digital currencies as their share prices can be easily influenced by news developments or social media posts, including mere mentions by Tesla CEO Elon Musk.

“One of the values that positions Bitcoin as the flagship of cryptocurrencies is the fact that it is not being regulated,” Renato Fazzone, a senior managing director at FTI Consulting in Germany, told Al-Monitor. “So a government prohibiting the use of a cryptocurrency to buy goods or starting to regulate trading platforms can be seen as threatening to the whole idea of cryptocurrencies and can therefore have an impact on the price.”

Days after the new regulations were announced, Thodex, a cryptocurrency exchange based in Turkey, suddenly halted trading April 21 and its CEO Faruk Fatih Ozer fled abroad with what was initially reported as up to $2 billion in crypto assets belonging to about 400,000 clients. Believed to be in Albania, Turkish authorities issued an Interpol red notice for Ozer, who remains at large, and have since detained 83 people linked to the exchange and jailed six suspects pending trial, including his siblings.

Turkish Interior Minister Suleyman Soylu later said Thodex’ portfolio was estimated to be worth $108 million, but by then the episode had already underscored concerns regarding the credibility of local crypto exchanges, which saw some Turkish citizens lose their life savings.

The incident was followed by the collapse of another exchange, Vebitcoin, Turkey’s fourth largest, on April 24. Vebitcoin’s CEO Ilker Bas and three other employees were immediately detained and face investigations.

Both developments sent shocks through Turkish crypto markets but did not severely impact domestic trading. Experienced crypto traders told Al-Monitor the incidents only highlight the need for cautious investing on reputable exchange platforms.

“If you put a week of research into this, read a few books, then the news in Turkey shouldn’t freak you out, really,” Ugur, a cryptocurrency investor who gave only his first name, told Al-Monitor.

Ugur said not only are most regulations on cryptocurrencies easily circumvented, but a number of tools exist to safeguard crypto assets, the most common of which is a cold wallet, or an offline storage mechanism that makes assets more difficult to steal than those left in exchanges, such as those reportedly taken by the Thodex’s Ozer.

On May 1, cryptocurrency exchanges were added by presidential decree to a list of entities covered by Turkey’s terror financing and money laundering laws. The rules, effective immediately, hold crypto asset service providers responsible for ensuring the assets are not used for illegal activities. In 2019, Chainalysis reported illicit trade accounted for about 2.1%, or roughly $21.4 billion, of global cryptocurrency transactions.

The decree was followed by the introduction of “The Guide For Crypto Asset Service Providers,” released May 4 by Turkey’s Financial Crimes Investigation Board. The guidelines outline fines for failures to report suspicious transactions within a 10-day period.

Service providers will also have to verify client identities for suspicious activities, with client identification deemed mandatory for all transactions of 75,000 liras ($9,100) or more. In a May 6 appearance on CNN Turk, Turkish Finance Minister Lutfi Elvan dismissed rumors the state would ban local crypto services.

"We certainly do not have an approach like 'this should be banned,'” Elvan said during the broadcast Thursday. “We do not think that people trading in this area are malicious. Our citizens must be absolutely cautious, careful and should not take any action that could put their lives and income at risk. "

With the introduction of new regulations, some analysts tracking Turkish crypto trends say the measures could slow Turkey’s integration into the global digital currency marketplace, delaying homegrown innovations, with one predicting the rules might be a precursor to local taxes on cryptocurrency-related services.

Still, while most Turkish crypto enthusiasts interviewed by Al-Monitor did not welcome the regulations, they acknowledged some measures might be necessary to protect rookie investors from online scams.

Adem Beydola, a crypto trader and owner of Kripto Eksi, a Turkish-language Telegram group where a community of over 2,400 members share trading information and news, said at the very least exchanges should be required to have insurance, allowing them to safeguard client assets in the event of a hack.

“When you say regulation, people don’t tend to trust the government,” Beydola told Al-Monitor. “They think the government wants to make regulations to get higher taxes, not to protect people, and I can understand these concerns.”

He continued, “But good regulations for this ecosystem will help improve it. Having no regulation at all can also cause market manipulation.”

Courts and the law
Cybersecurity