Soaring prices of cryptocurrencies, most notably Bitcoin, are tempting many unemployed Egyptians seeking to achieve quick gains, amid fears of Bitcoin being exploited to finance terrorism or illegal trade. 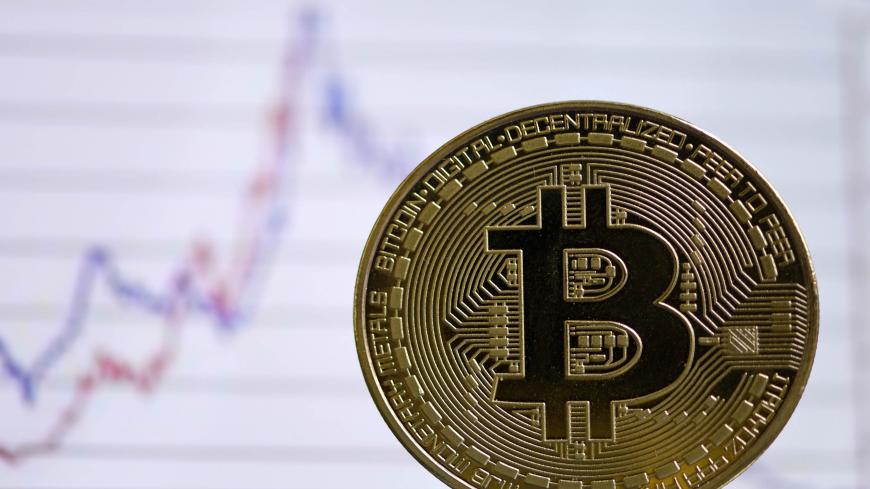 The photo shows a physical imitation of a bitcoin in Dortmund, Germany, Jan. 27, 2020. - INA FASSBENDER/AFP via Getty Images

CAIRO — Bitcoin daily value skyrocketed Sept. 16, according to the CoinDesk website specialized in tracking cryptocurrency news. It ranged between $10,662 and $11,099, with an increase of 32% compared to its value in September 2019, when it stood at $8,085. These rapid surges may lure many Egyptians toward Bitcoin trading as a means of achieving wealth.

Al-Monitor spoke to Muhammad Abd el-Baseer, Bitcoin mining and trading expert and a leading member of the Bitcoin Egypt Community, one of Egypt's professional online communities for those interested in cryptocurrency courses, advice and consultancy. Baseer confirmed a recent hike in the number of community members, considering it a sign of high demand of Bitcoin mining and trading in Egypt.

He argued that the huge business shift to online work from home along with reduced working hours and curfews are encouraging thousands of Egyptians to invest their spare time in unusual online businesses like mining and trading of cryptocurrenices, most notably the bitcoin. Online work from home, reduced working hours and curfews have been imposed since March as precautionary measures against the outbreak of COVID-19 in Egypt.

"The increasing number of Bitcoin miners and traders is a global phenomenon that has been one of multiple factors behind an increase in demand for bitcoins, and by extension the rise in the price of the currency itself. This allowed those who obtained it during the past year or the first months of this year at prices lower than the current one to reap unprecedented profits, and many Egyptians are eyeing these levels of profits through their investment in cryptocurrencies,” he added.

A Bitcoin miner, who is a member of many Bitcoin and cryptocurrency communities like Bitcoin Egypt, told Al-Monitor on condition of anonymity that he opted for this business after losing his job in a contracting company due to a downsizing amid the coronavirus outbreak. He invested in this trade what he managed to save over the past years.

Wael al-Nahhas, economist and financial adviser to a number of investment institutions in Egypt, told Al-Monitor that he thinks unemployment and recession resulting from the spread of the coronavirus and the precautionary measures taken are the main reasons behind the youths' inclination toward Bitcoin trading and mining.

Unemployment in Egypt jumped from 7.7% during the first quarter of 2020 to 9.6% during the second quarter; more than half a million Egyptians have lost their jobs.

The Bitcoin miner noted that the Bitcoin mining and trading business fields are attracting thousands of Egyptians, since they do not require huge capitals to start, while the savings and the capitals of millions of Egyptians are very few in light of the country's recession.

“Many young Egyptians started investing in small amounts despite the increase in the value of the bitcoin. They started mining Satochi, which is 100 millionth of a bitcoin, and on a daily basis they are making profits of 4% to 5% from the difference between buying rates during the timing of demand decline and selling rates at the time of peak demand, besides some quarterly or yearly profits from unexpected hikes in bitcoin rates,” he noted.

Ahmed Shuair, a lecturer of economics at Cairo University, told Al-Monitor that many Egyptians have been encouraged to mine and invest in cryptocurrencies after the brokers of cryptocurrencies had been able to provide guarantees on miners' balances protection by giving electronic payment cards to all their global customers, through which any amount can be withdrawn from ATMs at any moment.

“These are balances linked to databases of giant companies such as VISA or Mastercard and cannot be tampered with by any broker,” he said.

Baseer pointed out that the steps to order a payment card, have it shipped, delivered and set to a security key, besides the steps of using it to cash out the balance of the cryptocurrency wallet into traditional currencies (like the Egyptian pound) that can be withdrawn from ATMs, are very simple and that many Egyptians have already done this.

“The availability of those cards and the miners’ ability to withdraw in real time any part of their balances have encouraged more Egyptians to join Bitcoin and cryptocurrency mining and trading businesses, as it is granting its whole virtual and digitalized process of investment an easy materialistic result represented in the cash money outcome,” he said.

Al-Monitor searched for studies on the number of Bitcoin miners and traders in Egypt, but to no avail. However, Baseer said that more than 16,000 Egyptians have joined the community. “But the number of miners in Egypt should be greater, since each one of the 16,000 may train and guide many of their friends, family and neighborhood zones,” he added.

However, Nahhas warned that investing in bitcoins is not safe because brokerage offices do not provide the central bank of any country, including the Central Bank of Egypt, with a cash cover or gold reserve equal to the balances deposited with it. “In this case miners cannot recover their deposits and their balances from brokers if they go bankrupt or abstain from paying,” he said.

“This is not the only risk to Egypt. There are many risks of currency encryption and the inability to track digital currency ownership, even through brokerage offices — and so, some may exploit this secrecy in financing terrorism or illegal trade. This is why the Egyptian authorities are arresting and trying miners and traders of cryptocurrencies,” he added.

In June 2016, the authorities arrested a dentist for scamming groups of citizens by taking their money under the claim that they will invest for them in the mining of bitcoins and Ethereum, the second-largest cryptocurrency platform. A programmer was arrested on similar charges in June 2020.

On the future of Bitcoin in Egypt, he pointed out that the Central Bank of Egypt is expected to legalize cryptocurrencies soon. According to him, the Central Bank was preparing to issue a law for it in January, but the coronavirus outbreak may have changed the priorities of the bank.

But Shuair noted that many Egyptians will withdraw from this business once they feel the decline of profits when cryptocurrencies markets reach customer saturation. “This will make the jumps in the value of bitcoins less profitable like those of any fiat currency,” he concluded.