Lebanon is bursting with crypto mining shops, traders and online mentors to fulfill the surging demand from people desperately looking to gain financial freedom and much-needed US dollars. 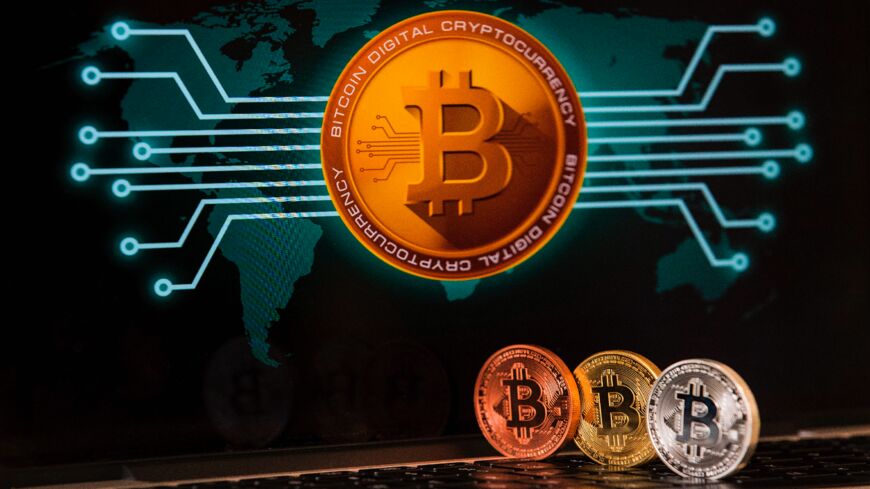 A picture taken on Feb. 6, 2018, shows a visual representation of the digital cryptocurrency bitcoin, at the "Bitcoin Change" shop in the Israeli city of Tel Aviv. - JACK GUEZ/AFP via Getty Images)

Bitcoin, a digital currency that emerged in 2008 and is now the most prominent in global circulation among other cryptocurrencies, seems to have gained the trust of Lebanese people more than traditional banks have.

The phrases “bitcoin mining” and “bitcoin trading” have become more in demand lately, but both differ in the form of operation.

Bitcoin mining involves “mining machines” and is performed by high-powered and sophisticated hardware that solves complex math problems, which in return rewards the miner with a bitcoin.

Lebanon’s first bitcoin ATM appeared on Beirut's Hamra Street and a second machine is coming, according to Mark Iskandar, the founder and CEO of Magmamining, a cryptocurrency company in Beirut.

Iskandar spoke to Al-Monitor about the demand for cryptocurrency in Lebanon, where many people have lost trust in the central bank and its institutions.

“The idea of a decentralized network and people being the owners of it is what influenced many people in Lebanon to invest in bitcoin mining,” said Iskandar.

Sellers of mining machines in Lebanon have become more popular through Tiktok, Telegram and WhatsApp. Many have had to rent warehouses to store the machines as demand continues to surge.

Despite Lebanon’s lack of electricity, many people are still willing to invest in those machines to mine bitcoins and other digital cryptocurrencies.

These machines consume a very high amount of voltage and amperage, meaning they dissipate heat that eventually increases their temperature, despite having inner cooling fans in their hardware.

Experts advise that these machines need a very respectable and fair amount of cool air to avoid overheating; hence, it is crucial that they’re placed in a spacious cool room to maintain their temperature.

Rabih el-Helou, a 26-year-old pharmacist, moved from Beirut to his village in Jezzine to meet the requirements for his mining machines to work smoothly.

Helou told Al-Monitor, “My home in Jezzine was very suitable for the mining machines to run successfully as it has spacious rooms, a cooler temperature and 24-hour-electricity, so moving from Beirut to the village was a wise decision.”

Residents of the town of Jezzine, which is powered by hydroelectricity, recently complained that the increased number of miners in different villages of the town had caused the system to overload, blaming the excessive use of mining machines.

While national statistics on the number of bitcoin mining and trading users in Lebanon have not been very accurate, Iskandar told Al-Monitor that his company has had an increase of 67% of people reaching out for mining installations, and overall his company had witnessed an increase in revenues by 145%. “We only expect this number to grow as time passes,” he said.

Beyond offering financial independence, cryptocurrencies are bringing the much-needed foreign currency to the cash-strapped people in Lebanon.

Due to the unregulated nature of this sector, economists in the country fear a new and desperate generation of bitcoin mining and trading addicts will emerge and may turn extreme in investments.

Rami Shmeit, an economic analyst, told Al-Monitor more about the risks in the cryptocurrency market, especially in Lebanon, given that many are taking advantage of people’s desperation to earn foreign currency from bitcoin mining and trading.

“I know guys who have sold their cars, jewelry and home furniture, and many have quit the Lebanese army to invest their money and time in mining despite lacking the much crucial knowledge needed in this sector,” said Shmeit.

For economic experts like Shmeit, it is advised that people weigh the risks and benefits before spending their savings in investing in the cryptocurrency market, whether through mining or trading.

Customers tend to install the type of machines based on three factors. First is the initial investment, meaning what machine they’ll buy, why and what coins they’re looking to mine. Second is the revenues made per day, and that depends on the price and type of machine brought. Third is the breakeven point.

Iskandar’s Magmamining company was established eight months ago in Beirut, but the demand he has witnessed is staggering.

He told Al-Monitor, “The demand has been surprisingly increasing in a very impressive way, and at some point we were struggling to make the supply meet the surging demand.”

In Lebanon, even mentors on cryptocurrency are becoming more popular. This is because the world of digital currency, such as bitcoin, is rapidly expanding, so building knowledge before getting into business is crucial.

“My main focus is on people in Lebanon as there are little job opportunities, so it is important to educate them more about the world of cryptocurrency while linking them with reliable international companies,” Husein told Al-Monitor.

For Husein, 50% of his clients in Lebanon resort to cryptocurrencies because they are looking for opportunities to make money in foreign currency rather than in the Lebanese pound.

The practical problems associated with crypto mining remain a barrier for some Lebanese who now find themselves under considerable pressure with Lebanon’s electricity crisis, despite investing in pricey mining machines.

Originally a computer engineer by profession, Carole Adnan Beayni was one of the many Lebanese who turned to crypto mining after the economic crisis slashed the value of her salary. She told Al-Monitor about the trouble faced by the shortage of electricity on the operation of her mining machines.

“The irregularity of the electricity in Lebanon frequently disrupted the machines, so I was demotivated to invest my money in any more rigs because capital recovery would be difficult,” Beayni said.

Beayni had to ditch bitcoin mining for bitcoin trading, as no machines are involved in the trading process.

While a growing number of people in Lebanon resort to solar panels amid the country’s worsening electricity crisis, surprisingly this trend is becoming more heightened by the rising number of crypto miners that need reliable power to operate the mining machines.

Fayyad said, “Some ‘miners’ in Lebanon have installed solar panels to generate reliable electricity to keep their mining machines on, as they couldn’t rely on the little electricity provided from the government and private generators.”

Iskandar, meanwhile, spoke more about his companys’ solution of solving the electricity issue amongst clients in Lebanon.

“It turns out that there are many people in Lebanon who are willing to sell their electricity for a certain amount of money per day,” said Iskandar.

Hence, they were able to match those people with the investors who need long hours of electricity for their mining machines.

The company is now working on their second facility by linking their customers to hotels in Lebanon who are willing to sell their electricity to miners, as they’re not at full capacity anymore.

The increasing demand for cryptocurrency mining in Lebanon has prompted many shops across the country to accept payments in USDT, which is a cryptocurrency with a value that is meant to mirror the value of the US dollar.

There are now more than 15 established companies in Lebanon offering mining machines and installation services, and this number is only expected to rise due to surging demand.