The final round: Netanyahu versus Liberman

Yisrael Beitenu leader Avigdor Liberman, by standing firm on his one condition for joining a government by Prime Minister Benjamin Netanyahu, has set the stage for what looks to be the last round in the political struggle between the two men. 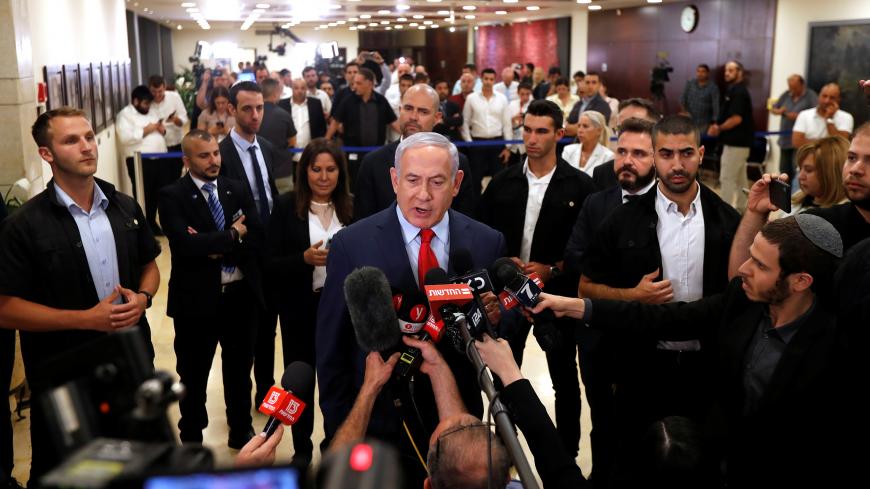 Israeli Prime Minister Benjamin Netanyahu speaks to the media at the Knesset, Jerusalem, May 30, 2019. - REUTERS/Ronen Zvulun

Nothing like this has ever happened in Israel. On May 29, Prime Minister Benjamin Netanyahu — 50 days after delivering the most enthusiastic victory speech of his career on April 10, having defeated Blue and White, headed by three former army chiefs of staff, by winning an unfathomable 35 Knesset seats — was dragged into new elections scheduled for Sept. 17. For the first time in the history of the state, two general elections will be held in the same year, in fact, less than six months apart. The 21st Knesset, elected on April 9, served barely one month before voting itself out of office on May 29. At what appeared to be the peak of Netanyahu's power, he was caught at his lowest ebb. Careening ahead at 200 miles miles an hour, he crashed head on into reality, experiencing the limits of power firsthand. Now he will have to restart his Sisyphean campaign to avoid criminal prosecution, albeit with somewhat favorable odds.

By law, Netanyahu had until the close of May 29 to form Israel’s 35th government, a task entrusted to him by President Reuven Rivlin. He will surely remember the three days before the deadline as his worst nightmare since losing the 1999 elections. Netanyahu found himself in a dizzying spin, spiraling increasingly out of control, as the hours passed. The greatest threat he faced was Rivlin entrusting another Knesset member with forming the government as the law allows. His main rival, Blue and White Chair Benny Gantz, was not his chief concern at that point. Rather, he was afraid that Rivlin might pick another Likud member for the job. Had that happened, a new government could have been assembled in minutes. Blue and White had already announced that it would join a unity government with the Likud as long as Netanyahu was out of the picture.

Netanyahu’s supreme task on May 29 was thus to stave off such an occurrence, which would have accelerated his political demise. To that end, he mobilized his entire party along with its allied ultra-Orthodox parties and Avigdor Liberman, chair of Yisrael Beitenu, to dissolve the Knesset just weeks after it was sworn in. He preferred returning to the polls rather than seeing someone else head a right-wing government. In a tremendous, last-minute push, Netanyahu managed to convince lawmakers to commit political suicide on live television in order to save himself. Knesset voting ended just shy of midnight, making new elections a fait accompli.

Netanyahu had hoped until the very last minute that he could cobble together a coalition. His people tried bribing deserters from other parties to stay away from the late-night vote and enable Netanyahu to swear in a minority government backed by 60 of the Knesset's 120 members rather than dissolve the legislature. That effort failed. No deserters or traitors were to be found in the main opposition Blue and White. The Arab Knesset members also denied Netanyahu the pleasure. All he needed was for one Arab member to stay away from the voting and allow Netanyahu to install his minority government by a vote of 60-59.

At the same time, Netanyahu’s people put out feelers with various unbelievable offers to political rivals, including to Labor Party Chair Avi Gabbay and several of the party's lawmakers. They rejected the offers. (By actually considering a proposal at some point, Gabbay probably doomed his own political fate.) Compromises of various sorts were suggested and shot down in repeated bids to placate both Liberman, who was demanding mandatory military service for ultra-Orthodox men, and the ultra-Orthodox parties, which opposed such conscription. With both sides firmly dug in, Netanyahu was unable to bring them together to form a majority coalition. Netanyahu had never been more vulnerable and more prone to intimidation than he was those last few days, and his fellow politicians sensed his weakness.

In the end, the person who led to Netanyahu's downfall was Liberman, a veteran ally with whom he had marched in lockstep since the early 1990s and who had served variously as Netanyahu's foreign and defense minister, director of his office and of the Likud. The coming months will see these two waging a bitter battle unprecedented in Israeli politics. Netanyahu, convinced that Liberman is out to destroy him, has sworn to take revenge.

Liberman likely decided in advance, even before the launch of coalition negotiations, not to join the next Netanyahu government. The determining factor was the ultra-Orthodox enlistment law, which Liberman had proposed in the last government. Liberman had declared before and after the April elections that his condition for joining Netanyahu in a government was simple: passage of the exact version of his law that the previous Knesset had approved on a first vote in July 2018. Liberman knew his demand would be a bitter pill for the ultra-Orthodox and a potential deal breaker. Knowing the ultra-Orthodox would never accept his terms, he decided to confront Netanyahu once and for all, forcing him to choose between surrendering to the ultra-Orthodox, as he always has, or acting for the good of the state. Liberman believed that such a seemingly principled stand would repair the damage his image sustained when he served as Netanyahu’s defense minister. Liberman's motto had been “I stand by my word,” but it became a joke after he said he would kill Hamas chief Ismail Haniyeh within 48 hours of taking charge of the Defense Ministry but failed to deliver when he was actually appointed to the position. Seeing a shot at redemption, he took it.

For Netanyahu, it was a cruel blow, right between the eyes. The man who won the elections had failed to form a government, a first in the 71 years of the state. Israelis now view Netanyahu as a lame duck. That he needs a loyal coalition to protect him against pending indictments — by passing amendments to laws on immunity and curbing the powers of the Supreme Court — makes him vulnerable, susceptible to intimidation and desperate. His failure to line up an alternative coalition did not help his bargaining power vis-à-vis Liberman’s obstinacy.

When May 29 ended at the stroke of midnight, Netanyahu turned on his former ally with full force. “Liberman has gone over to the left,” he asserted. His people announced that in the upcoming election campaign, Netanyahu would focus on destroying Liberman just as he had done to Naftali Bennett, his nemesis and New Right leader who shockingly failed to attract enough votes in April to enter the Knesset. The Likud, they said, would invest a fortune in appealing to immigrants from the former Soviet Union, a large chunk of Liberman’s constituency, to deny his crossing the electoral threshold.

Netanyahu’s only problem is that Liberman is not easily scared. He is by far the coldest fish in the Israeli political pond, a man who does not know the meaning of pressure and who, unlike Netanyahu, is not driven by an obsession to be prime minister. When Liberman has nothing to lose, both sides should be worried.

Netanyahu’s task is not an easy one. This time around, he will have to muster votes to win 61 Knesset seats and do it without Liberman, whose Yisrael Beitenu won five seats in April. This is yet another battle in Netanyahu’s fight for his life, with indications suggesting it might be the final round.