Netanyahu’s fate now in the hands of Liberman

Yisrael Beitenu leader Avigdor Liberman knows that he now holds the keys for Prime Minister Benjamin Netanyahu’s coalition; without him, Netanyahu does not have a majority. 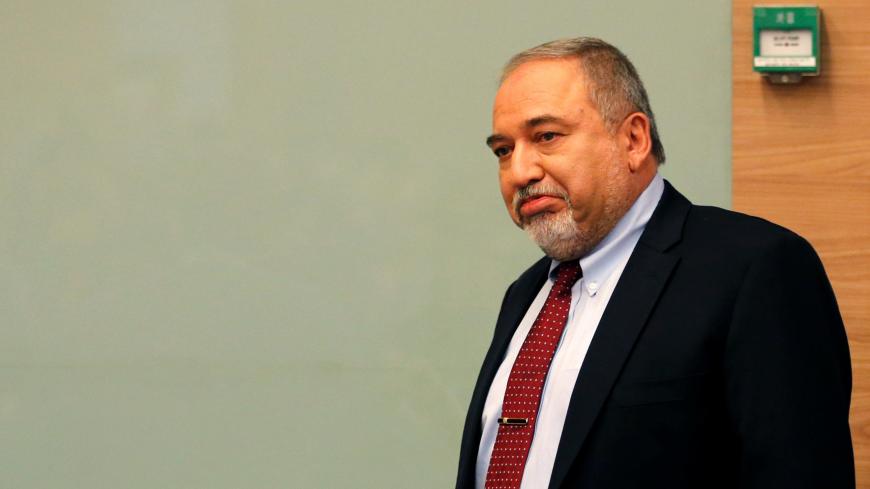 Avigdor Liberman arrives to deliver a statement to the media following a meeting of his party, Yisrael Beitenu, at the Knesset in Jerusalem, Nov. 14, 2018. Liberman, who was defense minister at the time, is in a good position to help determine Israel's next government. - REUTERS/Ammar Awad

These are most important days in the life of Yisrael Beitenu leader Avigdor Liberman, Israel’s most enigmatic politician. Liberman emigrated to Israel from the former Soviet Union at the age of 20 and, against all odds, served in the following positions: head of the prime minister’s office, national infrastructure minister, transportation minister, foreign minister and defense minister. Now he’s the one who holds the keys to Prime Minister Benjamin Netanyahu's future, perhaps even the future of the entire state.

It had seemed that Liberman had already done everything he could and that in the last two campaigns he had run out of steam and exhausted his political career. It had seemed clear that he would never break the armored glass ceiling that prevents people like him from reaching the top.

But Liberman now celebrates a tremendous personal victory: It was he, and not his rival, New Right party leader Naftali Bennett (whose new party did not cross the threshold), who was elected to the Knesset with four other legislators to become the official tiebreaker. Netanyahu cannot form a government without him. Liberman had presented his detailed political demands in advance, even before the elections, and then festively announced that he has no intentions of backtracking one iota from them. No one took him seriously. Now, everyone takes him seriously.

The most salient demand is, of course, the ultra-Orthodox draft bill (regulating exemptions from mandatory military service for yeshiva students). Liberman proclaims that if this bill — which already passed its first reading in the Knesset in July 2018 — does not pass immediately as is in the second and third readings, then he’s out. It’s that simple. But the ultra-Orthodox — mainly United Torah Judaism chairman Yaakov Litzman, who represents Israel’s largest Hassidic Gur faction — demand changes. Liberman answers a resounding "nyet" and Netanyahu is trapped in the crossfire between the sides.

At the moment, there is no government, and Liberman is the only one who is not scared about new elections. On the contrary: After long years of being consigned to the political wasteland, Liberman is now enjoying great public popularity. He took over the niche of Blue and White party member and Yesh Atid chairman Yair Lapid in one fell swoop. Liberman says the Likud allows the ultra-Orthodox to take control of the state and that in all of Jewish history, there has never been a leader like Netanyahu who gives the ultra-Orthodox everything they want. Liberman is fighting the secular-liberal wars and believes that even if the state is dragged into another round of elections, he has nothing to lose from that. Liberman enjoys a close relationship with New Right party leader Ayelet Shaked, Bennet’s unrequited former political partner, and Shaked has quite an electoral potential. With Liberman in first place and Shaked in second, they would constitute a secular, pragmatic bloc with some liberal tendencies. And that could be a real “resurrection of the dead” for those who have already been mourned and buried in Israeli politics.

Meanwhile, tens of thousands of Israelis congregated the night of May 25 in the Tel Aviv Museum square for a political demonstration organized by the people of the Blue and White, Labor and Meretz parties and a series of civic organizations. The turnout was impressive; tens of thousands of people filled up central Tel Aviv, thus increasing the pressure on Netanyahu. And this, in turn, amplified the pressure on the last remaining Knesset members from the Likud who still support the rule of law: Gideon Saar, Gilad Erdan, Avi Dichter, Yuval Steinitz and Yuli Edelstein. But the ones to suffer the most pressure are Kulanu head Moshe Kahlon and his faction, who expressly promised throughout the preceding term of office that they would oppose any personal legislation to "rescue" Netanyahu from the law.

Israel’s political system has a long history of dramas and storms, but the coming days may be the most jittery ones that Israeli politics has known in the recent era. Netanyahu must form a government by midnight May 28. Should he fail in that task, he will lose his mandate for assembling a government and the ball will return to the president’s court. President Reuven Rivlin would then conduct another round of consultations with the heads of the factions. Then he could impose the coalition-building effort on another Knesset member or announce new elections.

New elections would constitute a disaster for Netanyahu, and not only because he might not be able to reproduce his electoral achievements. New elections would mean that the prime minister’s timetable would be delayed by several long months, allowing the justice system to complete a hearing and file an indictment against him before Netanyahu could emasculate the system and secure immortal immunity.

Netanyahu and Liberman now face one another, no holds barred, cursing and accusing one another treacherously. All the other political players are asking themselves: Is this a real crisis, or a play orchestrated by true experts? Those who have passed by Netanyahu’s Balfour House recently are willing to swear that it’s all for real.

Liberman and Netanyahu have walked down Israel’s political road hand in hand since the early 1990s, almost 30 years ago. They know everything about one another. Liberman is a right-winger and has publicly declared several times that he will never do anything to enable the rise of a left-wing government. Netanyahu, however, is still convinced that Liberman will do everything to bring him down in order to enable a new generation of right-wing leaders to arise. Right-wing leaders such as Liberman himself. Nevertheless, the more reasonable assessment is that the magic formula will appear at the last minute, as always: The ultra-Orthodox won’t vote for the law and it will pass on the votes of the opposition. Or the opposing ultra-Orthodox faction (four Knesset members) will join an improvised 61-member coalition only after the law is passed.

The next few days will be fateful ones for Liberman, and for the Israeli political system, but mainly for Netanyahu. Not only for Netanyahu’s rule, but also for his personal freedom. His hearing is scheduled for Oct. 2. His race to immunity is delayed because of coalition difficulties. Netanyahu never would have believed that the people who now stand between him and his freedom were once the most faithful political allies he ever had: Avigdor Liberman on one side and Litzman on the other.

The educated guess is that the prime minister himself will pay a personal visit to the Gur rabbi (the religious leader of the Gur Hassidic court), in order to beg for his future. Will it happen, will it be successful? We’ll have a partial answer the morning of May 29.