Is Netanyahu coordinating with Trump over 'deal of the century’?

Prime Minister Benjamin Netanyahu hopes that publication of the US Mideast peace deal just after the elections would attract public attention away from an imminent indictment against him. 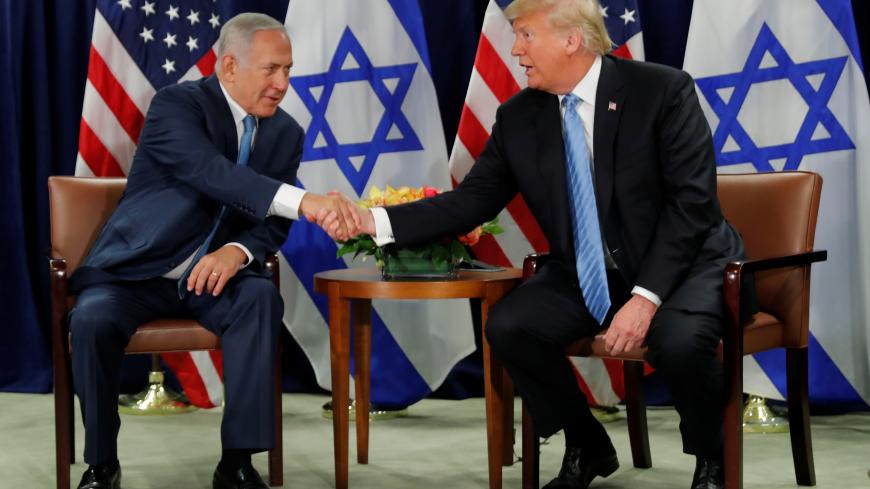 The interview given by US President Donald Trump’s senior adviser and son-in-law Jared Kushner to Sky News Arabia on Feb. 25 did not please associates of Prime Minister Benjamin Netanyahu. According to a political source who spoke with Al-Monitor on condition of anonymity, senior Cabinet members labeled it a “verbal terror attack.’’

Prior to the interview in which Kushner disclosed details from the “deal of the century” on which he has been laboring with US special envoy Jason Greenblatt over the last two years, most of Israel’s senior right-wing officials had been convinced that Netanyahu was fully coordinating with Trump on everything connected to the US peace proposal that was taking shape.

“But suddenly,” said a senior Cabinet member to Al-Monitor on condition of anonymity, “along came Kushner at the worst possible time, with the worse possible details, thus forcing Netanyahu on the defensive.”

The day after the interview, Netanyahu instructed all the ministers in his government — no exceptions — to maintain their silence and not give interviews or even address the American initiative and/or Kushner’s details. Simultaneously, as could be expected, a multi-participant squabble broke out throughout the right-wing camp over Kushner's and Netanyahu’s words. Education Minister Naftali Bennett has been trying for a while now to stop the flow of right-wing votes from his party to Netanyahu’s — exactly as happened in the 2015 elections — so this was an opportunity he could not miss. Bennett immediately announced that “Netanyahu will divide Jerusalem.” In response, Netanyahu "advised" Bennett to calm down and denied any such possibility. Bennett did not calm down and on Feb. 27 called upon Trump to publish his Mideast plan before Israeli elections.

The prime minister tried to somehow leverage even this explosive event. He hinted that just as he was able to face down President [Barack] Obama, he'll be able to do the same vis-a-vis Trump as well with regard to defending Israel’s interests — in other words, to prevent the establishment of a Palestinian state between the Jordan River and the Mediterranean Sea. It is not clear if this message has really penetrated the hard-right-wing voters who negate the two-state solution and sanctify the status quo.

Despite all of this, most of Netanyahu’s Cabinet ministers are still convinced that he is coordinating with the Americans regarding the details of the proposal taking shape and also regarding the timing of its disclosure. “He knows what’s in the offer,” a non-Likud senior minister told Al-Monitor on condition of anonymity. The minister added, “He’ll also control the timing for when it will be placed on the table. The problem is that Netanyahu did not anticipate Kushner’s interview. Turns out that there are limits to even Netanyahu’s ability to control the White House.”

Another minister, also speaking on condition of anonymity, added, “So it’s not just Netanyahu who has ‘internal needs.’ The Americans also face constraints of their own. President Trump is under heavy pressure, and he’s trying to create a global agenda and international leadership. We see this with regard to China, with regard to the meeting held with [North Korea leader] Kim [Jong-un] and also in the Middle East arena. Netanyahu learned a hard lesson this week.”

The prevailing opinion within Israel’s highest political-security ranks is that Netanyahu is completely in the US administration’s loop regarding the “deal of the century,” and that Washington and Jerusalem were supposed to present it after the elections. “The “deal of the century,” explains a high-level Israeli Cabinet member speaking with Al-Monitor on condition of anonymity, “is meant to try to extricate Netanyahu from his legal troubles. After the elections, he is supposed to take a political turn to the center and announce to the public that there is no way he can turn down the best US president that Israel ever faced in the White House." The minister added, “On this basis, he will establish a coalition based only on parties willing to say ‘yes’ to Trump, on the assumption that the Palestinians would do the work for us by again rejecting any possibility of reaching an arrangement with Israel.”

The problem is that Netanyahu is, at the moment, on an entirely different trajectory. “After the elections” is another story altogether. Now he is focused on the right, and his highest strategic-existential goal is to bring as many votes as possible to the Likud in order to signal Attorney General Avichai Mandelblit that the "nation is with Netanyahu" despite investigations, recommendations and indictments. “He is supposed to make his left-wing about-face only after stealing all the right-wing votes,” one of Netanyahu’s right-wing adversaries explained on condition of anonymity, “From this point of view, Kushner’s words — which included a mention of a restructuring of Israel’s borders — completely disrupted Netanyahu’s election strategy.”

Netanyahu’s hopes of avoiding an indictment against him by agreeing to an arrangement with the Palestinians is based on mistaken basic assumptions. Former Prime Minister Ehud Olmert found himself in a similar situation about a decade ago when he offered a generous, unprecedented Israeli peace proposal to Palestinian President Mahmoud Abbas when he Olmert was up to his neck in criminal investigations in 2008. Olmert was the dream come true of all left-wing Israelis: He had been a Herut [Likud] member from birth who went from the depths of the right to a peace-pursuing leftist who “saw the light” and agreed to go the whole nine yards for peace. But this had no effect at all on the police, the attorney general or the state attorney's office.

Netanyahu still hopes that with him, things will be different. As opposed to Olmert, Netanyahu is a popular prime minister. Many Israelis feel that only he could craft a peace agreement that would earn the confidence of the Israeli public.

On the other hand, loathing and abhorrence of Netanyahu is so deeply rooted in the Israeli center-left that even if he’d divide Jerusalem with his own hands and offer it to Abbas on a silver platter, no one would be convinced. And with all due respect to Kushner, Netanyahu’s real troubles lie in wait for him this coming weekend or at the beginning of March when Mandelblit will probably publicize his decisions regarding the prime minister’s criminal portfolios. This is a key watershed event that is expected to begin the countdown toward the end of the Netanyahu era.

The prime minister is in real trouble and under great pressure. Word circulated Feb. 26 that the attorney general was deliberating about submitting his decisions Feb. 28. Netanyahu was on his way to the airport, ready to take off for an important meeting with Russian President Vladimir Putin. At first, he considered lengthening his stay in Moscow, thus forcing Mandelblit to delay the dissemination of his decision. Afterward, he understood that shenanigans of this type would only harm him. Thus, the prime minister decided to shorten his visit to the minimum and return to Israel on Feb. 27 in order to prepare for what awaits him on Feb. 28.

Netanyahu is lagging behind the Blue and White Party in the polls. In Mandelblit’s office, Netanyahu is expected to be slapped with an indictment of bribery. One way or the other, Prime Minister Benjamin Netanyahu is fighting against all odds.