Netanyahu fights for his political life

Following the attorney general's announcement that he will be indicted, Prime Minister Benjamin Netanyahu has stepped up his desperate war against the legal system and the media. 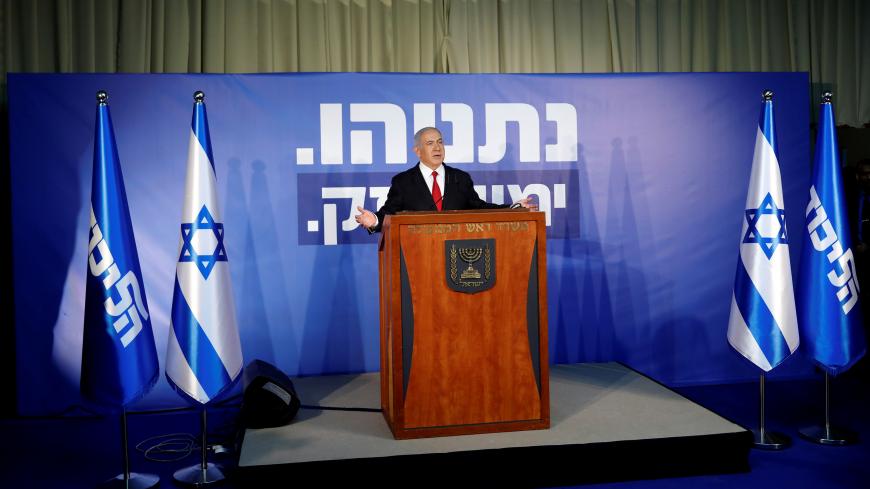 Israeli Prime Minister Benjamin Netanyahu delivers a statement to the media in his residence in Jerusalem, Feb. 28, 2019. - REUTERS/ Ronen Zvulun

For the first time in the history of Israel, the country’s top law enforcement officer has decided to indict the man at its helm. On Feb. 28, following a complex investigation spanning more than two years, Attorney General Avichai Mandelblit announced that he had decided to serve Prime Minister Benjamin Netanyahu, for whom he had worked as cabinet secretary, with three criminal indictments. In Case 4000, concerning ties between Netanyahu and communication tycoon Shaul Elovitch, he’ll be charged with bribery, and in Case 1000 and Case 2000 concerning benefits received from wealthy businessmen and the positive media coverage, he’ll be charged with fraud and breach of trust.

Netanyahu's official indictment is now pending a hearing. His supporters are latching onto the word “hearing,” telling themselves that everything could still turn around and Mandelblit’s decision is not final. In fact, Mandelblit is highly unlikely to change his mind after Netanyahu and his lawyers respond to the suspicions laid out in detail over 57 pages. He took every possible precaution and raised the evidentiary bar to unprecedented heights before making his decision. He played it safe, cutting Netanyahu extensive slack. That Mandelblit went ahead and issued his recommendation to indict Netanyahu despite intense pressure to hold off until after the upcoming Knesset elections on April 9 attests to his confidence in the outcome.

Israel is in the throes of a series of earthquakes. The first struck on Feb. 21, when Yesh Atid and Israel Resilience united to form the Blue and White Party. Two other former army chiefs — Moshe Ya’alon and Gabi Ashkenazi — joined them in a bid to form a credible threat against Netanyahu. For the first time in ages, Netanyahu found himself lagging in the polls. The second tremblor — the long-awaited announcement — was the more powerful and its aftershocks continue. The third will take place when Israelis go to the polls on April 9. It will be followed by the winner’s efforts to form a coalition government, and then by Netanyahu’s hearing. A decision by a beleaguered Netanyahu to quit politics while he stands trial on charges of bribery would be the ultimate quake, the perfect storm about which we have been talking for several years, ending the Netanyahu era in Israeli politics. Will it end before or after Netanyahu breaks the record this summer as Israel’s longest consecutive serving prime minister? Right now, no one knows.

Netanyahu is in the fight of his life, waging simultaneous battles on three fronts. The legal front is the most threatening and has the most destructive potential: Netanyahu must have finally realized that his career could end like that of his predecessor Ehud Olmert — in jail.

The second front, the political one, consists of two parts. One is Netanyahu’s desperate attempt to win the elections against all odds, knowing that a loss would increase his prospects of ending up in jail. It would be far easier to wage a legal battle from the prime minister’s office, from which he could seek a cushy plea agreement without jail time and dictate the terms and the pace of the proceedings. A private citizen, however, is at the mercy of the system, as Olmert was.

The other part of the political front involves Netanyahu’s efforts to ensure a future coalition. An electoral victory will be meaningless if he is unable to form a government, making Netanyahu more dependent than ever on his coalition partners. Most delivered the goods this week, pledging to stick by Netanyahu even now and promising to recommend him to the president as Israel’s next premier and to refuse to join Gantz if he wins.

However, Netanyahu would find himself at their mercy, needing every single one of their votes to form a government while charged with bribery. The support of the ultra-Orthodox parties is a given, and the head of the Yisrael Beitenu, Avigdor Liberman, has pledged his allegiance. Trouble could come from the heads of the New Right party, Education Minister Naftali Bennett and Justice Minister Ayelet Shaked, as well as from Finance Minister Moshe Kahlon’s center-right Kulanu. Kahlon has declared he would recommend Netanyahu to the president, but is also on record as saying he would refuse to remain in the government of a prime minister under indictment. Bennett and Shaked have left the issue up in the air. The watershed moment for these two parties will likely occur after Netanyahu’s hearing, late this year or early next year. An official indictment would sink Netanyahu’s political career.

Netanyahu’s third front is diplomatic. Even as his legal woes are mounting, his ally President Donald Trump is nearing the unveiling of his plan for Middle East peace. The plan could be Netanyahu’s undoing or his salvation; it all depends on the timing. Right now, Netanyahu is in a desperate bid to mobilize right-wing voters and he cannot afford to be perceived as inclined to accept a plan designed to establish a Palestinian state. That could change after the elections if he wins.

The most crucial question now is how the decision will affect the broad public support Netanyahu enjoys. Will voters from his staunch political base defect and cost his Likud a loss of four to six Knesset seats, as pollsters and pundits predict? Could it go the other way, with the move to indict him boosting Netanyahu’s popularity? Netanyahu is fighting back like a wounded animal. Less than an hour after Mandelblit’s decision was announced, Netanyahu delivered a scathing response from his Jerusalem residence with a broadside against the police, the state prosecution, the rule of law and, of course, the left. Netanyahu is ignoring facts, evidence and testimonies, creating an alternative scenario based on conspiracy theories, lies and bursts of fury against the gatekeepers and institutions of the state he heads.

For the first time in public, he specifically accused State Prosecutor Shai Nitzan and the chief prosecutor in his case, Liat Ben-Ari, of plotting against him in the service of his political rivals. Netanyahu hopes to convince his supporters that he is the target of a political hit. The Likud is on board, producing videos in support of this angle and flooding social media before and after every news item. Netanyahu will fight to the last bullet.

Minutes after Netanyahu’s nationally televised speech, it was Gantz' turn as leader of the Blue and White alliance. Gantz took the podium to deliver a calm, dignified response, even flattering Netanyahu. “This country … is also dear to you,” the nation’s one-time top soldier told his former boss. However, “Given the circumstances that have been created, sitting together with Benjamin Netanyahu is not an option,” he added. Gantz urged Netanyahu to take a deep breath, display responsibility to the nation and quit. The speech was meticulously crafted. Gantz was deferential, even warm, with the aim of drawing moderate Likud supporters to his party.

Gantz is not the only one counting on Likud defections. A brawl is underway within the right-wing camp over voters ostensibly disillusioned with Netanyahu after the announcement. Participants in the melee include Bennett and Shaked, Kahlon and Liberman. In recent weeks, each of their parties has crowned itself as the sane, responsible or pragmatic right. Liberman, Bennett and Kahlon are trying to sell themselves as Netanyahu but without the corruption. On April 10, we will know whether they were successful.