Israeli Prime Minister Benjamin Netanyahu already started explaining why he has no intention of quitting if police recommend his indictment. 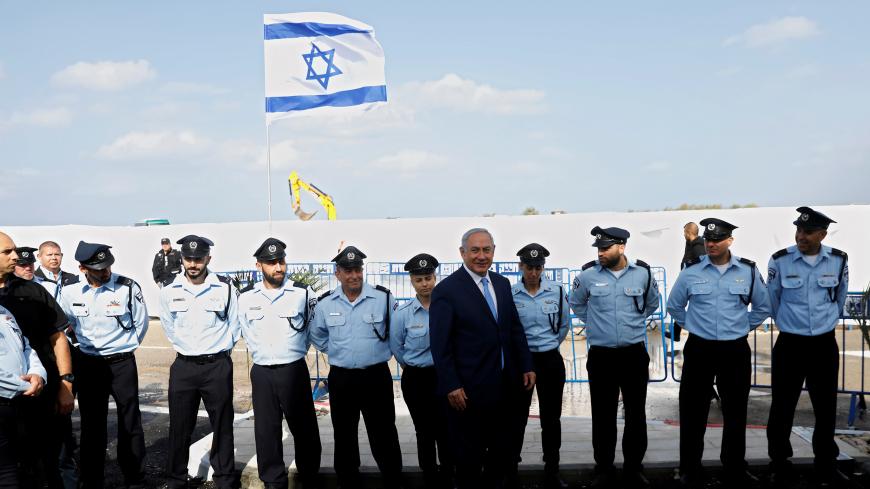 Israeli Prime Minister Benjamin Netanyahu’s “Hanukkah speech” to Likud members Dec. 19 was the meticulously planned opening shot of the last stretch in the battle for his political life.

Since he returned to the prime minister’s office in 2009, Netanyahu has convened two large political conventions of Likud members every year: on Rosh Hashanah (Jewish New Year) and Passover. His decision this year to gather Likud members on the last night of Hanukkah, a few weeks before the police are projected to recommend his indictment on the basis of bribery, was meant to get him to that moment as strong as he can be politically.

The commentary regarding a scared prime minister who unleashes unprecedented attacks on the police misses Netanyahu’s state of mind, as well as that of most Likud members, especially after his Hanukkah speech.

Netanyahu labored over this speech for several long days with one goal in mind: to render the expected police recommendation insignificant in public and political discourse. Netanyahu, as he said, released a “spoiler” to the police recommendation when he described what is about to happen: “The denouncers in the town squares and the headlines will try to blow up this balloon before all the air comes out. Now they’re trying to build tension: What will happen with the recommendations? I’ll give you a spoiler. In a few weeks, correspondents and analysts will sit in the television studios and begin the news broadcast with bombastic headlines: serious recommendations, we could say very serious, we could say some of the most serious in our nation’s history.”

The last sentence was delivered in a mocking impersonation of the veteran analyst on police affairs at Channel 2 news, Moshe Nussbaum. There’s no doubt that of all his speeches as prime minister in all his terms, the “Hanukkah speech” has broken all the rules of decorum. Netanyahu, fighting not only for his political life and his innocence, but also for his legacy, is like a predator, a politician and campaigner without rival.

The speech embodies the strategy of the prime minister, who understands that the embarrassing details of the recommendation to indict will soon be revealed and will show him indisputably as having regularly taken bribes.

Thus, what Netanyahu did Dec. 19 in front of a sympathetic home audience was to neutralize in advance the tough headlines, which could instantly dismantle his government and drag him to an election. The last thing he’s interested in right now is the decorum of acting as the prime minister of everyone. Netanyahu’s goal, which he seems to have achieved, is to arrive at the explosive moment that is coming with the backing of the Likud movement, ministers, members of the Knesset and that of a key figure, Finance Minister Moshe Kahlon.

In his speech, Netanyahu actually explained why he doesn’t intend to resign from his position following the police recommendations, which he said were leaked a year ago and most of which “were tossed in the garbage.” He even prepared public opinion for his intention to once again run for prime minister, even with a recommendation to indict on charges of bribery hanging over his head.

In doing so, Netanyahu is skipping over in advance the political land mine waiting for him in several short weeks. When it comes to Likud supporters and senior members of his party, he can rest assured. Not one of his potential “successors” will call on him to resign, as occurred with Prime Minister Ehud Olmert's Kadima Party members in 2008 — a move that pushed Olmert into a corner.

No Likud leader has spoken out against Netanyahu’s attacks on the police, not even Minister of Public Security Gilad Erdan, who was conspicuously absent from the Hanukkah event. Erdan only said after the speech that "some of the things he said are justified … but I am not all right with all his statements.” In contrast, Ministers Yisrael Katz, Ofir Akunis, Miri Regev, Haim Katz, Yariv Levin, Yuval Steinitz and Zeev Elkin showed up. As it looks now, even among his coalition partners, no one is expected to call on him to resign. Certainly not Chairman of Shas Aryeh Deri, who is also under investigation for bribery, or Minister of Education Naftali Bennett and Minister of Defense Avigdor Liberman — both of whom have signaled their red line: They could live with police recommendations. None of them would take it upon themselves to dismantle a right-wing government, certainly not Bennett, who sees himself as Netanyahu’s successor as leader of the camp.

Remaining in the field is Kahlon, the chairman of Kulanu who once again finds himself caught in the trap of his life. Like the other heads of coalition parties, Kahlon also does not want an early election and will do everything to hold on to the governing coalition. Despite this, he is a hazard as far as Netanyahu is concerned, since most public pressure will be directed at Kahlon, as many of his voters are “anti-Netanyahu” and since he presents himself as a “defender of the rule of law.”

In his speech, Netanyahu provided ammunition for Kahlon for the day the police recommend indicting him and he will be pressured to resign from the government. Thus, Netanyahu emphasized and will emphasize again that he is granted the presumption of innocence, and he will continue to claim that police recommendations in most cases result in cases being closed and that the police have decided his fate in a hunting expedition against him in order to depose him and the right-wing government.

Thus the year 2018 will be politically decided by two people: Kahlon and Attorney General Avichai Mandelblit. As long as Netanyahu gets past the obstacle of Kahlon, his political and public fate will be determined by Mandelblit, who will study the police recommendation and decide whether to indict the prime minister and on what charge: bribery or breach of trust. Mandelblit is expected to study the police materials for many months before he decides on the issue. During this time Netanyahu can continue to serve as prime minister, as long as he remains politically strong and stable.

According to the responses in the Likud, Netanyahu’s Hanukkah speech achieved its goal. This could be felt in the party’s WhatsApp groups. However, the most exact barometer for Netanyahu’s strength in the Likud is the silence of senior members and their stance alongside him, even if not in words. They will be the first to know when Netanyahu starts to lose his grip on the Likud and the right, and they will act accordingly.