The Israeli police's recommendation to indict Prime Minister Benjamin Netanyahu and his wife for taking bribes in the so-called Case 4000 could lead to several dramatic possibilities for the people of Israel. 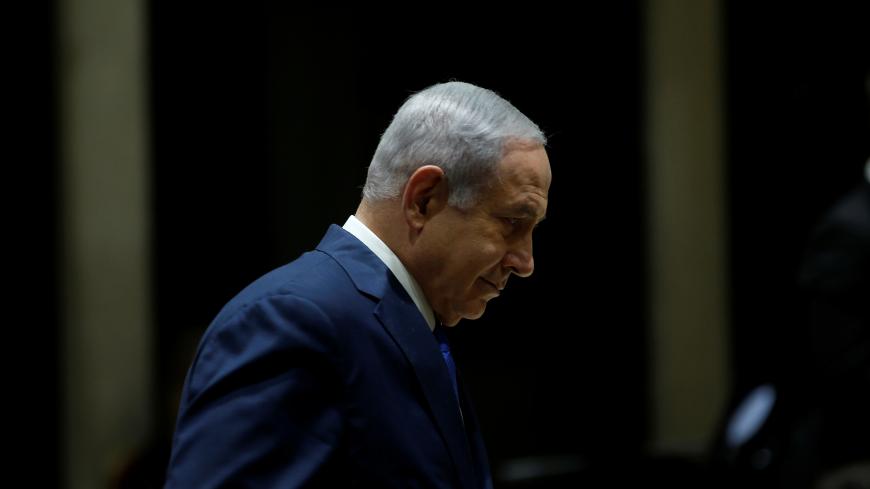 In the coming weeks, Netanyahu will have to make the most important decision in his life. Since he has never really fought for peace but limited himself to maintaining the status quo, his upcoming decision will be a dramatic one; it will determine the way in which the Netanyahu era will come to an end, if indeed it does end. Will he drag Israel into a state of internal chaos? Or will he relax his grip on power and instead try to extricate himself from the imbroglio with minimum damage to all the parties involved? Will Netanyahu try to continue to serve as prime minister during the trial, or will he direct his efforts at a plea bargain?

Anyone who knows Netanyahu knows that he is not capable of giving up or admitting defeat. His nature is to fight to the last bullet, to burn down the house and incite his own people against each other. On the other hand, there is a chance that Netanyahu will at some point understand his situation and realize that he might end his career like former Prime Minister Ehud Olmert: in a prison cell. Perhaps it’s not too late for him to make a deal with the attorney general that will put an end to his political life but extricate him and his wife from imprisonment.

On Dec. 2, Roni Alsheikh’s last day as police commissioner, the police submitted its summation on Case 4000, recommending that Netanyahu and his wife be indicted for bribery and shaking up Israel’s political and legal system. This is the third recommendation against Netanyahu (similar recommendations were made public on Cases 1000 and 2000 as well), but the current dossier is the strongest of them all. The Case 4000 recommendation is backed by solid evidence including tapes, text messages and includes suspicion of attempting to disrupt legal proceedings. It is also the first recommendation that connects the prime minister’s wife to a bribery offense, which is much more serious than her misdemeanor indictment of several months ago. The Hanukkah festival has only started and the Netanyahus find themselves trapped in their harshest circumstances yet.

Outwardly, Netanyahu continues to claim, “There will be nothing because there is nothing.” But on Nov. 29, he enlarged his already extensive battery of lawyers for the third time. The police recommendations include a chapter on attempts to tamper with evidence in which Nir Hefetz is involved. Hefetz had been a close associate of the Netanyahus and their personal spokesman. The police allegedly have evidence that directly connects Netanyahu to bribery from former billionaire Shaul Elovitch. Elovitch ran the popular Walla! website, but needed regulatory assistance worth billions of dollars from the communications minister.

The communications minister at the time was Netanyahu himself, all according to plan. Now it is already clear that Netanyahu’s incurable obsession for absolute control of the Israeli media is what instigated the current wave of investigations and recommendations that threaten to destroy his career. Not only did he take the media portfolio for himself, but he also made all of his coalition partners sign a clause that gave him the exclusive right to make final decisions on all media issues. His partners — ministers Moshe Kahlon, Naftali Bennett, Aryeh Deri and Yaakov Litzman — all signed on the dotted line. They were more interested in government portfolios, budgets, stimulus money, the cabinet and public resources. They left the media to Netanyahu; it was his shtick. They didn’t know at that stage that the media playground would become the prime minister’s political grave. In a sense, they are party to the crime.

Currently, there are three possibilities for the future: The first is Netanyahu’s dream scenario, in which Mandelblit continues to deliberate, lengthens the procedure, adds more prosecutors to the Netanyahu dossier staff and ultimately decide to close the cases without an indictment. Under such circumstances, Netanyahu would again emerge a great victor. He could claim, as he did after another investigation against him was closed in 2000, that he suffered ongoing persecution, even a coup attempt. It could turn him into Israel’s version of Turkish President Recep Tayyip Erdogan. The sky would be the limit. But the odds that things will go this way are low: perhaps 10%, maximum15%.

The second possibility is Netanyahu’s nightmare: The attorney general speeds up the proceedings and announces an indictment against the prime minister on charges of bribery, at least with regard to one dossier (presumably Case 4000), and other minor indictments (fraud and breach of trust) on additional files (probably Case 1000). Netanyahu would have little chance of continuing to serve as prime minister in the course of a bribery trial. True, there is no specific Israeli law that addresses this situation but it has never happened before in the history of the State of Israel and the High Court of Justice will never allow it. Of course, that doesn’t mean that Netanyahu wouldn’t try his hardest to make it happen.

This second scenario has probably the highest chances. There are no legal experts in Israel who truly think that the stockpile of charges against Netanyahu could be dismissed without an indictment. The vast majority of experts hold that Case 4000 constitutes a clear case of bribery. Mandelblit will face sharp criticism if his decision runs counter to the spirit of the police recommendations, which are also supported by the attorney Mandelblit’s office assigned to accompany the investigators. Mandelblit conducted the investigation from up close, authorized each action taken and is aware of all the materials. At the moment, this situation seems to be a 50% likelihood.

The third possibility is a middle-of-the-road option: Mandelblit submits a “thin” indictment against Netanyahu that does not include bribery (a heavy crime in Israel that would prevent the person from holding elected office, at least for some years). Such a situation would be the most dangerous for the Israeli public, because it would allow Netanyahu to conduct a stubborn, house-to-house rearguard fight while continuing to incite against the police. He might even find other entities to attack later on. Netanyahu is still a very popular prime minister with a solid standing in the polls and a right-wing electorate that believes his version of the events: According to Netanyahu, the charges against him are an illegitimate attempt to overthrow the government. Netanyahu’s followers will stick with their leader through hell or high water. Unfortunately, it will probably be hell.

Often in Israel, the scenario that plays out is one that no one could have predicted. One way or the other, this saga has crossed an additional milestone, a significant breakthrough. Now everything rests on the shoulders of Mandelblit, who was once Netanyahu’s cabinet secretary. And as far as Mandelblit is concerned, the nightmare scenario has already arrived.