The recent Regional Security Dialogue in Tehran is an indication that Iran sees security multilateralism as a mechanism to confront US pressure and maintain the regional balance of power in its favor. 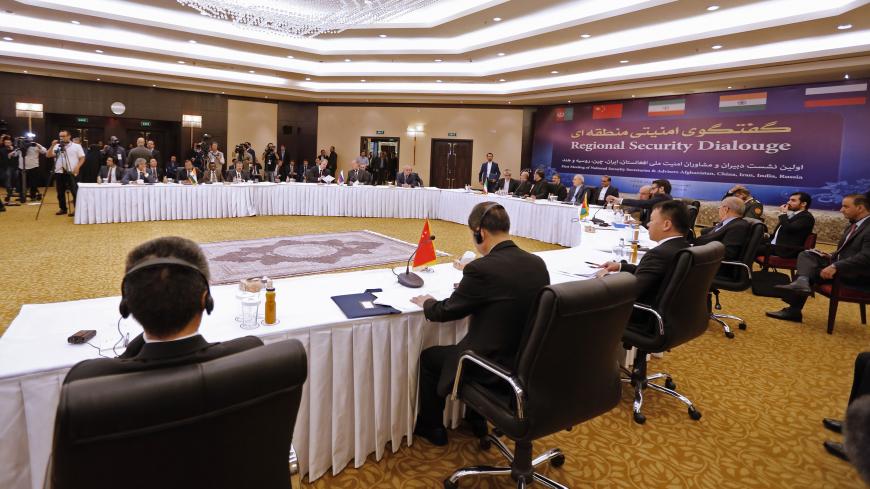 Tehran hosted national security and deputy national security advisers from China, India, Russia and Afghanistan on Sept. 26, in what was billed as the first Regional Security Dialogue. According to Keyvan Khosravi, spokesman for the Iranian Supreme National Security Council, the one-day meeting, initiated by Iran, primarily aimed at “finding joint measures for fighting terrorism and preventing its spread to Central Asia, with a focus on Afghanistan.” The final communique, however, suggested a broader agenda than just Afghanistan.

Also included were efforts ranging from fighting the Islamic State (IS) in Syria to promoting trade and economic cooperation among the parties. It was also announced that the participants had agreed to establish a secretariat and to hold annual meetings at the same level on a rotating basis. As such, it could be said that Iran’s initiative has already been successful in forming a new multilateral framework, at least at the official level.

After taking a closer look at the agreements reached at the gathering, especially with regard to the broader regional and international framework of the dialogue, one could reasonably argue that the initiative reflects Iran’s changing perspective on the issue of regionalism as well as a new outlook on its relations with China and Russia.

Of note, the lineup of who was invited to the meeting suggests that Iran is in the process of re-implementing its Look East approach to foreign policy in a wholly upgraded format. Look East, originally Iran’s foreign policy orientation during Mahmoud Ahmadinejad’s presidency (2005-13), aimed at consolidating Tehran’s ties with non-Western countries to escape the isolation resulting from its ever-deteriorating relations with European nations. With even China and Russia, the two most important non-Western powers, also demonstrating reluctance to support Iranian positions in a meaningful way, however, Ahmadinejad ultimately ended up with only a handful of Latin American and African partners.

Now, it seems that while continuing to work with the European Union to keep the 2015 nuclear deal alive and find ways to circumvent the new wave of US sanctions, Iran is developing a more targeted Look East approach, trying to strengthen its ties with the “Eastern powers,” not necessarily any state with an anti-US orientation. In fact, except for Afghanistan, which seems to have been included in the Tehran meeting because it was the main topic of discussion, the other three parties are theoretically “rising powers,” with the aim and ability to take independent stances in the international arena. As in the case of relations with the EU, Iran’s new eastward-looking orientation appears to concern its desire to withstand increasing US pressure. This alone, however, does not explain the whole story.

At the regional level, it seems that the success of the Astana framework in bringing real change to the Syrian situation in a way that meshes with Iran’s basic interests has led Tehran to the conclusion that “security multilateralism” could be an effective way to overcome the most-pressing regional issues while legitimizing Iran’s regional role and influence. In fact, the Astana agreements have not only led to a step-by-step recapturing of Syrian territory by President Bashar al-Assad’s government, but have also legitimized Iran’s presence in the country via the “de-escalation zones” agreement endorsed by the United Nations. The framework has also led to a greater degree of cooperation among Iran, Russia and Turkey.

Iran apparently adopted the same approach in developing the Regional Security Dialogue initiative — that is, choosing Afghanistan as an urgent regional security issue and then expanding the framework into a more comprehensive multilateral format. At the same time, this new security initiative can be seen as a balancing act to counter the enhanced military and security cooperation between the Arab states and the United States, widely viewed as an attempt to form an anti-Iran regional coalition. In other words, after the Arab states rebuffed Tehran’s idea of establishing a Regional Dialogue Forum and at the same time began working with the United States to form the Middle East Strategic Alliance, “Arab NATO,” Iran devised an alternative format to avoid being sidelined in regional dynamics and to counterbalance Washington’s regional role.

At the bilateral level, the Regional Security Dialogue is telling about the unique status of China and Russia in Iran’s new Look East approach. Article 9 of the meeting’s final communique calls for developing trade and transit ties, which is an interesting bullet point in a security framework. In fact, Iran is trying to preserve its own security as well as its regional influence by tying these issues to the role of Beijing in light of China’s growing presence in the Middle East via trade and transport projects, especially its ambitious Belt and Road Initiative. In other words, Iran expects China’s involvement in the Middle East to grow in parallel with enhanced security activism by Beijing as it moves to protect its economic interests. Thus, a cooperative stance by Tehran toward Beijing’s plans would make China a security partner for Iran in the region.

As for Russia, that Moscow is signaling an openness toward cooperation with Iran in preserving security in Central Asia — a region Moscow has always defined as its exclusive zone of security influence — is a sign of developing Iranian-Russian relations, thanks primarily to their close partnership in Syria. Meanwhile, article 5 of the final communique clearly supports Iranian-Russian actions against terrorism in Syria, an important international endorsement to their cooperation in that country.

All in all, the Regional Security Dialogue meeting was an indication that Iran sees security multilateralism as a mechanism for maintaining the regional balance of power in its favor as well as a way to effectively confront US pressure by deepening ties with Eastern powers. This was just the first step on a complex path. Tehran’s ultimate success heavily depends on how effectively and seriously the agreements on paper can be translated into actual measures on the ground.