Despite their differences on Syria, Russia needs a stronger Iran as its partner. 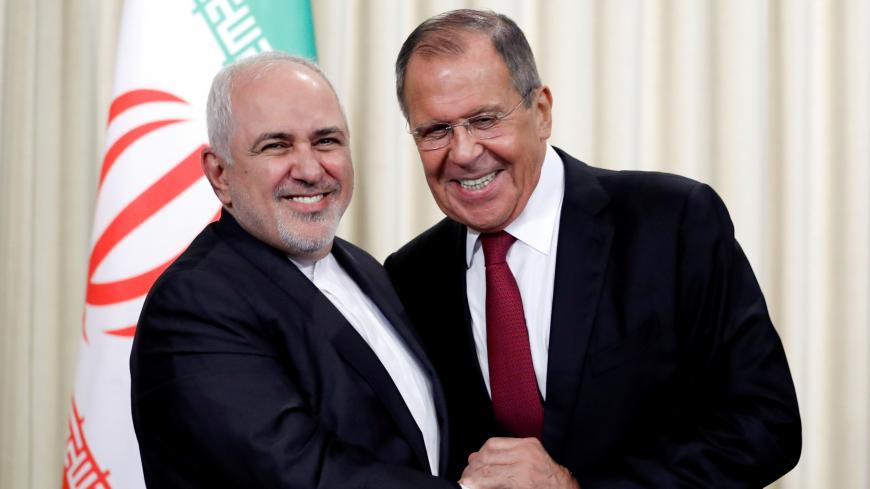 Iran has halted implementation of its commitments related to nuclear research and development under the 2015 nuclear deal. The move followed Iranian Foreign Minister Mohammad Javad Zarif’s trip to Moscow as part of his tour to rally support for the crumbling Joint Comprehensive Plan of Action (JCPOA).

The rhetoric from Russian Foreign Minister Sergey Lavrov replicated the style of his previous meeting with Zarif in May in Moscow. Both characterized US sanctions as “unilateral illegitimate restrictions” and reemphasized the need to protect bilateral economic projects in the face of continued American dominance in world trade. The two also said countries that are not sanctioned by the United States understand the “abnormality of Washington imposing its unilateral decisions.”

The interim agreement on the free trade zone between Iran and the Russia-led Eurasian Economic Union was also mentioned as a positive factor for bilateral economic ties.

Why it matters: It’s often argued that Russia is the main beneficiary of the US withdrawal from the JCPOA: While Washington and Tehran are at each other throats, the argument goes, Moscow is picking up the low-hanging political and other fruits. Nonetheless, ever since the Kremlin decided to launch the military campaign in Syria, Russia and Iran have been forging all types of ties. The Trump decision to pull out from the nuclear deal didn’t reverse this trend. To further build this image of being a powerful nation able to construct an alternative to the West-centered world order, Russia needs to see its Iranian partner strong, not weakened.

Russia made an important move when it signed a memorandum on expanding military cooperation with Iran, including military exercises in the Strait of Hormuz. This happened amid the drama of the Gibraltar authorities seizing the Iranian oil tanker Grace 1 and Iran detaining British-flagged Stena Impero, and following two sabotage incidents against the UAE and Saudi tankers in May and June. As one of the immediate products of this cooperation, Lavrov and Zarif said joint Iranian-Russian military drills in the Indian Ocean are to be held soon.

Strategically, both Iran and Russia now have their own initiatives on maintaining security in Persian Gulf, which they themselves say are very similar to one another, and are urging regional actors to have a direct interaction on the matter. Despite the differences Russia and Iran have on Syria and its post-conflict restoration, both are still a backbone of the Astana negotiations, the next round of which is scheduled in mid-September in Ankara, Turkey.

Iranian-Russian oil competition: One reason some say Moscow might tacitly exult at Tehran’s misfortunes is that Russia sees Iran as a competitor in the oil and gas market. Even if all the restrictions were withdrawn from the Iranian oil and gas sectors, as well as its financial sector, experts in Moscow think it will require a significant investment over time for Iran to become a real competitor of Russia in the European market.

Moreover, in terms of geography, Iran has been strongly oriented toward Asian markets. A new version of the proposed Iran-Pakistan-India gas pipeline is being negotiated and awaiting a memorandum to be signed with India. The idea of this project has been discussed since 1996, with its first version being initiated by the construction and opening ceremony of the 900-kilometer (560-mile) Iranian part of the pipeline in 2008. However, Pakistan did not build its pipeline section. In February, Russia's Gazprom signed a memorandum with the Pakistani Inter State Gas Systems for an underwater pipeline; even though the project might not be among Gazprom’s priorities, Russia prudently keeps an eye on developments in that area.

Also, Moscow and Tehran are implementing an “oil-for-goods” program, with Iran supplying Russia 100,000 barrels per day. Recently Moscow suggested that Tehran use the Volga-Don Canal and Crimean ports for oil transit instead of the now-problematic Suez Canal.

What’s next? The two are cooperating strategically and economically in the vein of counteracting the sanctions and promoting their alternative vision for the balance in world system. And even though the bilateral trade turnover remains quite insignificant, there are signs that things might change, especially with Iran’s non-oil exports exceeding oil revenue for the first time in decades, and the understanding of the need to diversify the economy even more.

So despite all the talks over Russian and Iranian divisions, the simultaneous imposition of various sanctions on both Russia and Iran by the United States might be, at a certain level, to Moscow and Tehran's benefit; this, of course, does not mean they would have been worse off without the outside pressure.