Russia’s long-term energy plan relies heavily on gas sectors in the Middle East and Eurasia as it struggles with low prices and sanctions. 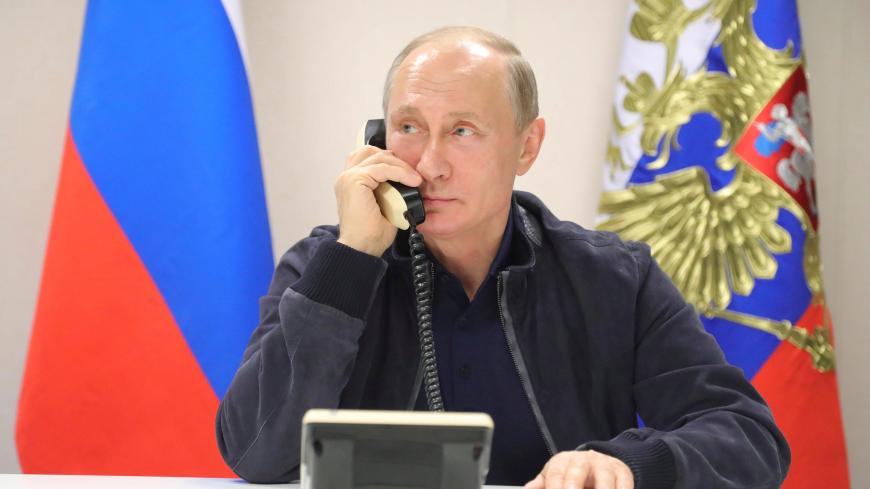 Russian President Vladimir Putin speaks over the phone with Turkish President Recep Tayyip Erdogan while he inspects the work on the Turkish Stream gas pipeline project aboard the Pioneering Spirit pipeline-laying ship in the Black Sea near Anapa, Russia, June 23, 2017. - Sputnik/Mikhail Klimentyev/Kremlin via REUTERS

As the Saudi-led sanctions against Qatar raise concerns about liquefied natural gas (LNG) export prospects, Russia is weighing its options. The Middle East is key to Russia’s Energy Strategy to 2030, adopted in 2009. The document calls not only for Russia to diversify its gas exports to decrease dependence on European consumers, but to create a Eurasian gas-trading network under Russian control.

The Qatar crisis, which began in early June, amends Russia’s approach to accessing the Middle East gas market. On the one hand, the Kremlin is trying to distance itself from the Saudi-Qatari rift, as picking sides might harm Russia’s relations with either party. On the other hand, Russian authorities are trying to flirt with both sides so they will continue to cooperate with Moscow in the oil and gas sphere.

Iran is another important component for Russia in this respect. In May, Russia’s energy behemoth Gazprom reaffirmed its interest in helping Iran build its first LNG plant. The project would involve gas delivery from Iran to India and possibly, eventually, to Laos and Cambodia.

Gazprom’s management also doesn’t rule out participating in construction of an Iran-Pakistan-India gas pipeline — which might imply Gazprom’s involvement in developing the Iranian gas fields necessary to feed it.

Although the company’s representatives make it clear that Gazprom is only discussing such prospects and the final decision will be made only after technical and economic assessments, analysts have already raised questions regarding the projects’ feasibility. Indeed, at the current stage, existing political, economic and administrative risks don’t justify the volume of investments necessary to implement these projects, not to mention that the Russian company might not be technically ready to help Iran: Gazprom itself does not have full access to LNG technology and the company is still doing the necessary research to gain it.

In other words, experts Al-Monitor interviewed have doubts that, in the short term, Gazprom would be able to accomplish the projects even if it decided to participate in them.

However, neither Gazprom nor Russian authorities plan their actions in Iran from a short-term perspective. On the contrary, their actions in the region are determined by the long-term strategy of Russian oil and gas sector development that sets Moscow’s priorities in this field until 2030. According to the strategy, Russia’s foreign policy on ensuring the security and profitability of Russian gas corporations is supposed to be relatively aggressive and expansionist. Moreover, Moscow’s ultimate goals should be to preserve the Russian gas corporations’ presence in the European market and the manifold increase in Russian gas exports to Asia and the Middle East. Russia expects to achieve these aims not only by raising the output of domestic gas fields, but also by participating in the energy sectors of other countries (both hydrocarbon producers and consumers) and establishing Russian influence over most of Eurasia’s gas transportation infrastructure.

Gazprom isn’t the only Russian company trying to enter the Middle East gas sector. Other Russian giants such as Lukoil and Rosneft are present in the region. In late 2016, Rosneft said it was purchasing a 30% share in Egypt’s Zohr gas field from Italy’s Eni SpA. It also signed a contract to supply LNG to Egypt, and 10 shipments are expected in 2017. This year, Rosneft started negotiations to export LNG to Kuwait.

Russia’s interest in the Middle East gas sector is at least threefold.

First, Russia sees the region as both a consumer market and a potentially promising region for gas industry development. Russian gas companies pay special attention to the Persian Gulf and the Indian Ocean areas. Russia’s interest in the Gulf Cooperation Council market is largely explained by growing domestic demand for natural gas among the Gulf monarchies, partly boosted by their economic diversification programs to replace domestic consumption of oil with gas.

In 2016, Gazprom and Bahrain National Oil and Gas Authority agreed to strengthen their cooperation in producing and distributing LNG. In April, Russia intensified its contacts with Bahrain, which resulted in the latter's inviting Gazprom to join a number of oil and gas projects. Also in April, a Rosneft delegation visited Bahrain, presumably to discuss possibilities for Rosneft to participate in building Bahrain’s LNG-receiving infrastructure.

Second, if Russian companies could obtain access to Middle Eastern resources, that would strengthen Russia’s presence in other regions’ energy markets, either via swap deals with Middle Eastern producers or by providing Russian energy majors with additional gas resources for re-export. Consequently, Russia is developing the local capacities for LNG production and export. This is especially the background behind Russia’s approach to Iran, Oman and Bahrain. Moscow obviously believes that if it becomes involved in these projects it can use the regional infrastructure to reach gas markets in India, Pakistan, South Asia and Southeast Asia. That’s one rationale behind Gazprom’s interest in LNG projects in Iran, although Tehran will hardly be able to build the LNG factory and provide it with the necessary gas volume anytime soon.

It might not be a coincidence that Russian conglomerate Rostec is currently negotiating its participation in the construction and subsequent management of the so-called “North-South” gas pipeline in Pakistan, which would connect LNG-receiving facilities in Karachi and Gwadar with power plants and factories in Lahore. According to the Russian side, the project is almost ready to begin construction, but Rostec has not yet reached agreement with Islamabad on the fees Pakistan would pay to use the pipeline. However, Moscow hopes to reach an agreement soon, and that’s when it would need Iran: Natural gas for this pipeline might be supplied by Russian traders via potential swap operations with Iranian gas if Tehran builds the necessary infrastructure.

Finally, Middle East hydrocarbon exporters are challenging Russia’s positions in the energy market. Iran has never hidden its intention to compete with Russia as a gas supplier to Europe. Al-Monitor has already discussed the way Moscow is reacting to this challenge, which is only a concept now, but may become very real down the road.

It will not be easy for Russian energy companies to enter the Middle East and North Africa gas sector. Regional and international companies both see Moscow as a rival and will most likely try to deter its progress in that regard by any means available. Yet the main obstacle in Russian businesses’ path to the Middle Eastern gas sector will be economic and connected to Russian domestic issues. Russian energy companies are struggling with low oil prices and international sanctions. These, in turn, limit their ability to finance ambitious and long-term projects abroad.

For instance, in May, Lukoil decided to pull out of the Luksar (Lukoil Saudi Arabia Energy) Co. joint venture established in 2004 to explore and develop gas fields in Saudi Arabia. Experts close to Lukoil told Al-Monitor that Western sanctions prevent the company from obtaining the cheap foreign loans necessary to finance its ambitious projects. Consequently, Lukoil is compelled to reconsider its development strategy. The company is expected to stop participating in a number of other oversees projects that are either risky, financially demanding or not profitable enough. It’s possible that Luksar’s case could be just the first in which international sanctions and low oil prices prevent Russian companies from strengthening their Middle East positions. Consequently, Russia’s success in implementing its Energy Strategy to 2030 may also fall into question.