Moscow and Tehran are willing to tackle multiple challenges to improve their business dealings despite US sanctions. 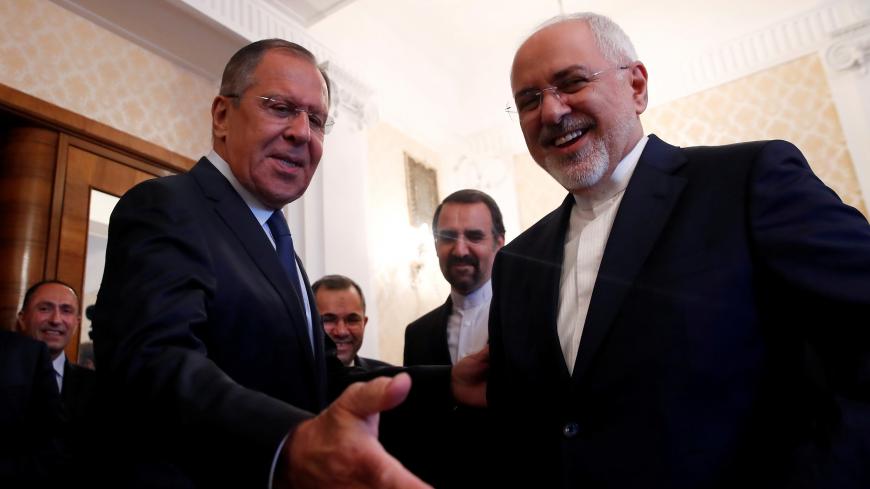 Russian Foreign Minister Sergey Lavrov invites his Iranian counterpart, Mohammad Javad Zarif, to have a seat during their meeting in Moscow, May 14, 2018. - REUTERS/Maxim Shemetov

Russia appears to be taking a long-haul approach to economic relations with Iran, one based on patience and building a solid base for cooperation.

When Iranian Foreign Minister Mohammad Javad Zarif visited Moscow on May 14, his goal was to discuss the future of the Iranian nuclear deal with his Russian counterpart, Sergey Lavrov. The men also used the meeting to discuss the wider agenda of their countries’ bilateral relations, but above all, Zarif confirmed that they seriously intend to continue economic cooperation despite new US sanctions.

Preservation of the Joint Comprehensive Plan of Action (JCPOA) will play a key role in Moscow-Tehran relations. Russia assumes that sanctions on Iran that prevent Western investors from accessing the Iranian economy won’t be lifted anytime soon. Moscow also holds no illusions that Russian business can completely replace the West’s for Iran; instead, Russia is interested in filling niches it finds valuable. At the same time, the Kremlin wants to avoid provoking stronger US sanctions, as they could complicate business for Russian companies in Iran. Hence, Moscow demonstrates a clear interest in securing Iran’s continued participation in the JCPOA.

Moscow is experiencing a slate of difficulties in Iran: the high political and economic risks of doing business there, a lack of transparency regarding economic environments, an absence of effective foreign business protection in Iran, anti-Iranian sanctions, Iran’s isolation from the international financial system and Russia’s own continued technological backwardness.

Both countries face a lack of funds. Moscow doesn’t have enough money to invest in Iran, and Iran doesn’t have enough to pay Russian contractors. Russian businesspeople interviewed by Al-Monitor also mentioned another issue: The Iranians, they say, still believe they are able to bridge relations with the West and return European business to Iran. They see Russian and Chinese businesses as a “last resort.” Consequently, they’re not always in a hurry to work with Russian companies, even those offering the promise of big investments.

Previously, all these difficulties diverted Russian business from Iran. However, Western sanctions on Russia and Russia's economic crisis made Russian businesses less picky and more interested in taking advantage of every opportunity for profit. These businesses also are attracted by their country's improved bilateral political dialogue with Iran.

Finally, the Kremlin and Russian businesses are clearly interested in getting access to the Middle East and North Africa (MENA) oil and gas riches, as well as to the region’s hydrocarbon transport infrastructure. Under these circumstances, cooperation with Iran is becoming vital.

Russia and Iran have been failing to improve their trade performance. For now, it’s obvious that the stated goal of $10 billion to $15 billion in trade, set in 2015, is unachievable in the medium term. Russian experts close to the Kremlin who agreed to speak with Al-Monitor on condition of anonymity said the real targeted level of bilateral trade is far more modest — $3.5 billion within the next three years. Moscow believes it can increase trade volume in agricultural and consumer goods, as well as exports of industrial equipment for Russian-Iranian projects implemented in Iran. In 2017, agricultural trade increased 25%. Iran is becoming one of the main sellers of fruits to Russian grocery store chains. Moscow, in turn, is trying to secure its role as a main grain exporter.

To intensify Russian-Iranian trade and investments, Russian authorities are determined to address the lack of Iranian funds to pay for Russian equipment, Iran’s isolation from the international financial system and the absence of legal support for Russian businesses in Iran. Thus, currently, Russia and Iran are discussing the possibility of forming a free-trade zone between Iran and the Eurasian Economic Union. Moscow also plans to establish direct connections between Russian and Iranian banking systems, including the use of Russia’s Mir debit card payment system in Iran. Moscow has broached the idea of using the Moscow Arbitration Court, under the Russian Chamber of Commerce, to settle legal issues emerging between Russian and Iranian businesses.

In November, to cope with the absence of funds, Russia implemented an “oil-for-goods” program — Moscow’s purchase of Iranian oil in exchange for Russian machinery and investments. This initiative is expected to compensate for Iran’s lack of financial reserves. Last year, Moscow received 1 million barrels of oil from Iran to pay for railroad equipment imported from Russia. Though there had been no oil transfers from Iran to Russian oil companies this year as of late March, the oil-for-goods program might be extended until 2023.

Russia’s patience in Iran can bring positive results for Moscow. Russian companies rushed to Iran in 2017. This trend might continue in 2018: Gazprom Neft, Tatneft, Rosneft, Zarubezhneft and Lukoil have all made serious progress in negotiations with Iranian companies. Moreover, in March, Zarubezhneft became the first Russian oil company to sign a new Iran Oil Petroleum Contract on development of the Aban and Western Paydar oil fields.