Washington’s concerns about Russian actions, including its relations with Iran, and Moscow’s diminishing interest in accommodating them seem set to heighten competition and tensions in the Middle East. 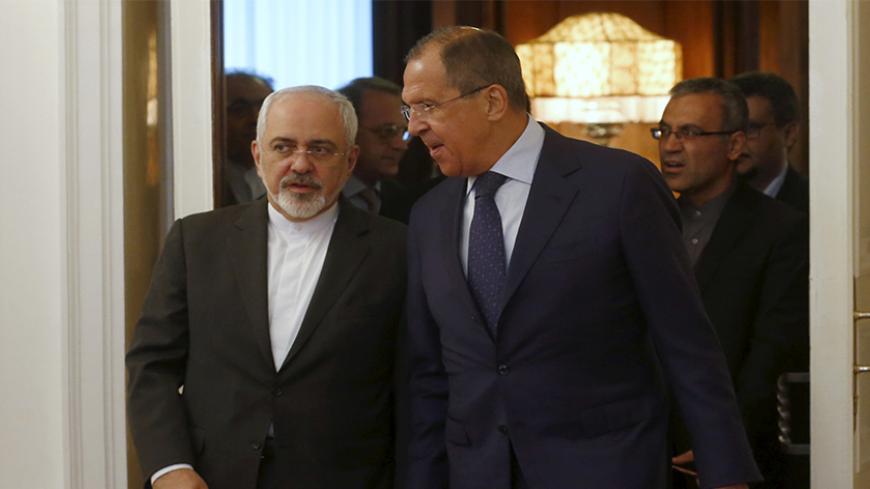 Following recent comments by Russian Foreign Minister Sergey Lavrov and a meeting between Lavrov and his Iranian counterpart, Mohammad Javad Zarif, signs are emerging that Russia and the United States could be headed for a collision over Moscow’s economic relationship with Iran in the post-nuclear agreement era.

Lavrov was characteristically optimistic about Russia’s relations with Iran following his Aug. 17 meeting with Zarif in Moscow, citing “positive momentum” and announcing a planned meeting of the Permanent Russian-Iranian Commission for Trade and Economic Cooperation, probably in October. In welcoming Zarif in front of reporters prior to their discussions, he had been even more upbeat, referring to an “opportunity to take Russian-Iranian relations to a new level.”

Two days later in Sevastopol, Lavrov was forceful in asserting Moscow’s commitment to its ties with Tehran and Russia’s rejection of unilateral US sanctions, including the so-called secondary sanctions, those affecting firms outside the United States that deal with Iran.

Lavrov was in Sevastopol — at the southern end of the Russian-occupied Crimean Peninsula and the site of Russia’s principal naval base on the Black Sea — for a meeting of Russia’s Security Council, chaired by President Vladimir Putin. The decision to conduct the meeting in Crimea was clearly a symbolic one, relaying to Russians, Ukrainians, Americans and Europeans what Moscow thinks about Crimea’s status and Western pressure concerning it.

The Kremlin’s description of the session was terse, stating, “The meeting participants discussed current matters, including economic issues, and also looked at upcoming international contacts.” It also listed those attending. In addition to Putin, the group included Prime Minister Dmitry Medvedev, leaders of both houses of Russia’s parliament, defense and security officials and top aides.

Yet in remarks to the press following the meeting, Lavrov lashed out at the United States and vigorously asserted Moscow’s right to pursue closer trade relations with Iran regardless of US sanctions. Questioned about US scrutiny of Russian-Iranian agreements and possible sanctions, Lavrov said, “The US sanctions are none of our concern. We comply only with our international obligations. In regard to penalties, they include, above all, the ones approved by the UN Security Council’s resolutions. We have no interest in any third-party restrictions that were introduced in circumvention of the Security Council and in violation of the universally recognized norms of international law. So our American colleagues can go ahead and examine them. Perhaps, it would be useful for them to learn that not everything is amenable to their understanding of international law.”

Responding to another question, the foreign minister repeated Moscow’s earlier denials of a reported visit to Moscow by Maj. Gen. Qasem Soleimani, commander of the Islamic Revolutionary Guard Corps' Quds Force, and then reiterated his attitude toward US complaints about Russian relations with Iran: “We commit ourselves to complying with the Security Council resolutions not in order to, as you put it, 'remove the concerns expressed by the Americans.' Concerns come in all varieties. The Americans have lots of them. … So, let’s focus not on the suspicions of the American side or on striving to alleviate their concerns each time they start having them, but on concrete facts. If concerns are justified, we never shun specific discussions. But we are not going to react to abstract and amorphous things each time they come our way.”

Taken together, Lavrov’s comments suggest that Moscow could be prepared to ignore unilateral US sanctions on Iran in pursuit of its economic interests there. For Moscow, the most significant sanctions are likely those that bar foreign banks or other financial institutions dealing with Iran from operating in the United States or conducting US dollar transactions, and that affects companies investing in Iran’s energy sector. Yet Russian leaders may calculate that many key banks and energy firms are already under US sanctions, including Sberbank, which according to its website constitutes one-third of Russia’s banking system, and the state energy companies, Gazprom and Rosneft.

If the Kremlin takes that view, US sanctions might not be a considerable deterrent to Russia’s interest in expanding trade and investment relations with Iran. Mehdi Sanaei, Iran’s ambassador in Moscow, is certainly keen to see bilateral economic ties become “proportionate to [the] capacities of the two neighboring countries,” as he put it in a recent essay laying out 10 reasons why those making “negative remarks” about Russian-Iranian relations after the nuclear deal are wrong.

Still, Lavrov’s comments could well reflect more bluster than policy. It would not be a first for the foreign minister or, for that matter, his president. In the short term, however, Lavrov’s assertive rhetoric is likely to find an appreciative audience in Tehran, where Moscow is trying to conduct a variety of other business, including Syria (which Lavrov and Zarif apparently discussed at length during their meeting) and a long-discussed contract for S-300 surface-to-air missiles that the two sides could sign as early as next week and broader regional security issues.

Even if no new US-Russia dispute arises over Iranian sanctions, Washington’s concerns and complaints and Moscow’s diminishing interest in accommodating them seem set to heighten competition and tensions in the Middle East. Iran is almost certain to be at the center of it all, which would seem to preclude the US-Iran realignment that many US allies apparently fear.