Russian President Vladimir Putin’s role as mediator between Israel and Tehran is gaining importance as turmoil threatens to boil over in Syria. 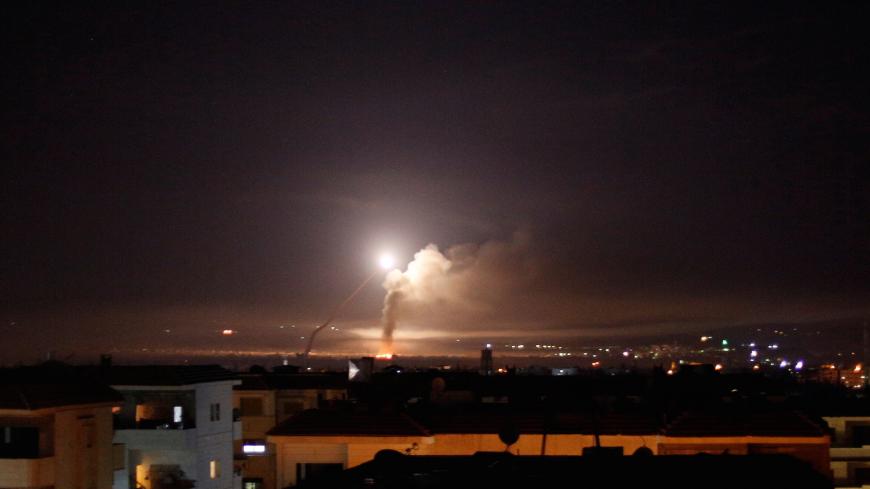 Missile fire is seen from Damascus, Syria, May 10, 2018. - REUTERS/Omar Sanadiki

MOSCOW — Sandwiched between two days this week in which Israel attacked Iranian assets in Syria, Israeli Prime Minister Benjamin Netanyahu met cordially May 9 with Russian President Vladimir Putin in Moscow. The visit came amid reported Russian efforts to ease tensions between Iran and Israel, and followed less than 24 hours after President Donald Trump pulled the United States out of the Iran nuclear deal.

Israel reportedly delivered strikes May 8 on a Syrian army base at Al-Kiswah, where Iran has significant assets, and launched a blazing attack May 10 on numerous Iranian targets in Syria. Israel said it was retaliating for an Iranian rocket bombardment on the Golan Heights.

The timing of Netanyahu’s visit was notable, given the many other rising tensions around Israel: Hezbollah and its allies emerged victorious in the Lebanese parliamentary elections May 6; the United States will relocate its embassy in Tel Aviv to Jerusalem on May 14; the Nakba (“Catastrophe”) — the day Israel was created and the Palestinians were displaced in 1948 — will be commemorated May 15; and on May 16, Guatemala will also open its embassy in Jerusalem, further pushing the trend of foreign recognition of Jerusalem as Israel’s capital.

Against this chaotic background, having Russia’s “friendly neutrality,” if not full moral support, is important.

Netanyahu couldn’t have picked a better date to woo Putin. Victory Day, commemorating Nazi Germany’s surrender in 1945, is an extremely important national holiday in modern-day Russia. In July 2017, the Israeli Knesset approved a bill declaring that Israel, like Russia, will observe the day annually on May 9. (Some other countries, including the United States, hold observances on different days.)

Putin appreciated Israel’s decision and had both Netanyahu and Serbian President Aleksandar Vucic standing with him at the Victory Day Parade in Red Square.

“I would like to once again express my gratitude to you for finding it possible to visit Moscow on our Victory Day. ... We know how the Israelis, and Jewish people in general, relate to the events of the war. And this attitude unites us in many respects,” Putin told Netanyahu.

The Russian side also made a symbolic gesture: In the stands between Putin and Netanyahu, the Kremlin seated a Russian war veteran who helped liberate the Auschwitz concentration camp. Netanyahu said, “Not for a minute should we forget the sacrifices made by these soldiers … who represented the entire Russian people, and among them were around half a million Jews who fought in the war.”

He used that reference to move to the very core of his visit: “Not for a second do we forget this very important history lesson: When such a murderous ideology emerges, we must fight back against it before it is too late … [as] 73 years after the Holocaust, there is still a country in the Middle East, Iran, which openly calls for the destruction of the state of Israel.”

The Israeli prime minister had a number of talking points he wanted to ensure were well-delivered to the Russian side, said a source in the Kremlin familiar with the Putin-Netanyahu meeting. The source, who spoke with Al-Monitor not for attribution, said the first point, a minor one, was Russia’s potential delivery of S-300 missile systems to Syria. Even before Netanyahu’s visit, Israel was signaling to Russia that Israel didn’t favor the delivery.

Moscow had said it was leaning toward not providing Syria with the missiles, but after a US-led strike on Syria last month, Russia isn’t ruling out the idea. Many observers interpreted a bombastically worded statement from Russia as an actual intent to deliver the weapons, but Russia probably considered it more as a deterrent against potential foreign strikes and a bargaining chip in talks with Israel and, possibly, with the United States.

If Moscow indeed goes through with the S-300 delivery, Israel will tolerate it as long as Russians maintain control over the system. If, however, the Syrian military plans to operate the missiles, Israel will have a stronger reaction, but probably not an extreme one.

“The entire Syrian air defense system is based on Soviet- and Russian-made arms. The S-300 is a more powerful system and we wouldn’t have liked its appearance. But as much as we are ready to [take on] Syrian defenses, we would be ready to see how to tackle the S-300,” former Israeli Defense Minister Moshe Ya’alon said.

Ya’alon also revealed that there is a "hotline" between the Russian Khmeimim air base in Syria and the Israeli Kirya command center in Tel Aviv. Ya'alon served as Israel's defense minister from 2013 until May 2016 and helped establish the deconfliction phone line shortly after Russia began its campaign in Syria. The line is thought to have helped prevent a number of serious incidents.

However, Russia and Israel didn’t use the line to coordinate each other’s activities.

This formula appears to be a desired modus operandi for Israel when it comes to relations with Russia on the issue of Iran. This was the second, and obviously bigger, item on the Putin-Netanyahu agenda. Netanyahu reiterated many of the arguments he recently voiced in his largely dismissed presentation of what he called “new and conclusive proof of the secret nuclear weapons program that Iran has been hiding for years from the international community in its secret atomic archive.”

Netanyahu understands he can’t sway Russia from its position opposing the US exit from the nuclear Joint Comprehensive Plan of Action (JCPOA). Therefore, while with Trump, Netanyahu sought to arm the US president with arguments for leaving the JCPOA, but with Putin, Netanyahu seeks to expose the “malignant nature of the Iranian regime” and thus legitimize Israeli efforts at countering it. The latter is a hard sell with the Kremlin, but Netanyahu hopes that there is a chance that if Russia has heard the essence of Israeli concerns, Putin would be (a) more persuasive with Iran on its actions in Syria and (b) have a higher tolerance level for Israeli’s actions in Syria, and perhaps against Hezbollah in Lebanon.

Israel’s concern, according to the source in the Kremlin, is that with Trump’s JCPOA decision, the threat emanating from Iran is becoming even more pressing.

Russia has been acting as a “political shrink,” listening to complaints and fears that Israelis and Iranians have and prescribing them prescriptions of sorts to alleviate their grief. It’s a heavy burden, but also a political resource for Russia and its regional policies. Russia also has its own interests, including in Syria, that are not necessarily aligned with those of Israel or Iran. Taking sides would be folly.

And while the parties still seek to lure Moscow to their own camp, they are also discovering that Russia’s role as the only “go-to” entity for bilateral “matters of life and death” might just be beneficial for them all. Therefore, whereas Putin may have genuine empathy for Netanyahu’s concerns and sincerely appreciate his symbolic overtures, he’d still be interested in listening to the opposite camp and measuring the recent moods in Damascus and Tehran. In this regard, one shouldn’t be surprised to see a high-level visitor or two from Syria or Iran to Russia rather soon.