Why Israel needs Putin more than it needs Erdogan

Reconciliation with Turkey is stalled, possibly due to Israeli-Russian security interests regarding Syria, Lebanon and Hezbollah, as well as Russian hostility to Israeli-Turkish rapprochement. 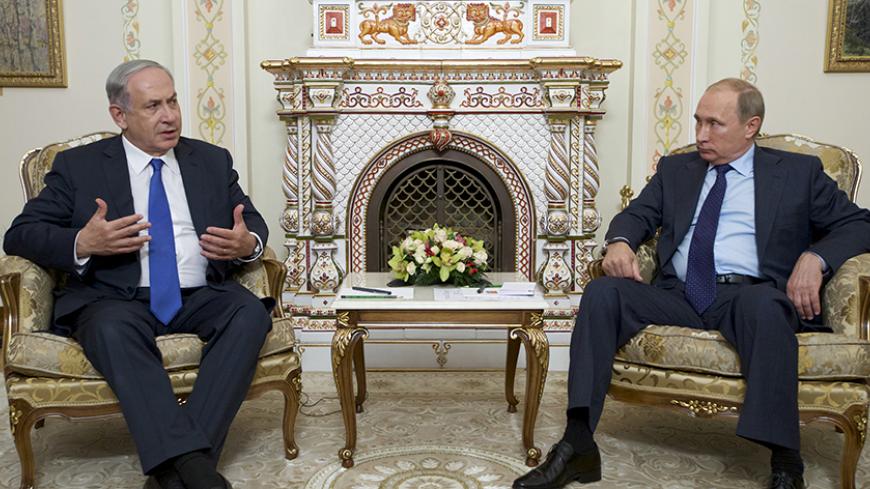 A fascinating and volatile drama has been unfolding in recent weeks around the intrigue that begins in Jerusalem and winds through Moscow, Damascus, Beirut, Ankara, Tehran and Canberra. Israel, Russia, Turkey, Australia and Iran are the key players, while Syria and Lebanon have supporting roles. To the players in the field, the game is reminiscent of a regional chessboard with a lot more than two contestants.

It all began with an official state visit that Israeli President Reuven Rivlin was supposed to have made to Australia on March 17. The visit was scheduled via direct contacts between Jerusalem and Canberra. Israel and Australia enjoy a close, warm relationship, and the Australian government officials were very excited for the visit of the popular Israeli president. They cleared their schedules for him, and one high-level government official even canceled a planned trip abroad.

But then, it emerged that Rivlin was suddenly canceling his visit. The reason: At the moment, Russian President Vladimir Putin is more important to Israel’s security interests. Simultaneously with Israel’s contacts with Australia, the Israeli Foreign Ministry had also been sending out feelers to the Kremlin regarding a possible visit to Russia. After the visit with the Australians had already been secured, the Russians put forward the same date. Rivlin had to decide whether to stick with the Australia trip or insult the Australians in favor of the Russian one.

This dilemma involved very sensitive security strategic interests, and they were raised in a special meeting between Rivlin and Prime Minister Benjamin Netanyahu last week. Netanyahu personally made it clear to Rivlin that there was no choice: A visit to Moscow was absolutely imperative at this time.

Generally speaking, Netanyahu and Rivlin share a strained relationship, with a long disconnect between them. Netanyahu tried to torpedo Rivlin’s appointment to the presidency, and the two have been miffed with one another ever since. But this time, national interests overcame ego issues and personal antagonism. Netanyahu is focusing tremendous Israeli efforts on convincing Putin of the damage caused by Iran and the “axis of evil” connecting Iran, Syrian President Bashar al-Assad and Hezbollah. At the epicenter of the debate are the S-300 air defense missiles that the Russians promised to sell the Iranians years ago but still have not reached Tehran.

On March 5, the Kuwaiti newspaper Al-Jarida reported that Putin halted the transfer of the missiles because Iran violated its earlier agreement not to transfer sophisticated Russian weaponry to Hezbollah. According to the publication, Putin decided to punish the Iranians after the Russians received intelligence from Israel proving that Tehran had recently transferred SA-22 surface-to-air missiles to Hezbollah. According to the same Kuwaiti report, Russian pilots cruising the Syrian skies have recently been reporting that anti-aircraft missiles were locking onto them from Lebanese territory. The assessment is that those missiles are the very ones produced by Russia, given to Iran and then transferred to Hezbollah. It turns out that anything is possible in the Middle East, and actors can find themselves in the crosshairs of the very systems they created. This is exactly what happened to the Americans a generation ago, with the mujahedeen in Afghanistan.

Al-Jarida is seen as tightly linked with Netanyahu’s close associates. Since Netanyahu’s return to the Israeli government in the spring of 2009, his colleagues allegedly have, on occasion, used the Kuwaiti paper to leak information without leaving footprints. Many in Israel and the West view leaks in Al-Jarida as originating Israeli sources, which tends to increase their credibility. According to this theory, Netanyahu asked Rivlin to favor Moscow over Canberra to maintain his momentum vis-a-vis Putin. He wanted Rivlin to present additional materials to Putin that will emphasize the real risks involved, should S-300 batteries also be transferred from Iran to Hezbollah, if and when Putin decides to supply them.

Simultaneously, reports continue to flow from Ankara saying a historic reconciliation between Israel and Turkey has long since matured and been agreed on. So why has nothing been signed on the dotted line? Almost all my sources in this sphere are united in their opinion: It is Netanyahu who is stepping on the brakes. Defense Minister Moshe (Bogie) Ya’alon has also denounced the potential reconciliation several times in recent weeks. It is assumed that Putin does not wish to see a rapprochement between Israel and Turkey, as Turkey felled a Russian combat plane several months ago and since then has been conducting something of a cold war with Moscow.

Thus Israel is in a dilemma: On one hand, it needs to end the crisis with Turkey and normalize ties between the two states, which enjoyed a valuable military alliance in the not-so-distant past. On the other hand, Israel also needs to convince Putin to disengage himself from Iran and Hezbollah as much as possible.

Israel has a clear preference for option B. At this point in time, Putin is far more important to Israel than Turkish President Recep Tayyip Erdogan. The Turkish tyrant is viewed in Jerusalem as a lost cause. The Israeli-Turkish military alliance will not be renewed so long as Erdogan’s party remains in power, and Jerusalem has no illusions. It is clear to Netanyahu that Erdogan is angling for a reconciliation with Israel only because of his political weakness, his problems with Russia, Israel’s natural gas and the fact that his standing in the region is not what it used to be.

The natural gas story complicates things even further, in light of Israel’s clear interests to sell its gas to Turkey and the fact that Russia is competing for the same market. But Putin wins out decisively on all counts: The path he adopted in Syria has upgraded Russia’s status in the region and beyond. Almost overnight, Russia has become an influential and dominant world power. Russia’s deep involvement in Syria proved itself a successful bet. Russia changed the regional reality, redirecting the bloody conflict from a dead end to another path, transformed Assad from a loser to a winner and reshuffled the cards in a Russian display of power and determination. Recently, I quoted a very highly placed Israeli military source as saying “even if a Russian jet flies over Tel Aviv, we will not take it down.” There are endless reasons for the coordination and closeness between Israel and Russia, and Israel’s strategic decision not to do anything to rub the Russians the wrong way.

Israel is now working diligently on tightening ties with Russia at almost any price. Higher-ups in Jerusalem, including in Tel Aviv’s security apparatus, are optimistic. According to senior Israeli sources, the Russians are cognizant of the damage perpetrated by the “axis of evil” and have no intentions of letting Iran become a patron of Syria. Even with regard to Hezbollah, they understand Israel’s stance and are now reconsidering their missile deal with Tehran.

The Russians have their own interests to promote, and they have no special commitment to Hezbollah. They will burn the candle at both ends, trying not to become embroiled in a crisis with Iran in an era when all the world’s global companies are trying to dive into the Iranian economy. On the other hand, they don’t want to help Iran gain the enormous power that it hopes to. Israel, meanwhile, is busy maneuvering within this game plan, while scoring a few considerable achievements for itself.