Russia emerges as a center of gravity for Israel

Given that Russia’s influence in the Middle East excluding Syria remains limited, Moscow is looking for other entry points — but can Israel offer such an opportunity? 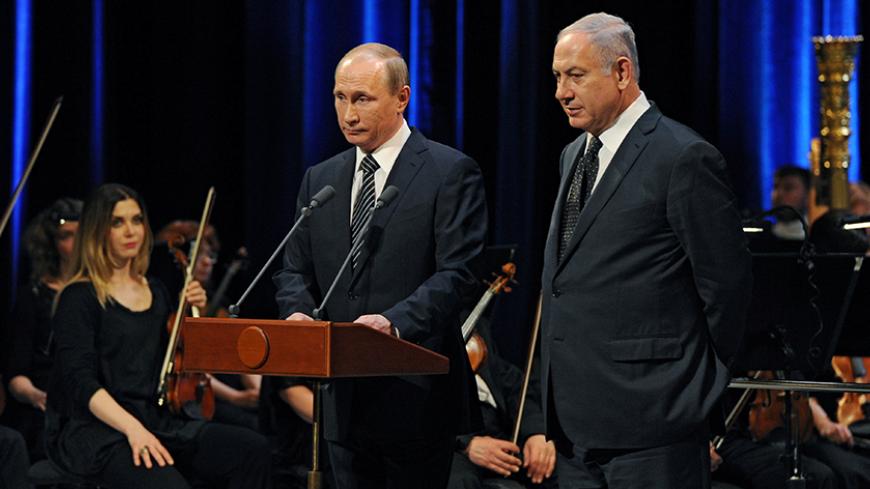 Russian President Vladimir Putin and Israeli Prime Minister Benjamin Netanyahu attend a concert dedicated to the 25th anniversary of the restoration of diplomatic relations between the two countries at the Bolshoi Theater in Moscow, June 7, 2016. - Sputnik/Kremlin/Mikhail Klimentyev/via REUTERS

Israel and Russia are developing a symbiotic relationship that appears strong enough to weather some friction.

As Russian Prime Minister Dmitry Medvedev prepares to visit Israel and Palestine on Nov. 9-11 to facilitate peace negotiations, Russia and Israel find themselves recovering from a diplomatic spat that could not only have derailed those attempts but also soured their relationship.

On Oct. 13, UNESCO adopted a controversial resolution that criticizes Israel’s “escalating aggression” regarding a holy site in Jerusalem known as the Temple Mount to Jews and Haram al-Sharif (Noble Sanctuary) to Muslims. The resolution, which was backed by Russia, refers to the holy site only by its Arab name, which understandably infuriated Jerusalem.

A week later, on Oct. 21, Russian President Vladimir Putin called Israeli Prime Minister Benjamin Netanyahu to congratulate him on his birthday. According to Israeli sources, Netanyahu expressed his disappointment at Russia’s support for the “anti-Israel” UNESCO resolution and protested the move. Putin had to go to great lengths to cushion the blow, eventually dispatching a high-level Foreign Ministry delegation to Jerusalem to explain the Russian position on the UNESCO vote.

Remarkably, incidents like this are uncharacteristic of the general understanding Israel and Russia enjoy across a variety of contexts. Netanyahu might not have been happy to see Russian Sukhoi Su fighter jets interfere in the already-complex Syrian equation, but evidently he found certain benefits in it. Russia and Israel, despite their different visions of a post-war Syria, have one thing in common: Neither wants to see more governments being destabilized in the Middle East, because at the end of the day the spillover of instability threatens them both.

Regarding the Syrian war, Israel’s interests are shaped around guarding its borders from a multitude of perceived threats, including Hezbollah incursions and the group’s growing strength; the Syrian government’s claims to the Golan Heights; Sunni rebels developing military infrastructure along Israel’s borders; and most importantly, attacks by Iran. In this context, the physical presence of Russian forces in Syria may not necessarily be against Israel’s own interests, as it may help contain these threats.

The involvement of Russian officers in Syrian President Bashar al-Assad’s military planning will discourage Damascus from taking any action against Israel, which is as good a guarantee as Netanyahu can expect in current circumstances. The Israeli prime minister traveled to Russia twice this year and insists that he received assurances from Putin that the country’s borders would not be violated in the course of the ongoing war, something Washington, Israel’s closest ally, is presently unable to guarantee. To that end, Moscow and Jerusalem have agreed to coordinate their actions in Syria as well as share intelligence.

Despite occasional cross-border operations, Israel would like to avoid interfering militarily in Syria due to the high risk of being drawn in deeper or provoking retaliation. Intelligence-sharing also greatly benefits Moscow, which receives more balanced intelligence, allowing it to put into perspective the kind of information provided by its allies from the Baghdad coordination center. Initial stages of the Russian operation in Syria showed that intelligence gathered by Damascus and Tehran was not always accurate.

It's not so much Assad that worries Israel, but rather Iran's influence on Assad. Containing Tehran and its allies in the region, including the Syrian leader and Hezbollah, is the endgame for Jerusalem at the moment. Controlling the arms flow to Hezbollah fighters is part of the effort to contain unfriendly forces, and Russia is instrumental in achieving this. After Russia increased its aid to the Syrian government in mid-2014, Israel noticed a spike in deliveries of surface-to-surface missiles to Hezbollah. Jerusalem demanded that the Kremlin control weapons turnover in Syria.

Some sources in Israeli diplomatic circles told Al-Monitor that Russia went as far as to intentionally delay the delivery of S-300 missile systems to Iran for breaking its promise not to transfer Russian weapons to Hezbollah. These incidents encouraged Moscow and Jerusalem to reach an agreement whereby Israel reserves the right to attack Hezbollah convoys carrying weapons that could potentially be used against it, and Russia received assurances that as long as Israel’s territory is not threatened, Israel will refrain from a military intervention in Syria.

Beyond Syria, however, Russia’s influence in the Middle East remains limited. The role Moscow plays in this conflict is the reason its opinion matters to policymakers in the region. Having invested so much effort and money trying to resolve the Syrian crisis, Putin would see it as his own geopolitical loss if he couldn’t cement Russia’s influence in the region beyond the conflict. With this in mind, Russia is actively looking for other entry points that could move it into a position as a key decision-maker in the Middle East in the long run. The Israeli-Palestinian conflict is one such point.

The first signs that Russia’s vision of its role in the Middle East is evolving came in late 2015. Two months into Russia's military campaign in Syria, Putin changed the leading figures: The Foreign Ministry and Putin’s Mideast envoy, Mikhail Bogdanov, were sidelined, and the military intelligence circles came to the fore. As a diplomat in Moscow confirmed to Al-Monitor, Bogdanov was charged with handling a number of “second-tier” issues related to the Middle East where Russia could act as a mediator, including the crises in Yemen and Libya, as well as the Israeli-Palestinian conflict.

In Russia’s view, the impasse in the Palestinian-Israeli peace talks since 2014 presents a perfect opportunity for it to spearhead a renewed diplomatic effort. Given the problems with past rounds of talks, the Kremlin is cautious in its ambitions but has proposed to host Netanyahu and Abbas in Moscow for direct talks, to which both reportedly have agreed.

Russia is unlikely to break the impasse between Israelis and Palestinians, but Jerusalem will play along anyway. The cases of Syria and the Israeli-Palestinian conflict indicate that the United States could be gradually retreating from the Middle East, which would mean that US partners in the region might have to seek new alliances. While remaining wary of Russia’s intentions in the Middle East, Israel may have no choice but to gravitate toward Moscow.