Recent glad-handing between Russian President Vladimir Putin and Israeli Prime Minister Benjamin Netanyahu has sparked interest, and intrigue, in the Middle East and beyond. 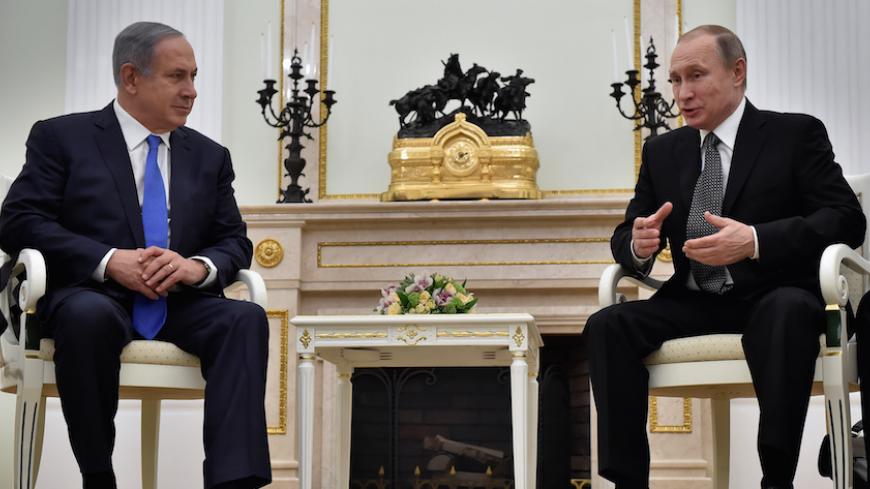 A lot of speculation has arisen over Israeli Prime Minister Benjamin Netanyahu’s meeting in Moscow April 21 with Russian President Vladimir Putin. The last time the two leaders met was Nov. 30. Since then, both have accumulated enough issues to discuss in person, while recent regional developments added the flavor of urgency to the talks.

There were numerous grounds for the speculation: The meeting came three days after Palestinian Authority President Mahmoud Abbas visited Russia; many observers are alarmed by reports in recent weeks of potential clashes between Russian forces and Israeli aircraft; and the Israeli government had its first recent field session in the Golan Heights.

Putin’s press secretary, Dmitry Peskov, denied allegations in the Israeli press that the meeting focused on incidents between Russian and Israeli military planes. The reports were “far from what’s really happening,” Peskov said. Yet Netanyahu’s description of the visit’s objectives — “strengthening coordination … in the security area, so as to avoid mistakes, misunderstandings or in­cidents” — suggests the problem wasn’t left out of the discussion entirely.

Indeed, since the beginning of the Russian mission in Syria, Moscow and Tel Aviv have showcased their successful coordination of military flights there. Even though Russian airplanes’ maneuvers technically violated Israeli airspace repeatedly, Tel Aviv didn’t perceive them as threatening and thus wasn’t prone to taking action similar to that of Ankara, which shot down a Russian fighter jet in November.

But both Israel and Russia seem to agree on the importance of ensuring smooth coordination. According to a member of the Israeli delegation, the talks produced “real results” in that area.

The meeting also touched upon an Israeli-Palestinian settlement, but the topic did not seem to dominate the agenda, sources said. Russia sees that Abbas is touring around Europe to promote France’s idea for a big conference on the Middle East that could, among other things, improve Palestinians’ favor in Arab-Israeli negotiations. Netanyahu, however, recently rejected France’s effort.

Although Russia and Israel value each other’s cooperation, the Russians continue to follow the Soviet tradition of sympathizing with the Palestinian agenda. Some experts in Moscow — including in the diplomatic corps — believe such thinking reflects a Cold War mentality where “the Arab world” is an ally of Russians while Israel is the “American stooge.” They believe it not only contravenes more complicated modern-day dynamics, but also clips Moscow’s wings in its relations with Israelis, who didn’t join in Western sanctions against Russia, and who possess technologies Russia needs to modernize various areas of its economy. Nevertheless, Russia is inclined to support the creation of an independent Palestinian state — which would mean, according to Netanyahu, that a number of Israeli settlements on the West Bank could find themselves existing “illegally in a foreign territory,” with all due consequences.

“The central issues of the Netanyahu visit, however, were Russia’s position on the Golan Heights and arms deliveries to Hezbollah,” a Russian journalist with insights into Netanyahu’s closest circle told Al-Monitor on condition of anonymity.

What reportedly made Israel seek support in Moscow in the first place was the Syrian opposition groups’ hope of using their Washington ties to pressure Tel Aviv regarding Israel’s claim on the Golan Heights. Israel took control of the Golan Heights from Syria in 1967 and annexed the area in 1981. Internationally, however, the annexation has never been accepted.

Assad would certainly want to see the Golan Heights as part of Syria again, but he knows he is not well-positioned to make such a demand under current conditions.

Just as certainly, Israel would in no way agree to that, but even a mere recognition of the Golan Heights as a “subject for talks” would enable Syrian opposition leaders to package it as a grand diplomatic victory. Statements from the US Department of State and the German Foreign Ministry that the status of the Golan Heights should be “determined through negotiations” sounded worrisome to Netanyahu.

Some of the more radical rumors surrounding the visit suggested Tel Aviv would ask for Moscow’s recognition of the Golan Heights as Israeli territory in exchange for Israel’s recognition of the Crimean Peninsula as part of Russia. However, there’s little evidence that such a deal was discussed at the top level. Instead, Moscow believes Israel wants to ensure that the transition period Syria appears to be entering poses no imminent threats to Tel Aviv. In this case, Netanyahu would have been satisfied with a mere recognition of the current borders and lethal consequences of their potential revision. He believes that should the Geneva accords call for acknowledging the Golan Heights as part of Syria, it would make Israel look like a party to the war in Syria — which is in no one’s interests.

Stemming from Netanyahu’s belief that Russia is a major force in the Geneva talks, Israel’s prime minister was positive Putin was the best person to ensure that doesn’t happen. Building on his personal ties with the Russian president allows Netanyahu to secure more understanding of, if not sympathy for, the Israeli standpoint. Indeed, Putin and Netanyahu, both offspring of their countries’ security services, have known each other for 20 years and their personal ties have come in handy in the past.

For Moscow, aligning its pragmatic interests with Syria and Israel — which formally still remain in a state of war — helped build a reality where the main enemy for all three is the Islamic State and other extremist forces. The Kremlin does see that Israel remains fairly vulnerable politically, so Moscow stands firm against whatever front might unite parties against “the Zionist aggressor.” The task for Moscow is thus to project an alignment of these interests into the diplomatic sphere.

Netanyahu also wants some guarantees that Russia will help keep its weapons out of Hezbollah’s hands. Netanyahu’s message sounded strong: Israel will continue to destroy Russian weapons that fall into the wrong hands in Syria. Although Moscow denies arming Hezbollah directly, some of the weaponry it supplies to Assad without a doubt goes to the Shiite group. Israel perceived Russia’s presence in Syria, in part, as a way to restrain the influence of Iran and Hezbollah in the country, as a tactical partnership in the fight against Islamists.

“Israel has reportedly lost more than 100 soldiers and 50 tanks since the campaign of 2006 in its fight with Hezbollah,” a pundit close to the Russian Defense Ministry told Al-Monitor. “So Israel is worried that Hezbollah can acquire weapons that would enable the group to launch offensive operations against Israeli forces.”

After the talks in Moscow, the Israelis said they had the impression that Russia understands their goals, which made some conclude Netanyahu was given some kind of reassurances.

The degree of military cooperation between Russia and Israel has increased significantly over the course of the Syrian war. Moscow perceives Tel Aviv as critical to its Middle East policies, but it is well aware of the potential shortcomings of a full-fledged partnership. Both will continue to navigate within a narrow channel of opportunities while making sure they don’t alienate other partners in the region — which means more meetings of this kind will be taking place in the near future.