Israel's escalated campaign to contain Iran and its Hezbollah allies has provoked fear that a new conflict may erupt among neighbors. 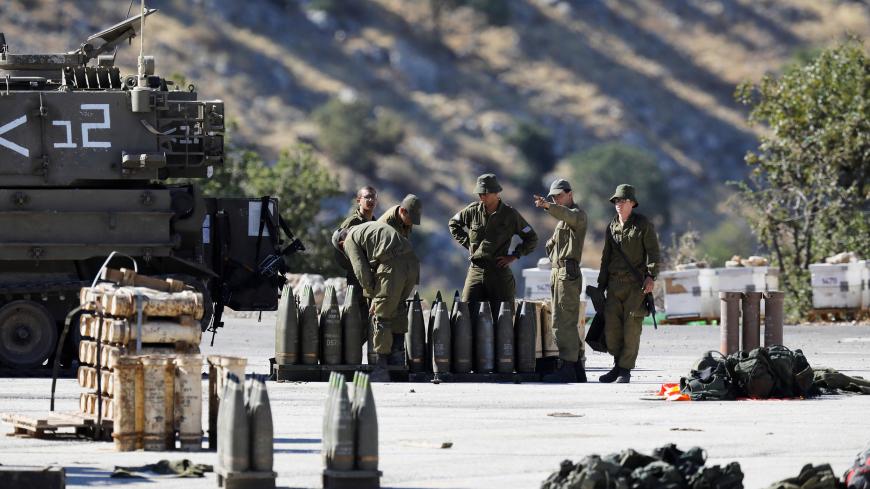 Israeli soldiers stand next to shells and a mobile artillery unit near the Israeli side of the border with Syria in the Israeli-occupied Golan Heights, Aug. 26, 2019. - REUTERS/Amir Cohen

NIMROD, Golan Heights and TEL AVIV, Israel — The clatter of gunfire pierces the evening calm in Nimrod, an obscure idyll perched among the clouds in the Israeli-occupied Golan Heights. Staff at Biktot Baraffel, a local bed and breakfast, dismiss it as yet another skirmish between the Syrian army and pockets of Sunni rebels in Quneitra, on the opposite side of what has long been called Israel’s "boring border" with Syria. But an escalating campaign by Israel to contain Iran and its Hezbollah allies in Syria, Lebanon and Iraq is busting the complacency that has long enveloped the area, with growing worries that conflict between the Jewish state and its Arab neighbors may erupt anew.

Soyossi Koroi is a corporal from the Fijian battalion serving with the UN Disengagement Observer Force. The force monitors the 80-kilometer (49-mile) cease-fire line in the Golan Heights that has been in place since the end of the 1973 Yom Kippur War. He confirmed that things were heating up. “Hezbollah is active on the bravo side,” Koroi said, using the term for the Syrian side of the buffer zone.

This week, the Israel Defense Forces (IDF) reported that it had identified a number of rockets targeting Israel from Syria. The Grad rockets launched from the Aqraba area southeast of Damascus landed 2 kilometers, or about 1.2 miles, short of the Israeli border on the Syrian side. The IDF blamed Iran’s Quds Force for the attack, which came shortly after a series of airstrikes attributed to Israel struck an alleged Iranian base near the town of Abu Kamal on Syria’s border with Iraq. Israel did not comment on the strikes, which are said to have killed 18 triggered the first exchange of cross-border fire between the foes since the 2006 Lebanon war, raising alarm bells across the region.

“Each military action increases the likelihood of an all-out war, which neither side currently wants,” said Elizabeth Tsurkov, a fellow focusing on the Levant at the Philadelphia-based Foreign Policy Research Institute. “Increasing Israeli attacks may lead Iran to believe that Israel is interested in war, and they may seek to preempt it. A Hezbollah retaliatory strike may lead to mass casualties, resulting in pressure on the Israeli government to respond more forcefully, further pushing both sides down the path of war.”

Jonathan Spyer, a fellow at the Middle East Forum, has covered Syria for many years. “The risk of an escalation is certainly a real one," he said. "If Hezbollah had, for example, succeeded two weeks ago in killing five IDF soldiers, as they nearly did, Israel’s subsequent response would have probably been harsh, and a deterioration to a wider conflict could easily have taken place.”

The uptick comes at a critical moment for Israeli Prime Minister Benjamin Netanyahu, who is fighting to remain in power in the Sept. 17 redo elections. Despite critics’ charges of ruthless opportunism, and prosecutors’ investigations of Netanyahu's alleged graft, a large number of Israelis credit their prime minister with keeping the nation safe and deterring its enemies without plunging the country into another war.

Analysts dismiss suggestions that Netanyahu’s decision to expand its attacks to Iraq — including an August airstrike on an alleged Iranian weapons depot — and to Lebanon is a further attempt to clinch electoral victory. “It was a strategic decision and I don’t think that it was influenced by the coming elections,” said Orna Mizrahi, a former lieutenant colonel in the Israeli army who has held key positions in the country’s security and intelligence bureaucracy. She stressed over email to Al-Monitor that while neither Israel nor Iran desired war, “we cannot ignore the possibility of an escalation.” Mizrahi, who is currently a senior research fellow at the Institute for National Security Studies, said “we can’t ignore either” that Netanyahu’s decision to publicly expose how Israel is now operating in Iraq “was influenced by the coming election.”

Spyer noted, “There is some disquiet among Israelis close to the security establishment because of these statements, since the policy of silence was intended to make the other side not feel that it had no choice but to retaliate in order to save face."

Mowing the grass, burning the weeds

Preemptively targeting Iran and its proxies in Syria, or “mowing the grass,” as the Israelis say, remains the centerpiece of the strategy to deny Iran a “land bridge” to its proxies in Lebanon, via Iraq and Syria. Such a route would pose an abiding threat to Israel.

This strategy aims to prevent Hezbollah from adding so-called "smart" precision-guided missiles to its arsenal of rockets, which a senior Israeli official told Al-Monitor number “at least 100,000.” The same source said that, faced with an entrenched Iranian presence in Syria, “it is now out of the question that we leave the Golan Heights to Syria.”

Defense experts argue that Israel’s tactics have proven successful so far. “We have built a system in which we don’t commit errors,” said Yaakov Amidror, a retired major general and former national security adviser to Netanyahu from 2011 to 2013, who continues to advise him on Syria. “The Syrian conflict is not our war. But we have made clear that we have two red lines. That we will not allow Hezbollah and its allies to build bases in the Golan Heights or any new launching pads against Israel," he told Al-Monitor. “We are bombing Iranian facilities and Iranian rockets in Syria wherever we identify them, and we are preventing Iran from building another war machine in Iraq.”

Even Netanyahu’s critics believe the strategy has worked. “I am a left-winger, but I must say the way Netanyahu handled Syria was excellent,” said Ofra Bengio, a senior research fellow at Tel Aviv University’s Moshe Dayan Center for Middle Eastern and African Studies. “We could have easily been dragged into a quagmire. Instead we managed to become a friend of [Russian President] Vladimir Putin and we can attack Hezbollah and Iranian targets freely while remaining on good terms with Russia,” she marveled during a recent interview in Tel Aviv.

Others caution, however, that there is no room for smugness. Patches of grass may be growing into weeds, and containment may no longer suffice.

“Iran and Hezbollah are stubborn and they keep coming,” said Yossi Kuperwasser, a former head of research at the IDF’s Military Intelligence Division and now a senior project manager at the Jerusalem Center for Public Affairs. He suggested Iran did not depend on a land corridor. “The Iranians can fly their weapons to Damascus international airport and to military bases. They are trying to turn Syria into a base manned by the Iranians themselves," Kuperwasser, a former brigadier general, added.

“Iran has more foreigners working with it than [the Islamic State] did at its peak," Amidror, said. "More than 10,000 people came from Afghanistan, Pakistan and Iraq to fight in Syria.” Amidror was referring to thousands of Shiites who are believed to have taken up arms against the Sunni rebels. Many of the foreign Shiite fighters are reported to have died. Their precise numbers, however, are a source of speculation.

With its unrivaled military and intelligence dominance — and unprecedented support from President Donald Trump — Israel seems indomitable. But the prevailing sentiment among many Israelis is that when push comes to shove, they are on their own. Trump is now talking about meeting Iran’s President Hassan Rouhani.

Russia may be easing Israeli strikes through its de-confliction agreements with Israel. “The Russians know we need to do what we need to do,” Kupperwasser said. But Netanyahu’s meeting with Putin yesterday — meant as a preelectoral show to impress the Israeli public of his global stature — was more of a cold shower, with the Russian leader warning his Israeli guest against annexing the West Bank. “I don’t believe Russia will sacrifice a single soldier fighting Iran,” Amidror observed. Moreover, part of the weapons coming from Russia to help Assad defeat the rebels “are winding up in the the hands of Hezbollah,” he said.

Rapprochement with Saudi Arabia and like-minded Gulf kingdoms — spurned by a common fear of Iran — has given Israel a diplomatic boost, but probably little else for now. None of those countries formally recognize the Jewish state, though Oman is rumored to be mulling the leap once a new government in Israel is formed. Meanwhile, Saudi Arabia’s catastrophic military intervention in Yemen is hardly reassuring. As for Syria, “The Sunni countries are not interested in investing what is needed,” Amidror said.

Israel feels compelled to up its game while circumstances are on its side. The Israeli leadership realizes that Trump, who moved the US Embassy to Jerusalem and formally recognized Israel’s annexation of the Golan Heights, could lose the 2020 elections. And Israel’s “freedom to operate may be restricted,” Tsurkov said. “Whether Netanyahu is reelected or not, I believe the current aggressive policy toward Iran will stay on course.”

Correction. Sept.15, 2019: An earlier version of the article incorrectly identified Jonathan Spyer as a fellow of Jerusalem Institute for Public Affairs and omitted part of his quote.