How US strikes could bring Tehran, Moscow closer

The unanticipated US military strikes in Syria have opened a new chapter in the conflict that could eliminate disagreements between Iran and Russia regarding the future of Syria. 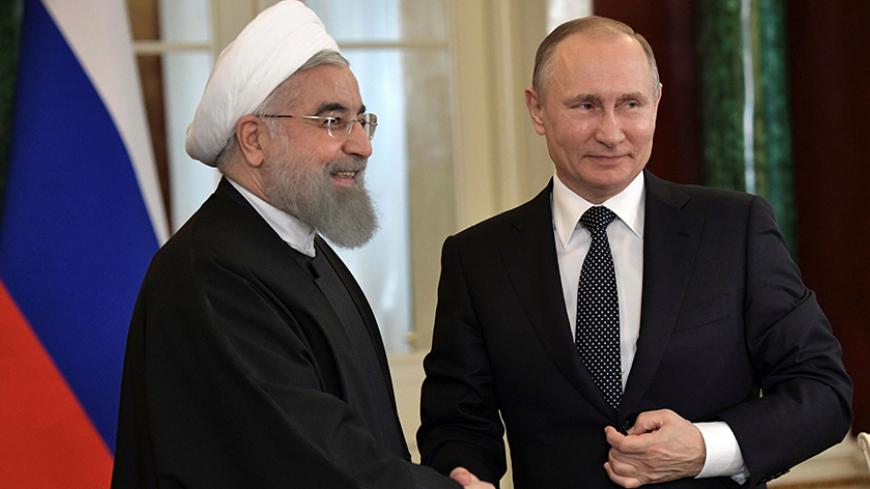 TEHRAN, Iran — Iran’s relationship with Russia has always been characterized by a mix of hope and dread. While one faction in Tehran wants to expand ties, another faction has been traditionally concerned about Moscow’s trustworthiness. The Syrian crisis has, however, brought the two countries closer together given their shared support for President Bashar al-Assad.

Despite the current collaboration, there is constant concern that Russia might turn its back on Iran for a better deal, or that Moscow might maneuver in Syria in a manner that will not safeguard Iran’s interests in the region. The latest boost to this anxiety came from Israeli Prime Minister Benjamin Netanyahu’s recent attempts to attract Russia’s attention. Netanyahu’s March 9 visit to Moscow was conducted with the hope of getting President Vladimir Putin’s approval for Netanyahu's vision of the future order in Syria, which directly impacts the Iranian-Israeli dynamic.

At his meeting with Putin, Netanyahu charged that Iran is spreading “Shiite Islamic terrorism” and urged Moscow to not let Tehran use the Syrian crisis to further its goals against Israel. For his part, the Russian president urged the Israeli prime minister to avoid finding roots to current tension with Iran in “the fifth century B.C.” and to instead focus on current realities. Naturally, Netanyahu’s visit was carefully watched by Tehran, with Iranian Foreign Minister Mohammad Javad Zarif responding to the charges of the supposed historical enmity of Persians toward Jews on Twitter on March 12.

On March 17, 10 days before Iranian President Hassan Rouhani’s visit to Russia, Israel attacked targets in Syria. The next day, Moscow summoned the Israeli ambassador over the airstrikes, without publicizing details of the meeting. As such, when Rouhani departed for his first state visit to Russia, it was clear that a large part of his discussions would center on Syria.

While in Moscow on March 28, Zarif said that Russia could use Iranian military bases to conduct airstrikes in Syria on a “case-by-case” basis. Nevertheless, only a few points from the discussions between Putin and Rouhani regarding Syria were made public. In a joint press conference with his Iranian counterpart, Putin said, “The participation of Russia and Iran, along with Turkey, as guarantor countries in the Astana talks between the representatives of the armed opposition and the Syrian government is an important contribution to advancing a peaceful political settlement in Syria.”

A high-ranking Iranian diplomat told Al-Monitor, “From the very beginning, there have been disagreements between Iran and Russia regarding the Syrian crisis, and this is normal. During the meeting between Rouhani and Putin, there were again discussions regarding this issue. However, it is obvious that we will act based on our own interests and without counting and relying exclusively on Russia’s actions. We knew from the very beginning that there are disagreements between Tehran and Moscow, although, there was also a high level of mutual interests between Iran and Russia with regard to Syria.”

But how serious are these disagreements? Azizollah Hatamzadeh, a Tehran-based scholar and foreign policy expert, told Al-Monitor, “As Bashar al-Assad’s enemies and terrorists become weaker, the disagreements between Russia and Iran will increase and become more obvious. Also, Iran will increase its collaboration with Hezbollah, while Russia will not only not collaborate with them but will likely increase its own collaboration with Israel on intelligence.”

The fact that the Israeli airstrikes in Syria came only days after Netanyahu’s visit to Moscow led some to speculate that the attack took place with Moscow’s prior agreement. One source within the Iranian Foreign Ministry told Al-Monitor on condition of anonymity, “On the surface, it appears that Russia has objected to Israel’s actions. However, this issue can be multidimensional. One theory is that this attack was prearranged with Russia, and that Russia only symbolically objected to it so that no one would question its lack of response. At the same time, a second theory is that Israel really acted on its own and that Russia summoned the Israeli ambassador in order to warn Tel Aviv.”

How long Iran and Russia will continue to collaborate because of their mutual interests — and despite their disagreements — remains an open question. Nosratollah Tajik, Iran's former ambassador to Jordan, told Al-Monitor, “Russia’s entry into Syria lessened Iran’s burden, while internationally it helped a great deal toward solving this crisis. Unfortunately, viewing the matter through an emotional prism resulted in us not being able to properly collaborate with Russia in Syria. Also, Iran’s foreign policy efforts should not be limited to Syria, but instead — and considering all of Iran’s material and spiritual investments in Syria — it should play the strategic game in a way that would help it regulate its regional and international relations.”

The April 4 chemical attack in northern Syria, which claimed scores of lives, opened a new chapter in the Syrian crisis. International reactions have varied, with disagreement on which party was responsible for the strike. In a phone conversation with Netanyahu on April 6, Putin criticized Tel Aviv for saying that it is “100% certain” that Assad ordered the chemical attack, calling it “unacceptable.” Meanwhile, on April 5, Iranian Foreign Ministry spokesman Bahram Ghassemi condemned the incident, saying, “Tehran has always insisted that in addition to the Syrian government, which has been disarmed of its chemical weapons, the terrorist groups should be disarmed as well.”

However, things did not end there. The unexpected US attack on a Syrian air base April 7 opened yet another page in the Syrian crisis. US President Donald Trump, who had previously urged his predecessor Barack Obama not to attack Syria, and had repeatedly said that removing Assad is not his priority, claimed that the missile attack he ordered was critical for US national security. The move turned some of his critics into his supporters while greatly angering Russia.

Prior to the US attack, there was much talk of the likelihood of closer collaboration between the United States and Russia with regard to Syria. But now, relations between the two sides have taken a turn for the worse, with Russia warning the United States about the consequences of its actions. Indeed, on April 7, Russian Prime Minister Dmitry Medvedev charged that the US missile strike was one step away from a clash with Russia's military.

As the relationship between Russia and the United States takes a turn for the worse, ties between Iran and Russia are seemingly improving, with disagreements regarding the future of Syria fading — at least in the short term. As such, it appears that as long as the Syrian crisis continues, the differences between Iran and Russia over Syria will remain quiet, even as the crisis consumes the resources and attention of both countries.