Does Iran even want Russia in Syria?

Despite the stepped-up Russian role in Syria, it is still not clear whether Iran views this development in a wholly positive light. 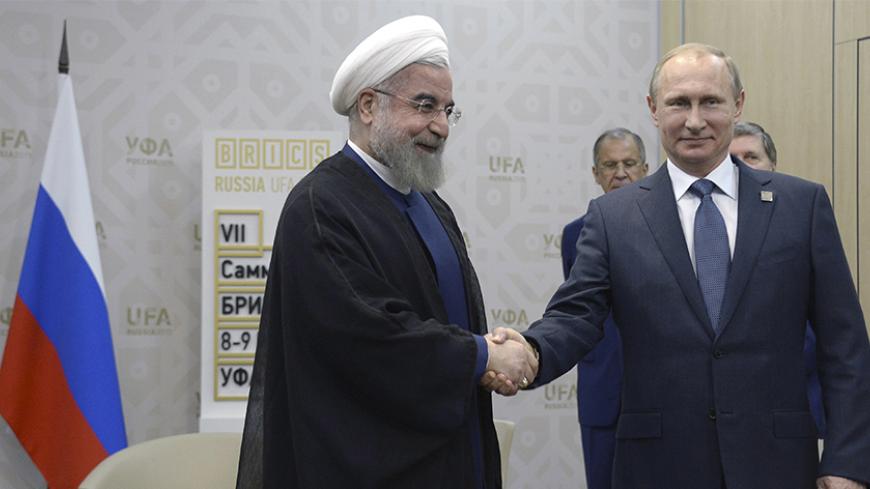 TEHRAN, Iran — The already complex situations in Iraq and Syria have become more complicated following the announcement that an intelligence sharing command base has been formed by Iran, Russia, Syria and Iraq. The base, which is slated to be set up in Baghdad, is geared to enhance collaboration in the fight against the Islamic State (IS).

News of the initiative was originally reported by the Russian news agency Sputnik. It quoted a Russian diplomatic source as saying, “This shared intelligence base will be formed by the representatives of the chiefs of joint military staff of each of these four countries. … The first goal of the base is to gather intelligence regarding the region in the framework of fighting against this terrorist group. After the data is collected, it will be analyzed and will eventually be forwarded to the related organizations in the armed forces of each of these countries.” The Russian source added that “the command of this base will rotate every three months between the member states and the first rotating president will be Iraq.” Russia's official representative to the base, Sergei Kuralenko, further stated that “all four countries will have equal responsibilities in coordinating the fight against [IS]. The responsibilities of each side will be determined by a special charter, which will be soon adopted.”

Although Russian media and Russian officials have been very clear and detailed about the base, it appears that Iranian officials still have their doubts. For example, the Iranian ambassador to Iraq, Hassan Danaeifar, responded to the news by saying, “This is a rumor! It is not as serious as it sounds. Iran has its own plans for fighting against Daesh [IS] in Iraq and Syria. Iran’s plans include logistic, consultation and training, and we are seriously following up on them. We have our own plans and we are depending on those.” In addition, during his recent trip to New York, Iranian President Hassan Rouhani told a gathering of media professionals, “[Russian President] Mr. Putin had personally asked me to form a strategic coalition with him against terrorism in Syria. However, there is no strategic coalition between Tehran and Moscow.”

In the meantime, it appears that Iraqi officials are most eager about the base. The Iraqi prime minister's spokesman, Saad al-Hadithi, told French media that “the intelligence sharing base which is about to be formed is a joint coordination committee between the four countries mentioned. Security issues will determine when this committee will start to function.”

Of note, the United States has not welcomed the formation of this military intelligence collaboration. US Deputy Secretary of Defense Robert Work reacted to news of the joint base by saying, “We were caught by surprise that Iraq entered into this agreement with Syria and Iran and Russia. Obviously, we are not going to share intelligence with either Syria or Russia or Iran. So we are in the process of working to try to find out exactly what Iraq has said. We're not going to provide any classified information to help those actors on the battlefield.”

During the past weeks, Russia has been flexing its muscles in the Middle East. It has sent dozens of fighter aircraft, bombers, tanks, artilleries and commando forces to Syria in order to fight the groups opposed to the government of President Bashar al-Assad. Moscow’s clear desire to increase its military presence in Syria and the region shows that Putin is looking for a new regional order. Russia has already been active in the region, for example, by providing Sukhoi fighters to Iraq, providing political and military support for Syria, as well as maintaining a naval presence in the Syrian ports of Latakia and Tartus. However, Russia’s recent actions show that Moscow is determined to replace Iran and Hezbollah and be the new power in charge of military operations in Iraq and Syria. In parallel, it appears that the Russian government is alarmed about Assad staying in power and is thus pursuing the idea of an Alawite state in Syria’s coastal region. Mindful of the latter, it is evident that the formation of the joint intelligence base, as well as Russia’s direct military presence in Syria, will create multiple problems for Iran.

First, the sharing intelligence and military data can result in Moscow gaining more information regarding the military capabilities of Hezbollah. Considering Israeli Prime Minister Benjamin Netanyahu’s silence and implied consent regarding Russia’s interference in Syria, it is possible that, in the future, Israel can have better access to confidential information regarding Iran and Hezbollah’s military capabilities via Russia.

Second, Iran and Hezbollah have so far paid the highest military and security price in Syria. Russia’s strong presence in the country can easily weaken the strong positions of Iran and Hezbollah, and thus weaken Tehran’s position in future political negotiations on the future of Syria.

Finally, Russia’s reassuring of Israel regarding the new developments in the battlefields in Iraq and Syria makes the situation more complicated.

It thus appears that Iran believes that the potential disadvantages of Russia’s involvement are greater than its advantages. It is against the backdrop of the latter that one may view reports that “hundreds of Iranian military forces have entered Syria in order to perform ground operations inside that country.”

In conclusion, based on available data, it appears that Iran is naturally not willing to concede its supreme positions in Iraq and Syria to another country. However, Tehran will welcome and support Russia’s desire to battle terrorism in the region.