Tehran sees its prospective security accord with Moscow as a stepping stone for wider bilateral cooperation. 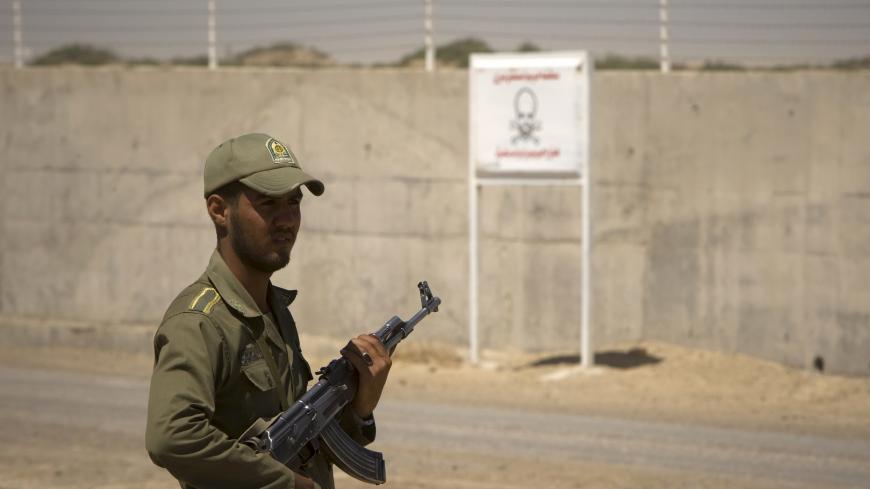 An Iranian policeman stands guard beside the border barrier with Afghanistan near Zabol, Iran, May 20, 2009. - REUTERS/Caren Firouz

Iran's deputy interior minister for security affairs, Hossein Zolfaqari, met with Vasilii Piskarev, the chairman of the Russian Duma’s Committee on Security and Corruption Control, on Nov. 5. At the meeting, both sides stressed the need to finalize a bilateral security agreement and described cybersecurity, the fight against terrorism and countering drug proliferation and illegal immigration as key aspects of such an accord.

One of Iran’s goals in signing such an agreement is to boost its domestic security, particularly considering the threats emanating from Afghanistan, Iraq and Syria, which, to be deterred, require transnational cooperation. For Iran, to engage in security cooperation with Russia, a country that has influence in the region and shares common security concerns, can help increase the impact of its own safety measures.

Tehran and Moscow have signed several security documents in the past. Among these is a document signed in January 2013 by Iran’s then interior minister, Mostafa Mohammad Najjar, and then Russian Minister of Internal Affairs Vladimir Alexandrovich Kolokoltsev, which called for adopting joint measures to fight the proliferation of drugs and countering transnational organized crime. Given the regional and international developments since then, the new agreement is more extensive and places greater emphasis on the need to counter international terrorism.

Although there have been fewer instances of terrorism around the world following the collapse of the organizational structure of the Islamic State (IS), intelligence and analytical reports by various countries see the potential for attacks by IS as high. As a result, the desire by Tehran and Moscow to expand their security collaboration can be viewed as a response to the rising threat of narcotics and terrorism, which in recent years have found more evident transnational dimensions. Afghanistan and the Middle East are the main sources of these threats that impact the interests of Iran and Russia.

According to the UN Office on Drugs and Crime, the cultivation of opium in Afghanistan increased by 63% in 2017 compared to 2016, going from an area of 201,000 hectares to 328,000 hectares. The quantity of narcotics produced also went up from 4,800 tons in 2016 to 9,000 tons in 2017. According to UN reports, the Taliban are one of the main elements involved in the production and export of narcotics while Iran and Russia are among its key destinations. Iran’s seizure of smuggled narcotics has risen by an average of some 15% a year during the past five years. In this vein, Iran’s Interior Minister Abdolreza Rahmani Fazli has stated that about 785 tons of narcotics were confiscated in Iran in 2017, the main portion of which was destined for regional countries and Europe. Of this amount, 24 tons was heroin.

Based on available data, Russia has the world’s largest heroin market in the world, with about 75-80 tons of heroin being annually smuggled in from Afghanistan. The country has about 7.3 million addicts, as indicated by statistics from the country’s Health Ministry and the Federal Drug Control Service of Russia. This data alone show how large a threat narcotics are for Iran and Russia.

Transnational terrorism has also created many shared concerns for Tehran and Moscow. The recent terrorist attacks in Iran are an example of this. These include the June 2017 attack on the Iranian parliament in Tehran, which left 23 people dead, and the September 2018 attack on a military parade in the southern city of Ahvaz, which claimed 25 lives. Meanwhile, in Russia, terrorist attacks in the year 2016 and 2017 left 64 and 36 people dead, respectively.

Although Nikolai Patrushev, secretary of the Security Council of the Russian Federation, has stated that the number of terrorist attacks in his country has decreased from 779 cases in 2010 to 24 cases in 2017, the likelihood of such strikes being carried out in Russia or Iran is still high. This has made both countries realize that effectively dealing with this transnational threat is not possible without transnational intelligence, military and security cooperation.

This shared feeling of threat is one reason for the military-security cooperation between the two countries in Syria. To further strengthen this collaboration, the two sides have signed military accords, one of which is a military-defense agreement that was concluded in January 2015, between Hossein Dehghan, Iran’s then defense minister, and his Russian counterpart Sergei Shoigu. That agreement highlights the need for cooperation for maintaining security and stability and fighting terrorism, separatism and extremism.

Given this context, the new security accord complements existing political and military cooperation documents. By linking the two countries’ security and military organizations, the new agreement can provide a more coherent structure for security collaboration. If signed and implemented, it can make bilateral cooperation, especially in the fight against the proliferation of narcotics and terrorism, more organized and extensive, thus having a greater impact in eradicating these threats.

Furthermore, Tehran’s aim in signing the agreement is not only to improve its domestic security but also to expand bilateral cooperation with Moscow to all aspects of their relations. At the regional level, Iran seeks to utilize Russia’s potential in the Middle East and Afghanistan more effectively and in a more predictable manner. Tehran has no problems with achieving these aims by expanding the sought-after security agreement from a bilateral deal to a framework for organizations such as the Shanghai Cooperation Organization or the Collective Security Treaty Organization.

By promoting its relations with Moscow at these two levels, Tehran is also trying to use Russia’s international potential to reduce US pressures, including the Donald Trump administration’s unilateral sanctions. Considering Tehran and Moscow’s tough approach toward foreign policy, Iran sees security cooperation as a starting point for strengthening relations with Russia at other levels.