Jordan's King Abdullah, who visited Russian President Vladimir Putin in Moscow last week and is in Washington this week, could become a key intermediary between Russia and the Trump administration. 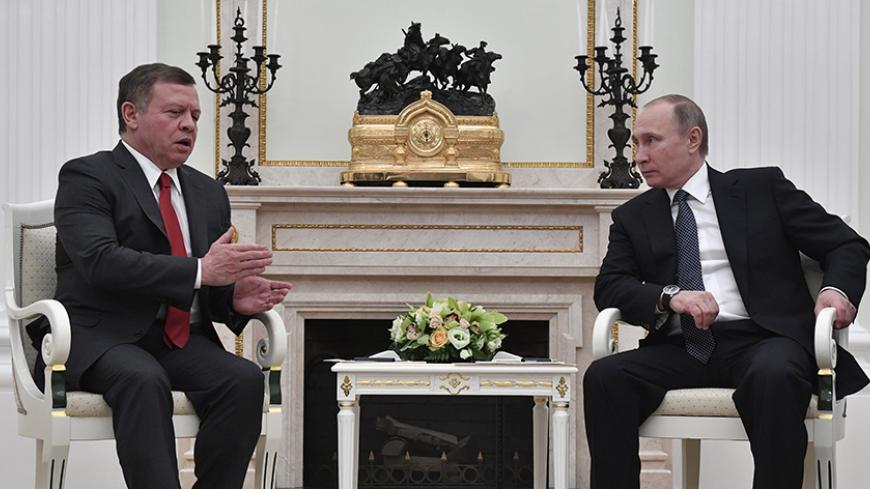 Russia's return to the Middle East as a powerful actor has alienated some in the region and made others suspicious of its intentions. But all regional powers see merit in maintaining a careful balance in their ties with Moscow by compartmentalizing the relationship and separating the most controversial issues, such as Syria and the Iran nuclear program, into separate policy tracks. The Hashemite Kingdom of Jordan has mastered this and reaped enormous benefits as a result. Despite significant disagreements on ways to settle the Syrian crisis and occasional criticism of each other, Russia and Jordan engage in multibillion dollar deals in the energy sector and conclude arms contracts, with Moscow not fearing that its RPGs sold to Amman may end up in the hands of rebels in Syria.

Since his coronation in 1999, King Abdullah has visited Russia 16 times, which signifies one of the most stable relationships that the Kremlin managed to establish in the Middle East. His most recent trip to Russia on Jan. 25 was an element of the trend and was quite different at the same time. The trip came just days after talks between the Syrian government and armed opposition groups had concluded in Astana, Kazakhstan. Abdullah expressed his full support for the Astana initiative and lauded Russia’s role in this process. In response, President Vladimir Putin thanked his counterpart for Jordan's constructive position on peace talks. Looking beyond these purely diplomatic courtesies, Jordan’s support for a Russian-initiated diplomatic initiative is something the Kremlin desperately looks to secure.

The Astana process in its present form is co-sponsored by Turkey, and a deal between Moscow and Ankara over Aleppo and the Turkish-Syrian border are the main founding blocks of this process; hence the cease-fire brokered in December is heavily focused on northern Syria. The truce has significantly decreased the level of violence in Aleppo but failed to produce similar results near Damascus and farther south in Daraa province. While it appears that the Syrian government was able to withdraw some of its forces from the south for the Aleppo operation thanks to a temporary de-escalation that was likely negotiated with Jordan by Russia, Moscow is looking for a more lasting solution there.

It is not clear whether Putin would like to invite Abdullah to become the fourth co-sponsor of the Astana process and the underlying cease-fire, but it would be the logical next step. Thus, the king’s visit could be interpreted in the context of the Kremlin’s efforts to shore up support for the process among powers that have significant military and logistical leverage in the conflict. Russia’s hopes aren’t entirely groundless given that the December cease-fire is so far the only international effort backed by powers that are directly involved in the conflict. Jordan’s value, however, is not based on its military support to the opposition, which is minimal, but in the fact that it harbors rebel groups and allows their supply routes to operate. Russia may be envisioning a wider role for Amman in the Astana process in exchange for its sealing the border with Syria and putting a cap on rebel ambitions to expand their area of influence in the south.

Control over the Jordanian border is crucial for the United States and Saudi Arabia, who train rebel groups on Jordanian soil as well as send batches of weapons to Syria through the border. Ever since the launch of the Russian military operation, Moscow and Amman have been inching closer to cooperation on Syria. In October 2015, the two established a joint center in Amman that serves as an effective intelligence-sharing channel and helps coordinate actions in southern Syria. Moreover, when the Russian Su-24 was shot down by a Turkish warplane in November 2015, Putin chose his meeting with Abdullah to deliver an emotional speech slamming Ankara for the attack where he pronounced his now famous “stab in the back” metaphor. There is no doubt that Abdullah gave prior consent to a discussion of the incident in front of the cameras and, to much surprise, he played along by referring to the shoot-down as an act of terrorism. Deep understanding between Israel and Jordan on Syria, as well as nonformalized cooperation between Israel and Russia to shield the former from Hezbollah, make a trilateral alliance in the south between these states all the more needed and practical.

This week, Abdullah is visiting the United States to meet top US officials. The Jordanian king, who is expected to greet Trump Thursday at the annual National Prayer Breakfast, will become the first Arab leader to meet this controversial politician in his new capacity. Terrorism will undoubtedly become the main topic of the discussion, and as America’s new anti-terrorism policy is still in the works, Abdullah could also act as a messenger for Putin, who has not given up on the idea of a global anti-terrorism coalition spearheaded by Russia and the United States. It is probably not a coincidence that Trump signed the memorandum instructing the US military’s Joint Chiefs of Staff to develop a plan to defeat the Islamic State on the same day he had his first phone call with Putin.

Jordan does seem to be the power best positioned to act as a mediator between the United States and Russia in developing the contours of a hypothetical joint policy against terrorism in the Middle East. Apart from coordinating the actions of its air force in southern Syria with Russia, Amman also hosts the Military Operations Center that operates under the supervision of the United States, Saudi Arabia and Jordan; the center supports rebels of the Southern Front. Jordan, one of the few remaining stable states in the region, is seen as a crucial ally for any efforts against terrorists both by Russia and the United States and could in fact facilitate their communication through existing Amman-based mechanisms.