Jordan has been moving closer to Russia since Moscow gave it a growing role in Syria, a role that could include acting as a buffer there between Iran and Israel. 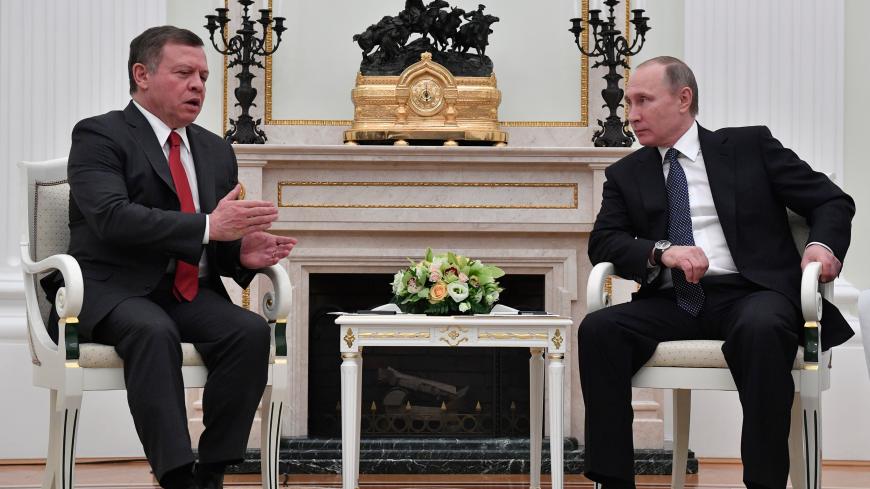 Jordanian King Abdullah visited Russia last week for the 20th time in 18 years, but this trip was far from a routine encounter with Russian President Vladimir Putin.

The countries' ties have been strong for decades. If the frequency of diplomatic gestures is an indication, Jordan appears to be Moscow's strongest ally in the Middle East. Yet despite a solid record of cooperation, as well as a certain chemistry between Abdullah and Putin, Amman never really played a prominent role in Russia’s Mideast strategy, including in Syria. This approach, however, got a review last year when Russia was faced with the challenge of implementing de-escalation zones in Syria, specifically the one along Jordan's border. Along with the old challenge of an Israeli-Palestinian settlement — which recently became even more complex — the need to settle Syria's civil war took center stage at the Abdullah-Putin meeting Feb. 15.

Russia’s and Jordan’s interests in the region are uniquely aligned at the moment, allowing the two to explore opportunities for cooperation that go beyond routine interaction. Jordan essentially became a linchpin of Russian policy toward southern Syria when the kingdom played a key role in negotiating a de-escalation zone that spans across Quneitra and Daraa provinces and borders Israel and Jordan. During his visit to Moscow, Abdullah boasted about the two countries’ active dialogue on Syria — and the southern de-escalation zone is where this dialogue is most visible. Since 2015, the two countries have operated a joint center in Amman to share intelligence on the situation in southern provinces and coordinate military action. The agreement between Russia and the United States on the de-escalation zone at Jordan's border became possible thanks to the king's participation.

Russia and Jordan do not necessarily see eye to eye on the Syrian conflict, but since the de-escalation zones were announced, Amman has been gradually adjusting its position regarding the Syrian government. Jordanian officials no longer see Syrian President Bashar al-Assad as a threat and even go as far as to claim their relations are back on track. The perceived improvement of ties between Damascus and Amman was arguably facilitated by a new understanding in the south, where Amman no longer saw a threat to Jordanian borders.

The Russian plan to give Jordan an active role in settling the Syrian conflict was part of the strategy to create an environment — or the illusion of one — of a Sunni Arab power normalizing relations with and accepting Assad. It is not surprising that Abdullah was susceptible to Russia’s plan: The West hasn't acknowledged Jordan's accommodation of Syrian refugees and has failed to nurture a strong resistance to Assad in the south. These omissions led Amman to look for alternative partners, and Russia was readily there. Abdullah's realignment with Russia resulted in his dwindling support for training Syrian opposition on Jordanian soil, and prevented a much-anticipated US-led push against the Islamic State (IS) from Jordanian territory in 2017.

The most recent round of escalation between Israel and Iran in Syria caught both Russia and Jordan off guard. Iran’s attempts to test its opponent’s capabilities in the south, and Israel’s ambition to expand its buffer zone in Syria, threaten the de-escalation zone. This situation was the central topic of the Putin-Abdullah meeting, since renewed instability in the south not only threatens to erase the political progress of last year but also presents a far more complex security challenge to both Russia and Jordan. What for a long time was a battleground between the Syrian army and the opposition might now morph into a full-on turf war between Israel and Iran.

The ongoing offensive of the Syrian government and Iran in Eastern Ghouta — in clear violation of the agreements — may also bode ill for the de-escalation zone in the south, as both the southern front and Israel now see another land grab as Damascus' next possible step. Because of this, Israel is seeking to establish a buffer inside Syria through financial and military support to opposition groups inside the de-escalation zone. The zone is already on the brink of collapse, with several rebel factions there calling for attacks on government-controlled territory in retaliation for the Eastern Ghouta campaign. Israel and the United States will consider any military action by the Syrian government in the south to be crossing a red line.

It was this sense of urgency to prevent the derailing of an agreement co-sponsored by Russia and the United States — a crucial element in Moscow’s plan to settle the conflict — that brought Abdullah and Putin together. The de-escalation zone in the south was designed to help Russia gradually disengage in the area militarily (despite keeping observation posts on the zone's border) and act as a sponsor of talks on a new modus vivendi between Israel and Iran. This, however, is unrealistic without a working de-escalation zone that is respected by all parties.

Moscow feels comfortable acting as a go-between in Iranian-Israeli talks, but being militarily sandwiched between the two would put Russia at odds with both of them. To prevent another spiral of violence in the south, Russia hopes Jordan will project its influence on the southern front to act as a buffer between Israel and the Iranian-backed forces while Moscow seeks a workable path to their coexistence in Syria.

Jordan’s capacity to influence Syrian rebels has significantly diminished as training programs and foreign funding have decreased. Russia needs to be extra careful about the extent of its partnership with Iran in southern Syria, which ultimately affects Moscow’s relationship with Israel as well as its standing with Sunni Arab powers. In this context, Jordan becomes a tested partner that is accepted by Iran and Israel, but also brings with it a degree of recognition of Russian efforts by the US and Arab powers, something Russia has been struggling to earn in Syria.